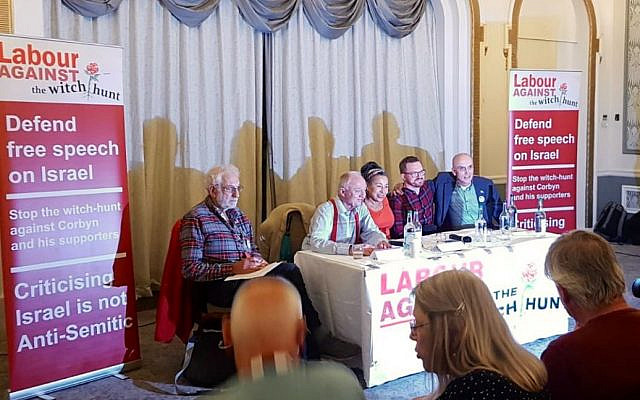 A Labour Against the Witchhunt event taking place during the Labour conference (Credit: HOPE not hate/Jewish News)

By the time most people read this Rosh Hashanah will have been and gone and we will be getting ourselves in gear for Yom Kippur and a whole lot of contemplation.

I freely admit to being — if not the worst Jew in the world, there are plenty of candidates for that title — not as good a Jew as I could be. Yet I like to use the opportunity of the chagim to think about what has happened in the last year, how I could have done better, or behaved better, possibly even written better.

Reeling fresh from Labour’s Party conference in Brighton as I write this, I’m moved to wonder about the whole structure of party conferences and how they operate. And I have come to the depressing conclusion that — apart from the plenary debates which are supposedly there for the express purpose of making or changing policy — conferences are a giant con.

The fringe meetings seem to be held to reinforce already existing prejudices. Anyone who might venture to voice a dissenting opinion, or challenge a narrative, is met with a fusillade of verbal, and occasionally physical, abuse.

So convinced are the organisers of these events of their own moral rectitude that they go to enormous lengths to prevent anyone who disagrees with them from even attending their meetings. Thus, in Brighton, there was the ludicrous spectacle of the Labour Against the Witchhunt crew making prospective attenders gather outside Ben and Jerry’s ice cream parlour, so that the audience could be escorted by the Witchhunters to a previously secret location.

I have to advise that on this occasion the audience did not include me, since the Witchhunters had already told me that I was not welcome at their meeting — they told me I was “hostile”. Gosh, guys, ya think? With a line-up including Asa Winstanley of the Electronic Intifada, Ken Livingstone who needs no introduction, Jackie “Jews ran the slave trade” Walker and the egregious Tony Greenstein?

Well, perhaps it is true that I would have been hostile. But it might also be true that I would have been curious. I would really like to know why some of these people, to use the unimprovable words of a late editor of mine, seem to hate Jews more than is strictly necessary — although nobody, of course, would accept that antisemitism is involved in their attitude to Israel.

During my stay in Brighton I went to a number of what might be termed “anti” meetings. With the honourable exception of Shadow Foreign Secretary Emily Thornberry, not one speaker acknowledged that there might be another side to the narrative, that Israelis might be terrified when there are rocket attacks, that Israeli children run screaming to air raid shelters, that Israeli families have been murdered in their beds.

Not for a moment will I say that everything Israel does vis-a-vis the Palestinians is right. There are clearly many stupid, unjustifiable examples of behaviour, and they are compounded by sometimes appalling political pronouncements which make some of us in the diaspora shudder.

But. The ability to hear and see what the other person is saying is paramount. I learned a lot in Brighton and some of it made me cringe. So my Rosh Hashana and Yom Kippur resolution is to listen — and I would hope that might be reciprocated by the other side. To accept that truth is a many-sided conceit and we, on our part, do not have all the answers. Nor do they.