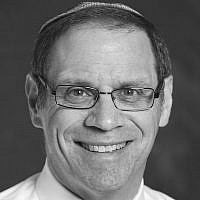 The Blogs
Mark Dratch
Apply for a Blog
Please note that the posts on The Blogs are contributed by third parties. The opinions, facts and any media content in them are presented solely by the authors, and neither The Times of Israel nor its partners assume any responsibility for them. Please contact us in case of abuse. In case of abuse,
Report this post.

NEW YORK (JTA) – In a recent JTA Op-Ed, Rabbis Marc Angel and Avi Weiss made a number of claims about the Rabbinical Council of America’s conversion system. While some of their arguments have merit, they paint only a partial picture of what we’re doing in the North American modern Orthodox community. And some of their arguments are just wrong.

“The Israeli government recently moved to decentralize the conversion system by allowing local courts to convert individuals on their own.”

Yes and no. Conversion authority was extended only to courts run by municipal rabbis. Most rabbis in Israel still are not authorized to perform conversions. In fact, the new system is an Israeli version of the RCA’s current structure.

“The RCA accredits only those conversions conducted under RCA’s batei din, or rabbinical courts, using the GPS process.”

Individual rabbis are not barred from conducting conversions, and those who do still perform their own conversions find that they are accepted in their communities and by those who respect their conversions (no different than the model advocated by Rabbis Angel and Weiss). If the halachic standards of those conversions are accepted by the RCA’s Beth Din of America, then even those privately conducted conversions will be widely accepted. The advantage of the RCA’s system, known as GPS (for Geirus Policies and Standards), is that conversions performed by its rabbinic tribunals are guaranteed to receive the support of the Beth Din of America.

Yes, centralization has the potential for corruption and abuse. That is why there were checks and balances built into the GPS system, why we do our best to ensure our batei din are comprised of people of integrity, and why – in light of the lacunae identified in the Rabbi Barry Freundel case – we are reviewing the entire system with a commitment to improve it.

But a decentralized system is also subject to corruption and abuse – even more so. Who supervises the individual rabbi and protects the conversion candidate from the same possible abuses that Rabbis Angel and Weiss are concerned about? Who protects that rabbi from undue political and financial pressures that may compromise his judgment? Who protects converts and their descendants from rabbis who “sell” conversions or whose conversions are not widely accepted?

Perhaps Rabbis Angel and Weiss are correct when they write that a “centralized beit din system almost invariably relies on the most stringent opinions of halachah, or Jewish law.” This goes to the larger question with which we struggle in many areas of Jewish law: What are proper halachic standards in any matter? Who has the expertise, authority and responsibility to make these decisions? How should decisions be made when they affect not only individuals but entire communities or the Jewish people? How do we responsibly navigate halachic disputes so that we respect diversity while maintaining integrity?

As in other areas of Jewish practice, we are directed by the guidance and decisions of our poskim – respected senior rabbis whose learning and experience have made them vital in setting standards for our community.

Yes, a more structured, less personal system can be more stressful than an ad hoc one. Rabbis Angel and Weiss cite incidents of insensitivity by regional batei din and rabbis. I do not deny such incidents have occurred, but I can cite many more instances of positive and warm interactions. In addition, sponsoring rabbis – who have an ongoing personal relationship with the prospective converts — are an important part of the GPS process.

And individual rabbis in a decentralized system can be insensitive, too.

We need to affirm and support rabbis in the GPS system who are doing it right and work with those who need to do better. Ultimately, widely accepted accreditation of one’s conversion reduces the stress for converts in the long run.

A centralized system limits access and results in fewer conversions.

I agree with Rabbis Angel and Weiss that all sincere and appropriate candidates for conversion should be converted. But they ignore the fact that the rate of those who successfully complete the GPS conversion process is very high. Meanwhile, the GPS Review Committee is evaluating ways we can improve.

“Out of town” cities suffer.

Yes, there are only 12 regional batei din and this creates inconveniences, even burdens, on some prospective converts. Are there ways to be more accommodating? Perhaps. This is something the Review Committee needs to evaluate. But in the long run this is a small price to pay for the benefits of an appropriate regional system.

Have local rabbis been undermined by the centralization of kosher supervision? By the handling of divorce cases only by experts and a handful of recognized batei din? By the practice of using only leading rabbis to resolve questions related to agunot – “chained” women whose husbands refuse to grant them divorce documents? By the use of yoatzot halachah – women extensively trained in matters of Jewish family purity laws – to advise women in this area that traditionally has been the purview of local rabbis?

By the same token, no one is suggesting that only select rabbis be able to perform weddings.

We have evolved over time a hybrid system here in North America that combines both decentralized and centralized rabbinic responsibility in order to best serve the personal pastoral, spiritual and halachic needs of the community.

Pre-GPS conversions are being questioned.

Conversions always were subject to scrutiny when converts moved to new communities or needed to prove their Jewish status for one reason or another. This is the unfortunate reality of a system of law. Even before the GPS system, not all conversions received the stamp of approval of the Beth Din of America.

Just as centralized kosher supervision raised confidence in and delivery of kosher food and addressed many of the inconsistencies and scandals of earlier generations, GPS is meant to do the same.

Although we disagree on the issue of centralization, Rabbis Angel, Weiss and I all agree on the vital importance of “the welfare of converts, our communal health and our religious vitality.” We just have different formulas for getting there.

The GPS system may not be perfect, but we believe the alternatives are not as good. Can we do better? You bet. And we will. Because like Rabbis Angel and Weiss, we are passionate about the well-being of converts and the Jewish people.

About the Author
Rabbi Mark Dratch is the executive vice president of the Rabbinical Council of America.
Related Topics
Related Posts
Comments