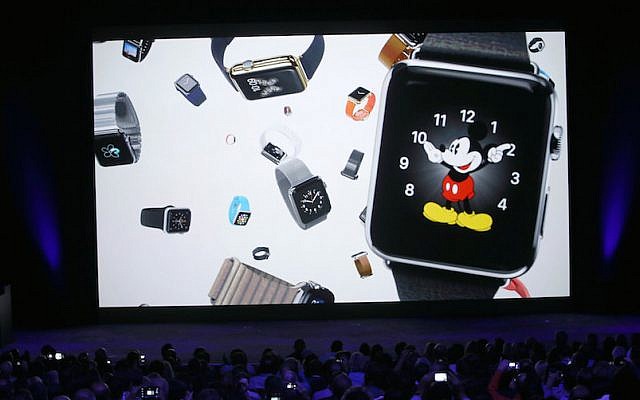 The Apple Watch introduced on stage at the Flint Center in Cupertino, California, on Tuesday, September 9, 2014 (screen capture: YouTube video)

A dear friend of mine was recently Skyping with me, and we discussed his planned purchase of a new television. His old television is over six years old, which is equivalent to 5000 years on Pluto. So clearly, the time has come for a new TV.

He spent a significant amount of time reading up on all of the latest options, and surfed through YouTube, listening to video clips about the latest TVs. Something frightening happened. I almost dare not mention it here. He came to realize that the TV he had was still pretty good.

Yes, this was a shock to me to. We are very used to a society where technology leads people to replace perfectly working devices with more advanced, less perfectly working devices. Every time Apple comes out with a new iPad, it really doesn’t matter what features it has, including pink and purple polkadots. No matter what, there will be a line that goes three times round the block, of people who must be the first to have it. And when they get it, they go back to surfing the same websites they were surfing before, most of which do not benefit from the newest features.

This long introduction is meant to lead us to the question: do we need smart watches? There is no question that there has been a tremendous amount of hype around this latest version of wearable technology. In fact, you know that there must be something to it, if Apple has a version of such a device. Remember that Apple does not have a version of Google Glasses. Despite the fact that I believe in Glasses technology, it is interesting that Apple has apparently avoided this entire niche.

When talking about watches, you must be very specific about the date. I specify this because watches are actually changing very quickly, and new versions with new sensors and new connectivity are coming out multiple times a year. The market is already full of options, as each version tries to distinguish itself from the other.

Let’s jump to the question: I am not 25, I do not jog, I have little interest in my pulse or oxygen saturation on a second by second basis, and although I should be concerned about my sugar and blood pressure, I am not. So why would I buy a watch?

That might not sound like a huge difference. The idea that an entire type of technology exists simply because people are too lazy to reach into their pocket to pull out their phone, seems ridiculous. Well, it might seem ridiculous but it’s true. There are countless tests, that are done by all types of manufacturers, to assess the usability of a technology. The idea is to see if people are comfortable with a device or piece of software. This was in fact a major issue in Microsoft, that they had specialized usability labs to see if their Office products were comfortable to use. If a person struggled to find a sort function in an Excel spreadsheet, that was a problem. And on that basis, Microsoft would modify their software.

Imagine the following scenario. A 70-year-old patient is meant to take his medications on a regular basis over the course of the day. The information pops up on his mobile phone, and on his smart watch. When he hears his phone activate, he reaches into his pocket and takes the phone out. He must now wake the phone up, and possibly even find the application that allows him to indicate that he is presently taking his pills. Imagine that this patient has Parkinson’s disease or any number of neurological disorders that make it difficult to get to the phone, extract it from the pocket and then hold it steady. It would not be a pretty picture.

Now imagine the same scenario on a smart watch. The software developers would of course realize that on a smart watch, you have a very small interface. As such, you would expect that the smart watch would speak the message as well as display a few words on its small screen [such as “medication time”]. Smart watches know where they are in space, and where they are relative to the wearer’s eyes.

So, once the smart watch has detected that the user has been looking at its screen for, say, two seconds, the screen can change to a big red button, with the additional voice notification that says “click me when you have taken your medications”. Even for a patient with a neurological disorder, or decreased sensation in his fingers or almost any other limitation, the watch interface is clearly superior than the phone interface.

I should add that one time while being busy with some activity, I had to use my nose to click on an element on the screen of my smart phone. So even for a person with a single arm, they could speak to their smart watch or even use a another surface to click the single button.

A watch’s ever presence on the wrist of the user, and it’s touch and voice interactivity, make it far more ideal for receiving and responding to notifications. For a patient or a physician or any person with responsibilities that require near immediate responses, a smart watch is an excellent accessory. I personally hope that smart watches will continue to load up on various sensors. Imagine a smart watch that can detect certain toxins from a distance.

Imagine an episode of CSI where the agent only need pass his or her hand over a crime scene in order to record an entire 3-D image of the space, along with a chemical analysis of all of the objects in the area. While this is presently beyond the capabilities of smart watch technology, it definitely is coming. In the hospitals, a smart watch that can detect bacterial presence from a short distance could warn a physician if he or she is about to touch a surface or patient that is covered in toxic bacteria. At the very least, the watch could warn the physician to wash their hands after the encounter.

Unlike the latest curved, 80 inch, smart, super 4K TV, smart watches are a justifiable upgrade or addition to a person’s digital accoutrements. In time, I expect smart watches to become as essential and commonplace as mobile phones.  And as soon as they make a smart watch that looks like Batman’s, I’ll seriously consider getting one.