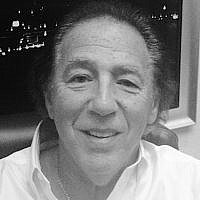 The Blogs
Ron Dolinsky
Apply for a Blog
Advertisement
Please note that the posts on The Blogs are contributed by third parties. The opinions, facts and any media content in them are presented solely by the authors, and neither The Times of Israel nor its partners assume any responsibility for them. Please contact us in case of abuse. In case of abuse,
Report this post.

My Christian friends and acquaintances, and many Jews, ask why anti-Semitism is exploding around the world. Well, the explanation is complicated, and that means long. So let’s get started. The history of the human race has been conflict and conquest. A glance over our shoulders reveals that many cultures have been wiped out at various points in time by “control the world” aggressors: Persians, Romans, Mongols, European colonializing powers, including almost all of Western Europe, the Austro-Hungarian Empire, and Russia, AND the Ottoman Empire. Various indigenous peoples of South America, North America, and Africa are just some of the examples of cultures “cleansed” by autocratic nations.

Jews as tribes, and as individuals, have been the target of aggression for almost as long as there have been Jews. They have not only been targeted by those colonizing countries, but also by power-hungry rulers who have hijacked religious institutions as a platform for their hegemony. But Jews have survived, and not without having paid the steepest price in the history of human-kind. Maybe the Jewish people have just been unlucky in their choice of enemies; but there can be little doubt that the power elites of Christianity, followed by Islam, and more recently the Nazi Third Reich can be considered responsible for the diminutive size of the Jewish population, worldwide, to be somewhere around only 14 million. One doesn’t need to be a social scientist to conclude that the growth of the Jewish population has not kept pace with the growth of the population of many other cultures around the world.

There can be little doubt that Jewish monotheistic belief in God resulted in the almost total annihilation by the Romans; or that worshipping the wrong God resulted in the inquisitions of Christianity and similar forced conversions and murder by Muslims of Jews. Recent research has revealed that Hitler identified Jewish beliefs as untenable for his goal to make Nazism the world religion. And it’s hard to say whether the root causes that have been given over the centuries were “legitimate” in the eyes of the oppressors or just excuses for the atrocities:

Christianity said that Jews were responsible for the death of Jesus, and despite the Roman Catholic Church’s reversal of that accusation 49 years ago with Nostra Aetate (Vatican II), the phrase “Christ killer” continues to resound throughout Orthodox Christianity and many Protestant denominations. Islam, somewhere within its founding years, seems to have had a run in with a Jewish tribe in Mecca, who Muslims say pulled a flip-flop on Mohammed and went with his enemies in Mecca. So now ALL Jews are traitors to Islam. No evidence of this event exists, but Muslim word of mouth needs no evidence. Jewish people have a word for this type of tale … libel.

Actually, Jewish people seem to always be between a rock and a hard place throughout history as a minority, having to take sides eventually with Christians or the Muslims, until the tide turns and they are on the new rulers’ hit list. For example, Muslims were in control of much of Spain for centuries and Jewish people were able to establish some kind of detente, although at a very big price, until the Roman Catholics decided to take Spain back. Well, there you have it … the Inquisitions – convert or die. And more than half the world is Christian and Muslim. Why couldn’t Jews be hated by lesser cultures like Laplanders and Arubans?

If the historical and/or religious grievances weren’t enough to want Jews gone from the earth, the Russians came up with a neat idea that was useful to Christians, Muslims, and Mr. Shicklegruber … solid evidence that Jews were plotting and planning to TAKE OVER THE WORLD. Yah, that’s the ticket! That’s right … the Russians plagiarized (are we surprised?) a book to fabricate the answer to every anti-Semite’s prayers. The Protocols of the Learned Elders of Zion (Protocols), which, from what people tell me, few if any, including many Jews, have ever heard of, but hundreds of millions of copies of this book can be found all throughout the Middle East, European and Roman Catholic countries, Japan, and probably every nook and cranny of the four corners of this globe … and its libels seems never to leave the lips of billions of people on this planet, people not even aware of their false origins. Throw in petrodollars, and the ability to use them to buy off politicians and media organizations, and you might wonder why any of the surviving 14 million Jewish people will make it for much longer.

Some people say this isn’t about Jews and Arabs, it’s actually a proxy conflict between a “liberal democracy”/Judeo -Christian values culture vs a fundamentalist theology /caliphate (that’s not califragilistic)/ Sharia law/ world domination culture. Over the last 45 or so years i the Arab-Israeli conflict has scaled down to the Palestinian-Israeli conflict and further scaled down into the Hamas-Israeli conflict, as a demonstration that smaller is better, where a terrorist organization whose publicly stated goal is killing every Jew on the planet is enabled and/or supported by a disgusting number of people who live in every country.

Can it be that they despise Jews so much that they would prefer to support the terrorist organization whose ultimate aim is actually to promote Sharia law and their caliphate? Do they hate Jews enough to sacrifice themselves? Let’s not forget the other half, comprised mostly of people living in India and China. What’s their beef with the Jews? Although India is the largest democracy in the world, one billion people in India are polytheists and another 250 million are Muslim, and the Communist Party that runs China isn’t too fond of the democratic ideals that are at the heart of the culture in Israel. This isn’t a very encouraging picture for God’s chosen people, is it?

There’s an old racist “joke”, (that is, it’s funny to a racist) about a black man arrested by a Texas sheriff for the crime of being black. The sheriff said, “Boy, I’m gonna give you a fair chance to go free. I’m gonna bury you up to your neck, and if the coyotes don’t get ya’ tonight, I’ll let you go in the mornin’.” In the morning, the sheriff was surprised to find his “prisoner” still alive, holding onto the screaming coyote’s genitalia by his teeth. The sheriff kicked the black man in the head and said, “Fight fair, n——-r.” Jews have seen this movie for several thousand years. Now, in the 21st century, the European Union and United Nations are the sheriff who has buried Jews up to their necks in anti-Semitism for the coyotes of the Middle East and Africa. But the Jews are still … well, you get the metaphor, don’t you?

So you wanna know why anti-Semitism is exploding, do you? Well, let’s summarize. The root causes include the vestiges of historical Christian anti-Semitism, a Muslim religion hijacked by fundamentalist Muslims who have found the perfect foil for their campaign of global dominance, and the libels contained in and spawned by the Protocols of the Elders of Zion. Even if the enemies of Jews acknowledged that Jews are an incredibly tiny portion of the world population, less than 2/10 of 1%, or .002 for those who are fractionally challenged, (I know, some will say “How can that be? Jews have done so much and are into practically everything.), they would still say, “Okay, so there aren’t really enough Jews to take over the world, but they are still the puppeteers and ventriloquists of the world.”

And finally, the real reason is that too few Christians know or care that the Roman Catholic Church judged the Jews “NOT GUILTY of the “Christ killer” charge; too few people know or care that 20 years ago a Russian court ruled the Protocols false; too few people can function without oil; too few people know or care that the modern day Middle East was constructed by the British and French who defeated the Arab allies of Germany in WWI; and too few Jews and Jewish organizations and institutions actively defend their heritage at a time of crisis. In other words, as Edmund Burke said, “All that is necessary for evil to triumph is for good men to do nothing.” Anti-Semitism is and always was genocidal. The world always waits too long to confront evil.

About the Author
Ron Dolinsky
Comments