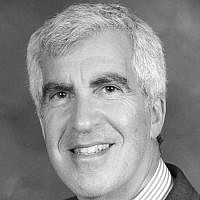 The Blogs
Jonathan Franklin
Apply for a Blog
Advertisement
Please note that the posts on The Blogs are contributed by third parties. The opinions, facts and any media content in them are presented solely by the authors, and neither The Times of Israel nor its partners assume any responsibility for them. Please contact us in case of abuse. In case of abuse,
Report this post.

Each of the three Abrahamic religions, Judaism, Christianity and Islam, claim that there is just one omnipotent God, but is it the same god? How could the same god reveal the Five Books of Moses (“Torah”), the Gospels and the Koran which in many respects are antithetical to each other with completely different styles and interpretations? Each Abrahamic religion worships a god as manifested in its Holy Scriptures or Canon which are traditionally accepted to be divine revelations.  I would therefore posit that the Abrahamic religions, as a group, should resemble Monolatry defined as “the worship of one God without denial of the existence of other gods” not Monotheism. The Jewish God is Yahweh, the God of Israel, the Christian God is the Trinity (Father, Son and the Holy Ghost) and the God of Islam is Allah, with Mohammad as his Messenger. Attempting to tie these together as one and the same God is faux monotheism.

Consider this as well: Each of the Abrahamic religions requires a convert to pass a rite of passage before the convert will be accepted into their midst. In Judaism’s case, circumcision for males and the immersion in a Mikvah for women is required, for Christians it is baptism and for Muslims it is reciting the Shahada, “There is no true god (deity) but God (Allah), and Muhammad is the Messenger (Prophet) of God”).  Wouldn’t just one identical rite of passage suffice if all three religions are worshipping the same God?

If we believe our scriptures are revelations from the same God, then it means that where they contradict either by text or in interpretation the subsequent revelations must take precedence over the preceding ones. Under this logic, Judaism calls itself the “Chosen People” because it claims the first covenant with God, Christianity replaced the Jewish covenant with a New Testament or Covenant and Mohammad’s message is the inerrant prophecy because Islam considers the Koran the final revelation of God.

The concept of one revelation replacing another (i.e., a continuum of revelations from the same God or one True revelation) under a Monotheistic conception has led to unspeakable intolerance and persecution between the Abrahamic religions. Interfaith discussion tries to paper over these differences, but to my mind it would be more honest to say we perceive God through our respective Holy Scriptures which need to be interpreted so that each religion does not encroach on the other’s chosen path to their God.

Under Monolatry no religion admits to possessing the Truth, but rather each one is seeking truth to understanding and define its relationship with God. The God we are seeking is the one we perceive through our Holy Scriptures. While many of the laws and values between the scriptures may overlap, where any text denigrates or threatens followers of another religion (e.g., unbelievers in Christ will go to Hell) should be rejected or reinterpreted since it would be inconsistent with Monolatry (which does not deny the existence of other gods). Instead, we should emphasize our common values and moderate our differences that could lead to harm or injury between us (i.e., Ethical Monolatry).

Possibly, the greatest beneficiary of Ethical Monolatry is Judaism because, by being the first revelation, it would no longer be condemned to having to justify itself against the subsequent revelations of Christianity and Islam which claim to replace or supersede it. Obviously, if the same God fundamentally changed His message, then that means Judaism’s Bible becomes errant and Jews can no longer consider themselves the Chosen People or a Priestly Nation. I am not going to use this space to expound on Jewish persecution but let it be said that replacement theology has played a large role.

It’s worth mentioning that Monolatry is not a new or radical idea. Among the ancient Israelites Monolatry was the norm, which was basically a stricter form of Henotheism (adherence of one particular god out of several). There are several examples in the Hebrew Bible that indicate the practice of Monolatry. Here are just two: 1) The first of the Ten Commandments “You shall have no other Gods besides Me” (Exodus 20:3)                           2) “Who is like You, Yahweh, among the gods? Who is like You, majestic in holiness, awesome in splendor, working wonders? “(Exodus 15:11). Both verses presume that there are other gods, but Yahweh is the only one you should worship.

The Rabbinic interpretation of Monotheism is that there is only one God for all peoples which is the God of the Hebrew Bible. Christianity unequivocally abrogated the Jews’ special covenant with their god while Islam claims it received the last and final revelation to replace the Torah and the Gospel which are considered to be adulterated.  Pointedly, some infamous passages in the Gospel and Koran demonize or criticize Jews which have fermented anti-Judaism or antisemitism.

To my mind true Monotheism is where we all worship One God who takes us for what we are without prejudice. The universal relationship with God cannot be based on religious dogma which fuel hatred or resentment towards those who don’t follow a certain creed. Rather it should be based on shared universal values for the betterment of humankind unencumbered by different perceptions of God through Holy Scriptures.

Such a theological concept for universal morality has actually been proffered by Judaism with the seven Noahide Laws derived from the Talmud’s interpretation of Genesis 2:16 given to Adam and Genesis 9:4-6 given to Noah which are as follows:

In the meantime, let us aspire to Ethical Monolatry!

About the Author
Emigrated to the United States from England in 1979. Graduated from New York University in 1981 with a BS in Business Administration and qualified as a Certified Public Accountant in 1984. Had a Letter to the Editor published in Commentary Magazine, New York Times and The Jewish Week. Former Treasurer and President of Hillels of Westchester. Assisted Jewish students composing articles in college newspapers defending Israel. Actively involved in interfaith work. Currently employed as a Director of Supply Chain for a major consumer products company.
Related Topics
Related Posts