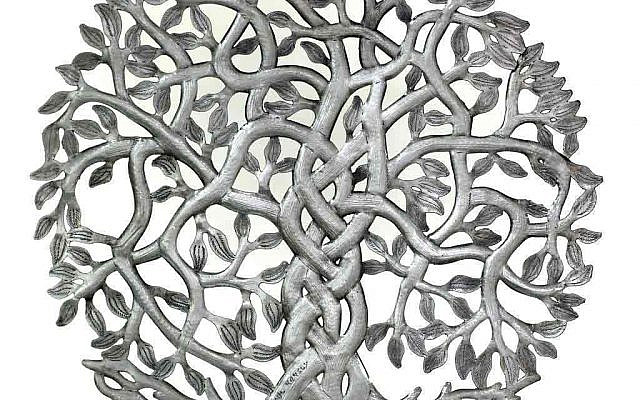 Let us recall that, according to our tradition, Adam and Eve were prohibited from eating from the Tree of Knowledge only for three hours. Adam and Eve were created on the sixth day—the Eve of the Sabbath (Erev Shabbat). With the arrival of sunset that brought the first Shabbat since creation, eating the forbidden fruit would have become permissible.[2] This interesting detail holds the answers to our questions.

A key difference between Newtonian (classical) and quantum mechanics is that in Newtonian mechanics, the observer is passive and does not affect reality, whereas in quantum mechanics the observer, through the act of observation, collapses the wave function and fixes the reality in one out of many possible states. For this reason, in quantum mechanics, observers are called, in the words of John Archibald Wheeler, “participating observers.” As we said above, the Tree of Knowledge is a metaphor for the collapse of the wave function. Adam and Eve were allowed to passively observe the Tree of Knowledge and admire its goodly fruits, but they were not allowed to eat from it. The act of eating made them active participants, or “participating observers.”

By eating the forbidden fruit of the Tree of Knowledge, Adam and Eve collapsed the wave function and fixed the world in a single state—the inferior state.

As we recall from the narrative in Genesis of God planting the Garden of Eden, He first planted the Tree of Life:

…the tree of life also in the midst of the garden, and the tree of the knowledge of good and evil. (Genesis 2:9)

As noted earlier, the Tree of Life is a metaphor for the wave function, which, until it is collapsed, represents the superposition of all possible states of reality. The story of creation talks about two states—the state of six days of creation and the state of the seventh day—Shabbat—when God rested from His work. The six days represent the mundane, the unrectified and unredeemed spiritual state of the world, whereas the Shabbat represents the holy state when all worlds—physical and spiritual—attain elevation into an exalted state of perfection, where reality is redeemed and rectified. This is the state of messianic redemption. This is why messianic time is called in Hebrew “yom shekuloi Shabbat”—continuous Shabbat.

Unfortunately, that was not to be. The catastrophic consequence of eating the forbidden fruit prematurely fixed the world in its inferior, unrectified state and delayed messianic redemption for almost six thousand years—and counting.

This mistake of cosmic proportions thus warranted the severe punishment God meted out to Adam and Eve. In fact, it wasn’t a punishment, but rather a direct and unavoidable consequence of their action—they could have lived, immortals in Paradise, but by fixing the world in its unrectified, mundane state, they lost the chance at immortality.

Therefore the Lord God sent him forth from the garden of Eden, to till the ground from whence he was taken. (Genesis 3:23)

Although on the literal level the verse speaks of the expulsion of Adam and Eve from the Garden of Eden, in reality, by fixing the world in its inferior mundane state, they forfeited citizenship in Paradise. The place where Adam and Eve lived ceased to be Paradise. After all, Paradise was defined by the presence of Shechinah—the Divine presence. As explained in the discourse Bosi LeGani by Rabbi Yosef Yitzchak Schneerson (the Rebbe Rayatz—the sixth Rebbe of Chabad-Lubavitch), the Shechinah left the Garden of Eden after the primordial sin and flew to the first heaven (the first spiritual level above the physical level of the created universe). Without the Divine Presence, the Garden of Eden ceased to be the Paradise it was.

[1] Our five-year-old granddaughter, Sophy, upon hearing the story of the primordial sin and its ending with God punishing Adam with mortality, innocently asked, “Don’t you think Hashem maybe overreacted?”

[2] The Pirush HaShach on the Torah (Kedoshim). See Likkutei Sichos, vol. 36, p. 75 (see footnote 56). See Ohr HaChaim, which notes that had Adam only waited three hours, he would have made kiddush on the wine from the Pri Eitz HaDa’at (this, of course, is based on the opinion that the forbidden fruit came from a grapevine). Chasam Sofer also writes that on Shabbat, the fruit of the Tree of Knowledge would have become permissible to Adam and Eve.