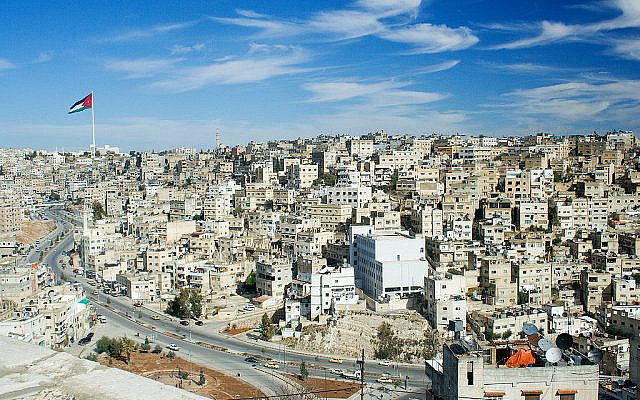 A view of eastern Amman from Jabal al-Qal'a (Jewish News)

For 18 years after the 1949 Armistice, the Arab inhabitants of the West Bank salient thrived as citizens of the Hashemite Kingdom of Jordan. No less so did the so-called refugees, inflated in number out of all proportion to the actual total of self-exiles by fraudulent UN relief claimants who had little connection with the lands that became Israel.

Most would doubtless have continued to prosper under Hashemite rule had not the late King Hussein defied Israel’s warnings to stay out of the Six-Day War. For believing Nasser’s lies that the IDF was vanquished on day one he was promptly swatted out of Judea and Samaria.

Since that time there has been no moral case for Israel to withdraw to the ludicrously indefensible Green Line. The Jewish State was established by the will of the United Nations and warmongering rejectionism has underlined the legitimacy of Israel’s right to maintain permanent control of its destiny within properly secure borders. But that imperative will never shield Israel from international obloquy if it swallows up 30 percent of the occupied territories.

That it may claim to do so ‘bilaterally’ will satisfy few of Israel’s critics when the other party is the Trump administration.

Of course, it will be no work of genius to trace a contour around a more or less contiguous Arab residency commensurate with Israel’s strategic needs.

Yet whether or not based on the joint US–Israel mapping committee’s survey an enclave contained within a winding, tortuous, probably fractured and certainly controversial boundary line need not for all that be reduced to a Bantustan, as described by Professor David Harel in Jewish News earlier this month.

Nonetheless, it is hard to see such a diminished entity elevated from autonomy to a viable Palestinian state. Jordan’s King Abdulla II was wrong to recently insist on statehood as the only way forward.

The challenge and the solution lies in reinvigorating the Perez-Hussein accord of 1987, ceding the reduced West Bank rump to an enlarged Jordanian kingdom and building on the Israel/Jordan peace treaty brokered by Bill Clinton in 1994.

The King has implied that if Israel goes for unilateral annexation, Jordan might tear up the treaty but, in reality, he is likely to be amenable to endorsing territorial partition between Israel and Jordan.

For years, Greater Israel proponents rejoiced in the slogan ‘Jordan is Palestine’ (they meant Transjordan of course) and now they ought to quieten their irascible comparisons between Abdullah and his namesake grandfather.

At any rate, he would be best to ignore them. Partition can succeed, but there are two caveats.

First, it would mean the relatively sophisticated Arab population of the West Bank having to stomach becoming subjects of a Bedouin monarchy. It is inconceivable that the Hashemite Crown would ever voluntarily give up what was bestowed by the British after the First World War.

But a compromise might be palatable to the disdainfully Levantine West Bankers. Abdullah could narrow the ambit of his prerogative powers to become more of a truly constitutional monarch after the fashion of the native country of his beloved mother, the Suffolk-born Toni Gardiner.

Second, remembering the almost fatal threat posed to Jordan by the PLO in the late Sixties, Abdullah might understandably fear a repeat challenge within his own (enlarged) borders. But close co-operation with Israel would probably see off any insurgency.

There is no time to lose. Until November Donald Trump will enjoy the power to convert his ridiculed peace plan into something which really could work.