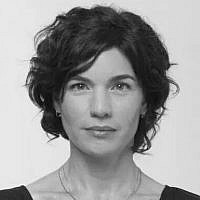 The Blogs
Tamar Zandberg
Apply for a Blog
Advertisement
Please note that the posts on The Blogs are contributed by third parties. The opinions, facts and any media content in them are presented solely by the authors, and neither The Times of Israel nor its partners assume any responsibility for them. Please contact us in case of abuse. In case of abuse,
Report this post.

We have reached a new level of absurdity. The Israeli left and everything connected with it are under a heavy and unprecedented attack led by the highest ranking politicians. Recently a new record of cynicism was broken as Prime Minister Benjamin Netanyahu hinted that there was a connection between terrorist attacks in Istanbul and the work of Breaking the Silence in Israel, and two government ministers marked Breaking the Silence staff members as no less than traitors. These instances, among others that have occurred in recent months serve as a frightening warning for all who believe that Israel’s character as both a Jewish and a democratic state is crucial for its continuation.

This trend has been going on for quite some time. Over the past two years, a vicious campaign has been waged against Breaking the Silence and other human rights organizations dealing with the Israeli-Palestinian conflict. Politicians, right-wing organizations like Im Tirtzu and regular Israeli citizens have taken to newspaper columns and social media outlets in a vicious campaign aimed at undermining the work of these organizations. The zenith of these efforts took shape in the controversial Shtulim (planted) campaign which received so much criticism that the CEO of Im Tirtzu suspended himself.

All these attacks raise the question, why is there so much hatred and fear of Breaking the Silence and the entire left? Right wingers, and unfortunately some left wingers as well, often claim that the Israeli left is weak and not effective. Why then is the right so anxious to weaken in even more? The only answer is that apparently we are not as weak as we may think. Our power lies in our morals and in the fact that our values and our vision are the only ones with potential to offer a hopeful future for our beloved Israel. Breaking the Silence, for example, is one of the few groups that hold up a mirror to the Israeli public, reflecting the immorality of almost 50 years of military occupation over the Palestinian people.

Since 2004, the organization has been monitoring Israel’s policies in the West Bank by publishing testimonials from discharged soldiers regarding their time in the IDF. These testimonies expose the many injustices that occur daily in the West Bank, many of which are a direct consequence of problematic policies and the government’s attitude towards the occupation. Breaking the Silence’s goal is to oppose the right-wing camp’s attempt to conceal the moral price of the Israeli occupation. It does this by raising awareness, and by encouraging Israelis to change the reality on the ground. The goal, it must be stressed, is not to undermine Israel, but rather to move it in the direction of a better and more just future.

Instead of listening to these voices, the government has been trying to silence them and claim that the organizations discussing the injustices in the West Bank are the problem, rather than the occupation itself. Instead of dealing with the crux of the matter, i.e. the Israeli-Palestinian conflict, these politicians slander Breaking the Silence’s work as bad PR for Israel, or worse, as a political threat. Aiming to increase their popularity among right-wing constituents, politicians have joined in on the attack by scapegoating Breaking the Silence in frightening ways.

However, the problem with the government’s tactic is that it backfires. When Breaking the Silence and other left-wing NGOs are attacked, it is not long before more centrist groups come under fire as well. This was proved in the recent case of a soldier in Hebron who shot a Palestinian assailant dead, though the attacker was incapacitated and no longer posed any threat to the people around him. When IDF Chief of General Staff Gadi Eizenkot and Minister of Defense Moshe Ya’alon (Likud) deemed that the case be examined in a military court – citing possible violations to the ethics of war – the two senior officials were labeled as sellouts attempting to appease the left. This case shows that those who shut their ears to criticism become radicalized to the point that they are willing to viciously attack even those in their own political camp.

Breaking the Silence is one of the few voices trying to change the reality in which we live. Their work aims to crack the notion that occupation has no moral consequences. Along with other NGOs and the left political camp, they call to end the occupation and work to achieve a political solution to the conflict. Maybe now, following a decade of right-wing governments that have brought neither security nor stability to the region, it is time to listen to the left.

As Passover is being celebrated I think about one of the main obligations of the seder. Vehigadeta Lebincha – and you shall tell your child. At Passover we are commanded to tell the story, our story, of redemption. We must remind ourselves that we were slaves in Egypt and that salvation, justice and freedom are possible. Yet, we also remember the poor and those still in bondage today. This Passover, let us address our communities, and discuss the injustices occurring in our name in the West Bank, so we can move ahead toward a more just future.

Tamar Zandberg is a member of Knesset in the Meretz party.

About the Author
Tamar Zandberg is a member of Knesset in the Meretz party.
Comments