The Blogs
Reuven Spolter
Founder, Kitah
Apply for a Blog
Advertisement
Please note that the posts on The Blogs are contributed by third parties. The opinions, facts and any media content in them are presented solely by the authors, and neither The Times of Israel nor its partners assume any responsibility for them. Please contact us in case of abuse. In case of abuse,
Report this post. 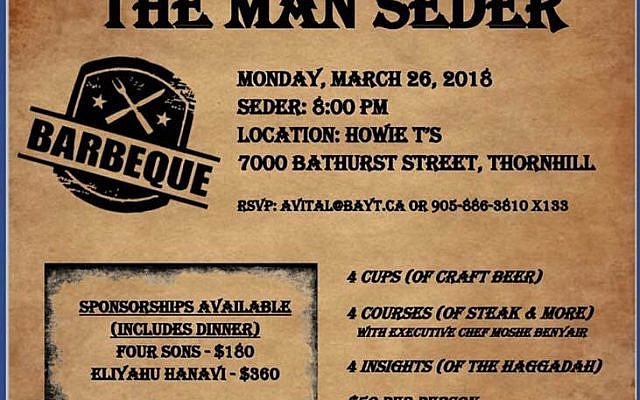 Publicizing the Man Seder in Thornhill, Ontario. (via Facebook)

In a recent post about Man Seders, Sarah Morrissey raises a number of interesting questions about their place in the larger structure of Orthodox synagogue programming, and her discomfort with the idea of the program and the stereotypes that she feels it promotes.

There’s some irony here: we created the Man’s Seder directly in response to the Federation Communal Women’s Seder that my wife attended in Metro Detroit. The local Federation had organized a communal meal (including a lot of chocolate) for women only, which included teaching and learning elements as preparation for the seder. I wondered why the community was offering educational programming for only the women, while the first time the men gave educational consideration to the seder, as is all too often, would be when they sat down on Passover eve.

To meet that need, the Man’s Seder was born.

In many families, the “technical” leaders of the seder — the person who recites the kiddush, leads the reading of the Haggadah, and breaks the matzah — is the father (or grandfather). I would hope everyone could agree that leading a seder should include more than rituals. Rather, the seder can and must be an educational experience for everyone at the table. The idea of the Man’s Seder is to create an event that will simply be attractive to the men who will be leading their family seder, giving them good ideas for discussion, study, and reflection with their families.

Why beer (or booze) and steaks? Generally, the success and popularity of the program is a good indicator of why they were chosen: while it may be stereotypical, men generally like beer and steak. If we ran a Woman’s Seder, would we think to do it with beer and steak? Would it be successful?

Most shuls that run the Man’s Seder offer a wide range of programs, exactly as Sarah Morrissey describes in her article: they take great pains not to exclude women from educational programming, but to convey that women’s inclusion is crucial to a successful synagogue. The Man’s Seder then is just one program in a wide range of other programs.

I would have absolutely no issue with a pre-Pesach women’s only seder. We can serve whatever you like — beer and booze, or maybe salmon and white wine. If that would bring women together to study and educationally prepare for the seder, all the better.

I wonder though: Does a “think-piece” like Morrissey’s, questioning the values of the Man Seder, stem from the desire for meaningful programs for women in the Orthodox world? Or does it come from a discomfort with the very notion that men and women have different needs, often like different things, and that many men really do like beer and steak? Instead of creating more programming to appeal to women, articles like this one apparently prefer to question successful programs because they give the author a sense of unease and discomfort.

Rather than trying to tear down successful programs because they make Morrissey uncomfortable, perhaps it would be better to create an alternative program: maybe a couples pre-seder event; a women’s-only seder that wasn’t about cooking. Rather than decrying great programming for men, would the community not be better served by advocating great, meaningful programming that appeals to women, and conveys the message that you should perhaps clean a bit less, and study a bit more in preparation for the seder?

Inclusiveness doesn’t mean always using one mold for everyone. It means creating meaningful programming for each constituency, according to its needs and preferences. Hopefully, next year, we’ll not only see a bunch of Facebook posts about Man Seders; rather, we’ll also see flyers for Woman Seders that insist that women can and must take an active educational role at the seder, and the best way to do that goes beyond grinding the matzah and cooking matzah ball soup (which men can do as well), but preparing thoughtful ideas to share throughout the seder.

About the Author
Rabbi Reuven Spolter is the founder and director of Kitah (www.kitah.org), a new online Jewish learning plaform bringing Jewish learning to Jewish schools and Jewish homeschooling families around the world. He is also the founder of the Mishnah Project (mishnah.co), an online flipped-classroom learning initiative focusing on using the power of visual learning to bring the Mishnah Yomit program to a global audience. He has served as community rabbi and taught formally and online for over two decades. He has taught and lectured to groups of all ages in communities around the world.
Related Topics
Related Posts
Reuven Spolter
Comments