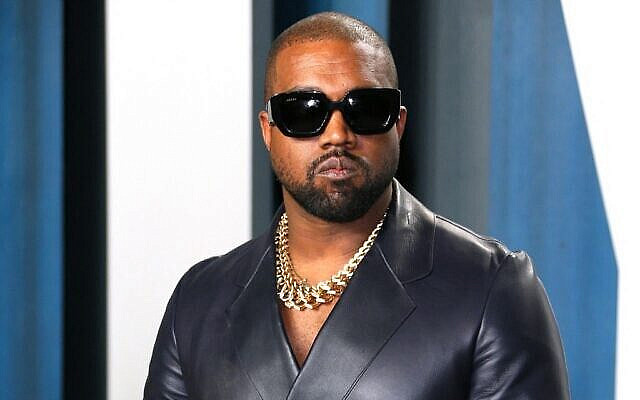 February 9, 2020 Kanye West attends the 2020 Vanity Fair Oscar Party following the 92nd annual Oscars at The Wallis Annenberg Center for the Performing Arts in Beverly Hills. - Instagram and Twitter said they have restricted the accounts of US rapper Kanye West over posts slammed as antisemitic. A spokeswoman for Twitter told AFP on October 9, 2022 that West's account was locked due to a violation of the social media platform's policies. (Photo by Jean-Baptiste Lacroix / AFP)

The obsessive outbursts of antisemitism from the internationally known artist Ye, formerly known as Kanye West, have led some individuals to argue that all he is looking for is attention, and therefore we should ignore his absurdity.

Unfortunately, there are too many factors at work which make such a strategy far-fetched. His outreach is huge, with 31+ million followers on Twitter alone. His willingness to engage in blatant antisemitism encourages extremists to act, as we saw this past weekend with a banner in Los Angeles praising Ye and a statement by the vile Goyim Defense League. And it demonstrates the need to call attention and to educate about the particularly pernicious element of hatred embodied in classic antisemitism and reflected in how exactly Ye attacked the Jewish people.

In this regard, what stands out about this whole brouhaha was the way Ye chose to express himself. He didn’t say that Jews aren’t nice people or even that that they are responsible for the death of Christ. What he reverted to was that unique element of antisemitism that distinguishes it from other forms of prejudice and, particularly over the last century and more, has become the source of catastrophic danger to the Jewish people. That is the conspiratorial notion of overwhelming and poisonous Jewish power that allegedly brings great harm to its targets and victims.

In Ye’s case, he claims that Jews act in a cabal to control the music industry, causing great harm to himself and presumably others all to serve Jewish power. And the correct response to all this is to threaten them — “death con 3 on Jewish people.”

In a world where stereotypes, discrimination, and micro-aggressions against a variety of minority groups are very much still with us, the idea of evil Jewish power is the most dangerous of all. Expressed in different ways over the years, it has been the justification of violence, murders and genocide against the Jewish people.

After all, if the Jews have so much power and if they are using it to harm society, then (so the warped logic goes) we have a responsibility to stand up against it for the benefit of all and do what we can to contain if not eliminate such power.

Ye’s way of expressing himself fits into the historical pattern of the main attacks against Jews going back at least to the beginning of the 20th century, when the infamous fraudulent document, the Protocols of the Learned Elders of Zion, supposedly the secret plans of Jews to take over the world, first appeared in Russia. Its use to justify mass assaults on Jews, whether in the Russian civil war after the Communist revolution or in Nazi Germany by Goebbels and his minions, is legendary.

What is striking, however, in listening to Ye, is how his remarks not only mirror classic European antisemitic themes but as well those of probably the four most famous antisemites in American history. Henry Ford, the industrial magnate, used his platform to disseminate the Protocols in the 1920s through his newspaper The Dearborn Independent. He brought the idea of Jewish aspirations to dominate the world to the American public.

Some years later, in the 1930s, Father Charles Coughlin, known as “the radio priest,” espoused the theme of evil Jewish power every Sunday night to audiences of millions of Americans.

Charles Lindbergh, the American aviator hero, and leader of the America First movement opposing American entry into World War II, gave a speech in Des Moines Iowa in 1940 claiming that the only people who were trying to drag America into the war were the all-powerful Jews.

And Louis Farrakhan, the longtime leader of the Nation of Islam and the current antisemite with one of the largest followings, repeatedly refers to evil Jewish control of a multitude of elements in American and African-American society.

So yes, it is important that Ye is being treated as a pariah by many in the corporate world, most recently by Adidas. This controversy, however, should remind us, at a time when antisemitic incidents are at a high in America and where there is a particular vulnerability to conspiracy theories, that the ultimate conspiracy theory of Jewish evil power lurks around the corner and needs attention by educators and leaders before it finds a new life.