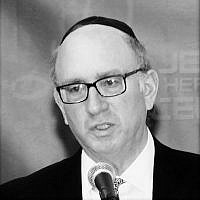 The Blogs
Naftali Portnoy
Apply for a Blog
Please note that the posts on The Blogs are contributed by third parties. The opinions, facts and any media content in them are presented solely by the authors, and neither The Times of Israel nor its partners assume any responsibility for them. Please contact us in case of abuse. In case of abuse,
Report this post.

There was a lot of debate in our offices when Ari approached us to participate in the Netflix documentary One of Us, that was to document his painful journey leaving the Hasidic community. For weeks, the internal discussion continued as we weighed the pros and cons of allowing us to be filmed as part of the documentary. After Netflix came down to speak with us, we consulted and received numerous outside opinions as well. Ultimately, our fear of being parsed to soundbites, failing to convey properly and positively our perspective by directors whose motives and potential agenda was unclear, won out. The end result was, as we feared, a painful look at the underbelly of these horrific issues within the Hasidic community. The stories are largely true, and the pain is real, and, most importantly, it shines a spotlight on something that urgently needs addressing. However, the narrative has been lost to Netflix, with its secular dogma, and we must reclaim this narrative because if we don’t, it becomes a story of us vs. them not a story of ones of us.

We do not gain anything by highlighting or debating the possible motives of the producers and those involved. It is even inconsequential if the details of these three specific individuals are completely accurate or misunderstood for the purposes of this film. The unfortunate reality is that there are thousands of innocent people who are struggling with acute pain and deep suffering similar to the narratives depicted in One of Us. Yes, the Hasidic community is predominately comprised of healthy and happy individuals with the noblest of aspirations and values. We don’t need to spend our energies defending the good; the good speaks for itself. We need, however, to do much more to identify and address the pain and struggles among our youth.

In 2013, 10 Hasidic boys and girls, running away from Yom Kippur, showed up (in an incredible demonstration of Divine Providence) at the very same New Jersey hotel at which our organization was hosting our Yom Kippur services. This thrust us into a world that at the time we knew very little of. As we got to know these precious youth, and subsequently hundreds of their friends, we were struck by the glaring lack of resources within the Hasidic community for those disenfranchised. As a clear issue of hatzalas nefoshos (saving lives), our Jewish Outreach organization jumped into, and invested heavily in, a new and critical area of work.

It was Rabbi Ozer Babad, the director of our, then-newly-formed Hasidic division, who introduced me to Ari. We experienced so many of his ups and downs together. We have celebrated together and we have cried together. With Ari, and with all our kids, our first priority was, and has to be, saving their lives and getting them to a safe place, where they are not harmed by others and not harming themselves, through drugs, alcohol and other hazards. [To meet that need of a safe environment, a state-off-the-art drop-in center (meals, gym, lounge, classrooms, music, counseling etc) has since been built in the heart of Boro Park.] Next, we help them find stability by providing them with education and/or job placement. Only then can they successfully rebuild their connections to, and appreciation of, Judaism Watching the film brought back many painful emotions, yet I also felt a strong sense of pride for Ari, seeing how much strength and courage he demonstrated, to the extent that he has pieced his life together and overcome so many hurdles.

It’s heartbreaking that so many of our children feel there is no place for them within the community. This is a community with so much hesed (acts of kindness), and entire organizations dedicated to hesed, yet there aren’t many resources for the disenfranchised. Even a small percent of such a huge community is too many to bear. Admitting and addressing the problems of the community from within will ultimately be so much less painful and more successful than leaving our children with no one to turn to other organizations which do not share our values and agendas. Let’s mobilize our strengths and resources to reach out with love to our children who are in pain. Each of them are One of Us.

About the Author
Rabbi Naftali Portnoy is the director of the Jewish Heritage Center, one of the premier Jewish Outreach organizations in the United States. Since 2014, the Jewish Heritage Center has run a drop-in center called 1225 in Boro Park as part of their Chassidic Youth division. The author can be reached at nportnoy@thejhc.org
Related Topics
Related Posts
Comments
Advertisement