By the end of the 18th century, the Palace of Versailles was no longer home to France’s greatest thinkers. These had migrated to Paris where they attended the city’s salons. French salons were never as ostentatious as those of Versailles, nor as rigid and overburdened with a ceremony. The salons were simple parlor gatherings hosted by sophisticated women for the advancement of knowledge. Thought could roam freely in the salons. Ideas could be tested and new visions could be breathed to life. It is thus not surprising that the Encyclopédie was first conceived of in the salons of 1745.

The Encyclopédie was a collaborative endeavor meant to conquer ignorance. Its editor, Denis Diderot, intended to author the world’s most extensive catalog of human knowledge, covering diverse fields such as religion, medicine, government, and the arts. Soon, a community of writers, or Encyclopédistes, gathered to undertake the monumental task set forth by the editor. While the Encyclopédistes worked to catalog human knowledge, their goal was to advance scientific thought, promote tolerance, reform government, free knowledge from the tyranny of religion, and be true to the spirit of Enlightenment. Published in France between 1751 and 1772, the Encyclopédie has been credited with instigating an intellectual revolution in Europe and stoking the fervor of the French Revolution. It was also the very manifestation of Kant’s later definition of Enlightenment as “man’s emergence from his self-incurred immaturity”. Yet for all its scientific splendor, the Encyclopédie is now but a time capsule, a still portrait of eighteenth-century European society. As such, it is the exact opposite of Wikipedia.

Wikipedia is now considered to be the most extensive encyclopedia in human history. Unlike Diderot’s project, Wikipedia is a living, breathing encyclopedia; one which adds dozens of new entries daily dealing with nuclear fusion, human-computer interactions and in-depth analyses of WandaVision episodes. While the majority of Wikipedia entries are written in English, as the table below demonstrates, there are also millions of articles in other languages including German, Spanish, Portuguese, Polish and Chinese.

Diplomats don’t usually include Wikipedia in their definition of digital diplomacy. Yet in this post, I argue that this is a grave mistake. Studies indicate that Wikipedia is viewed by digital publics as a trusted source of information. Moreover, when searching for information online, digital publics usually encounter Wikipedia entries as these top the search results of Google, Bing and other search engines. Importantly, while Wikipedia offers many advantages, including the democratization of knowledge and free access to knowledge, it also suffers from a main limitation. Wikipedia rests on the ‘wisdom of the masses’. Editors throughout the world review Wikipedia entries and correct mistakes or inaccuracies on a daily basis. Yet studies show that while Wikipedia offers accurate information in popular entries such as The Dick Van Dyke Show, less popular articles are rife with mistakes as few editors review them. Even more problematic is the fact that Wikipedia pages in non-English languages tend to be quite inaccurate as they are reviewed by smaller numbers of editors. This limitation is best explained in the video below titled ‘Professor Wikipedia’.

The Little Camp That Could

The challenge of Wikipedia was made evident last year when it was discovered that a Polish-language entry focused on a Nazi concentration camp built in the heart of Warsaw. According to Wikipedia, this was the only death camp used by the Nazis to systematically exterminate Polish citizens using gas chambers. The Wikipedia entry soon gained popularity in Poland, a country obsessed with distancing itself from the atrocities of the Nazis. The place where the Nazi camp stood has seen frequent demonstrations by Polish nationalists as well as a plaque that officially commemorates all those who perished in the camp.

There is only one problem. The camp never existed. The Wikipedia entry was a fabrication from start to finish yet it endured online for 15 years as it was written in Polish.

Rather than rely on the wisdom of the masses, the entry’s authors relied on the ignorance of the masses and a small number of Wikipedia editors in Poland. Although it was ultimately removed, the Wikipedia entry had a profound impact on Pole’s worldviews and sense of history. The entry even led to offline actions- the site of the alleged camp became a sacred ground for those looking to distance Poland from the Third Reich.

This example demonstrates the power of Wikipedia and the ability of non-English entries to warp people’s perceptions and understanding of reality. It is thus incumbent on diplomats to treat Wikipedia-based disinformation with the same zeal that they address disinformation on Facebook and Twitter.

Professor Jay Wang of the USC Center on Public Diplomacy has argued that diplomats must understand people’s knowledge voyage, or the online sites through which people learn about the world and events shaping it. For instance, it is possible that many people learn about the Crimean Crisis, or the Syrian Civil War, through Wikipedia. Possible disinformation in non-English articles can have an immense impact on a nation’s ability to advance its foreign policy goals. If a Chinese Wikipedia entry determines that Crimea has always been part of Russia, then Chinese netizens may accept Crimea’s annexation by Russia. And if Polish Wikipedia entries determine that Russia has ended the Syrian Civil War, Polish publics may oppose national efforts to oust Syria’s President Bashar Assad.

The table below records the number of Wikipedia users who have read the article on Crimea over the past 90 days (source: pageviews.toolforge.org). As can be seen, tens of thousands of users have learned about Crimea from non-English entries including those authored in Russian, German, French and Polish. As these articles are less likely to be reviewed by Wikipedia editors, they may be riddled with inaccuracies, falsities and lies. 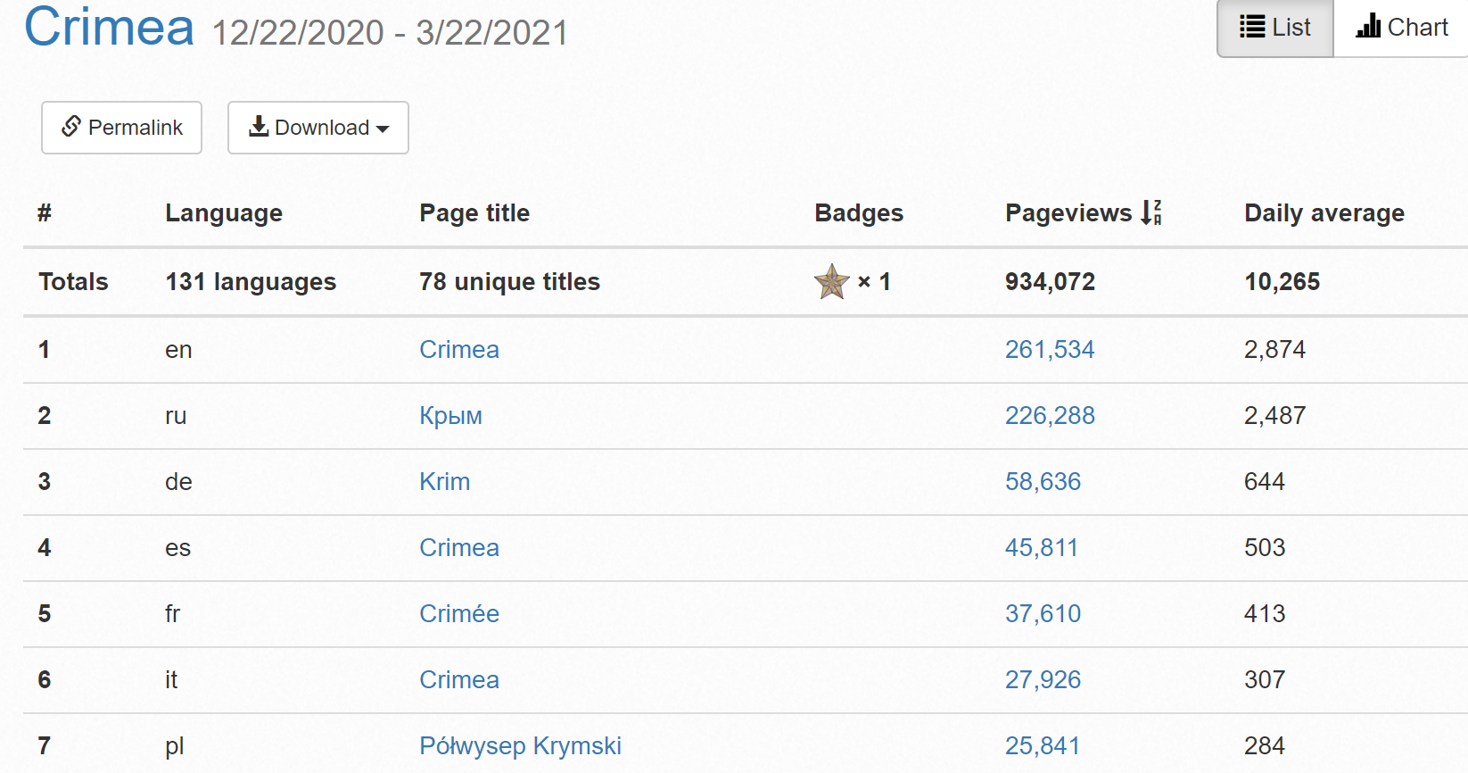 Diplomats must thus focus part of their digital efforts on ensuring the reliability of information found in non-English Wikipedia entries. The Portuguese MFA, for instance, should examine Wikipedia entries in Portuguese that deal with important policy issues including the future of the EU, human rights’ violations in Russia and even the causes and effects of climate change.

The Limits of Digital Diplomacy

Wikipedia is a central component of digital publics’ knowledge voyage and as such it must garner the attention of digital diplomats.