While much attention has been paid lately to the upcoming US Presidential contest, primaries are warming up for next year’s French Presidential election. Les Republicans will be holding their first round primary election on November 20th. Former Premier Alain Juppé has a strong double-digit lead over former President Nicolas Sarkozy, and looks poised to win the second round, which will earn him the nomination. The first round of the presidential election will be held April 23rd, with the runoff round on May 7th. Much can change between now and then, but Juppé has a strong chance of winning.

In 1995 Alain Juppé came to office as Premier under then President Jacques Chirac. His pension plan was so controversial it led to massive 1968-like strikes and protests. By 1997 the Socialiste Party led by Lionel Jospin would assume control of the National Assembly and oust Juppé and his government. As if this were not enough to dampen his political ambitions, he was later convicted of a campaign finance crime for an incident in the 1980’s; he was widely seen to be taking the fall for Chirac. How is this man now looked upon by many as the savior of France?

The past 18 months have seen a wave of terrorist attacks that have killed hundreds. Many French voters have become convinced that their mainstream political leaders can do little to protect them. Incumbent President Francois Hollande has done little to change this perception. His emergency measures have failed to prevent attacks or stem the tide of refugees from Syria, among whom are a small but deadly number of terrorists. Chained the leftist doctrines of multiculturalism and political correctness, the Socialiste Party and its leaders, like Hollande, seem ill equipped to address the concerns of French voters.

To make matters worse, the French economy is in very poor condition: unemployment is high, growth is waning, and the economy is stagnant. Voters look keen to restore the French right to power in the next election.

Many voters are looking to France’s far right party France Nacional (FN) for improvement to their conditions. FN is a Euroskeptic party (opposed to the European Union) and is known for being anti-immigration. FN and many on the right are willing to blame Islam more broadly (if not as a whole) for their security problems, rather than the small number of militants who actually perpetrate attacks. It is popular to portray immigrant populations and minorities as representing an attack on French culture.

FN has a history of promoting such radical views. Founder Jean-Marie Le Pen made many unfortunate statements in his time leading to a conviction under French law for inciting race hatred; for a recent anti-Semitic remark he was cast out of the party altogether by his own daughter and successor Marine Le Pen. Marine’s leadership has seen FN move away from its history of incendiary language to a more mainstream position. Together with the recent terror attacks and broader security concerns, Marine Le Pen is polling close to 30% in the first round of the Presidential election which should easily see her among the top two candidates proceeding to the runoff.

In the 2007 elections Nicolas Sarkozy came to lead the then UMP pulling the party rightward to attract FN voters. He succeeded in advancing to the runoff and won with a wide margin. Sarkozy served as President for five years until 2012. His term in office proved controversial and uninspiring, which is precisely how one might have described Juppé just a few years ago.Sarkozy has also been the subject of a campaign finance scandal, in which his own wrong doing was well established. Alain Juppé has somehow managed to upstage Sarkozy who was looking to return. Francois Hollande easily bested Sarkozy in the 2012 runoff election. Sarkozy has continued his rightward movement calling for the full acculturation of immigrants and a ban on the “burkini,” in an effort to court FN voters.

Alain Juppé, meanwhile, has been promoting the idea of a “happy culture.” He has made it clear that France can restore security without radical steps and he espouses confidence in an economic recovery. He speaks of a unified France wherein all of France’s population can live in security and prosperity. This positive vision in the midst of so much negativity is drawing large numbers of supporters to Juppé’s banner. This is a strange phenomenon in a society renown for its cynicism. Juppé’s rhetoric almost waxes Reaganesque, one wonders if this is the French or American Presidency that is contested? With Sarkozy increasingly trying to energize the right-most voters in Les Republicans, Juppé’s positive approach is refreshing. 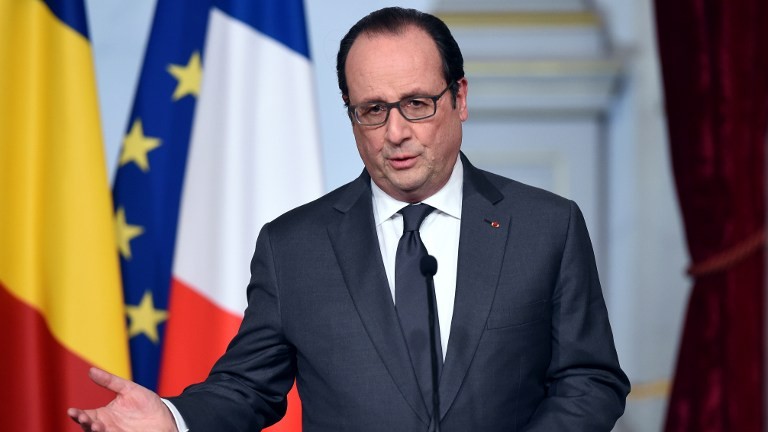 Current polls of the election itself, again many months out from the election and ahead of any direct campaigning for the office, offer a bleak picture for incumbent President Francois Hollande. To his left is Jean-Luc Mélenchon whose Left Party has gained considerable popularity in opposition to Hollande’s policies. In some recent polls, Mélenchon is polling close to Hollande, and could come in ahead. Marine Le Pen of FN, is out in front having garnered nearly 30% of the vote, but falls sharply in runoff elections, wherein most other candidates go on to win the presidency. It is most likely that the real contest in the first round will be to decide who advances to face Le Pen in the runoff? So far, either Sarkozy or Juppé of Les Republicans hold a strong second place showing, although the latter candidate is much stronger and much more likely to proceed to the runoff round. Both of these men poll well ahead of Le Pen should they face off in the runoff. In perhaps a disturbing turn for France’s left wing, the only candidate Le Pen seems to be able to defeat is President Francois Hollande. The prospects for his reelection are bleak. In all likelihood, Les Republicans will resume the Presidency next summer.

Much like Papa Joffre, the WWI General who came to symbolize the unified French struggle against Germany, Alain Juppé is a shaping up as a unifying figure. With the calm demeanor of an elder statesman and a positive grandfatherly attitude, he is quickly winning the hearts and minds of French voters. Far from the more divisive rhetoric of Sarkozy or Le Pen, Juppé offers a unifying vision of a more secure and prosperous France, preserving a tolerant culture. Will Juppé be the next President? Only time will tell. One thing is certain, however, Juppé stands a very strong chance of winning and is certainly a force to be reckoned with.