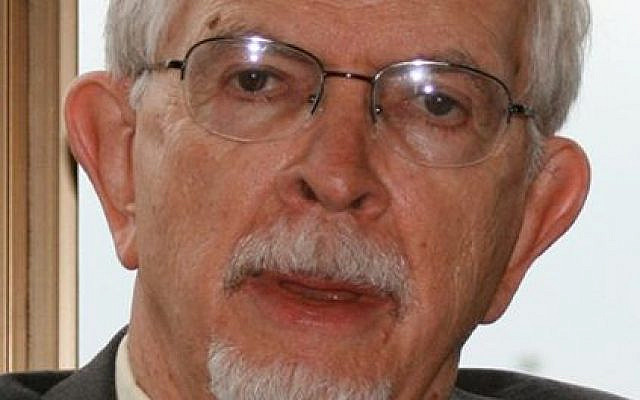 A few months ago, Christian Century did the unthinkable. It admitted that the writings of its longtime editor, James M. Wall, had “at times devolved into anti-Semitism.”

A few weeks after that, after some pushback, the editors went even further, admitting that after his time at the magazine, Wall wrote for and served as editor of Veterans News Now, a website that “trafficked in blatantly hateful material.” The editors declared, “It is not mere guilt by association to maintain that Wall’s writing for an extremist site—and lending it his name and reputation—created a troubling context for his own, much milder use of antisemitic ideas.”

These admissions, which gave Wall too much credit for promoting a “milder” antisemitism in his own writings, were still a bombshell — reminiscent of Khrushchev’s 1956 speech in which he denounced Stalin. Christian Century is the flagship magazine of mainline Protestantism in the United States, and it the magazine to admit that one of its longest serving editors had promoted antisemitism was a really big deal, even if the evidence was overwhelming.

Like one of Wall’s predecessors at the magazine, the antisemite Charles Clayton Morrison, who served as editor of the publication from 1908 to 1947, Wall simply had it in for Jews and for Zionism. The very ideas that Israel had an obligation to protect its citizens from Palestinian acts of terrorism and that Palestinian leaders bore a huge measure of responsibility for the continuation of the Israel-Palestinian conflict were anathema for Wall, who was also an ordained Methodist pastor. 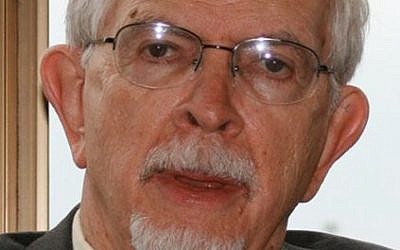 Wall served as editor of the Chicago-based magazine from 1972 to 1999 with leaves of absences from the publication to run political campaigns. After stepping down as editor in 1999, he served as contributing editor until 2008. During his time as editor and contributing editor, Wall regularly railed against Israel. After 2008, Wall started his own blog, Wallwritings, and in 2012 he became associate editor of  the previously mentioned “Veterans News Now,” an antisemitic website that promoted the writings of David Duke. He served in that post until 2017.

One of Wall’s lowest points came in late October 2011 when he lionized two terrorists – Ahlam and Nezar Tammimi, who were released from Israeli prison. In his piece about the couple, Wall expressed an ardent admiration for Ahlam, a woman who pleaded guilty to the deaths of 16 Israeli civilians in the Sbarro bomb attack on August 9, 2001. (Ahlam Tamimi directed the bomber to the pizza shop.) Wall did not report, however, that after her release from Israeli prison, Ahlam said she did not regret what she did because she had “dedicated [herself] to Jihad for the sake of Allah, and Allah granted me success.”

Wall used scare quotes around the word crimes when describing why Ahlam and her husband (whom she married in jail) were sent to prison by the Israeli government. He also chided Israel for releasing the couple to different locations, as if they owe Ahlam – a woman who is glad to have helped murder more than a dozen Israeli civilians – a honeymoon with her new husband. Wall’s piece, along with his association with antisemitic white supremacists, was an ugly act of contempt.

Instead of confronting Wall’s behavior, the magazine engaged in a campaign of gaslighting its critics. Aside from an oblique statement about not agreeing with Wall’s writings, the magazine and its staffers failed to correct Wall’s factual misstatements while he wrote as a columnist for the magazine (after stepping down as editor), his incessant Jew-baiting in his blog, and lastly, his shameful affiliation with white supremacists at Veterans News Now.

One staffer justified CC’s decision to keep his name on the masthead despite his open affiliation with antisemites by declaring that Wall “did a lot” for the magazine. Eventually Wall’s name did come off the masthead and finally, after his death, the magazine obliquely admitted that its former editor had gone off the rails on issues related to the Jewish people and Israel. And when people complained in letters to the publication about its assessment, the magazine, to its credit, stood by its assessment. And in its response to Wall’s defenders, Christian Century rehashed all the information about Wall’s career that CAMERA and others had amassed over the years.

The magazine even published an editorial that condemned Hamas and Fatah for their role in continuing the conflict in the same issue as Wall’s obituary. The editorial still placed most of the blame for the conflict in the Holy Land on Israel and its then-Prime Minister Benjamin Netanyahu, but still it was an improvement.

The editorial nevertheless revealed an ongoing problem with the magazine’s coverage of conflict in the Holy Land: Judeo-centrism.

In CC’s coverage, Jews and their state are the center of every moral dilemma, catastrophe, and failing in the Holy Land. It is the behavior of the Jews that needs to be assessed first and last when working to promote peace. The stated reason is that Israel is the more powerful actor in the conflict. This narrative is being abandoned, by fits and starts, by Arab leaders in the Middle East who are signing on to the Abraham Accords, but the Christian Century has a long way to go on this score.

CC’s Judeo-centrism was on display in an article about Israeli Prime Minister Naftali Bennett published in the Dec. 1, 2021 issue of the magazine and published on its website on Nov. 15, 2021. The article, written by Mordechai Beck, CC’s go-to journalist when covering issues about Israel, falsely declared that no one in Bennett’s governing coalition had addressed the issue of settler violence in the West Bank and portrayed Israeli attacks on Palestinians in this area as being unprovoked and without reason. In fact, Israeli Defense Minister Benny Gantz spoke about the problem in mid-October, one month before the article was published on CC’s website.

The article, titled, “Understanding Israeli prime minister Naftali Bennett,” failed to report that numerous attacks – including deadly ones—have been perpetrated by Palestinians against Israeli settlers over the past few years. For example, Israelis were shocked by the murder of Esther Horgan in December 2020 while she was running near her home in Tal Menashe in the West Bank. Ironically, CC never covered this killing, which had a profound impact on the mood of Israelis.

More recently, Israelis have witnessed displays of Nazi symbols on numerous occasions over the past few months and a car-ramming attack in early October. Additionally, Palestinians have been throwing rocks and Molotov cocktails at cars and buses in the West Bank. Moreover, in 2016, at the height of the stabbing intifada, which terrorized Israelis, a majority of Palestinians told pollsters they supported a continuation of knife attacks. Ignoring these problems reveals the magazine’s Judeo-centric impulse.

Christian Century has made gestures toward transcending its obsession. In early 2020, the magazine published an article by Cary Nelson. The article, titled “What steps toward peace could Israelis and Palestinians take now?” reads in part as follows:

There are clearly more imperatives here for Israelis to act than Palestinians, in part because Israelis are the greater power and have overall control of the West Bank. It is also likely that the Palestinian Authority will have more flexibility to act if Israel sets an example by unilaterally improving conditions. The PA security services, however, have prevented hundreds of terrorist acts since 2015, a pattern that could be further improved with greater public support. Curtailing violence and incitement to violence is the single highest priority for the PA if it wants to see good faith efforts by Israel.

When it comes to Gaza, however, I have little faith in the ability of the ruling Hamas party to reform itself or even its interest in doing so, other than eliminating rocket attacks and violence on the border. There are humanitarian and pragmatic reasons for Israel to initiate reforms in Gaza, but reciprocity is not a realistic expectation.

Nelson’s article is well-intentioned, but there’s a problem that he failed to address. Hamas does more than launch rockets into Israel from the Gaza Strip. It incites violence on the part of Israeli Arabs in Jerusalem, on the Temple Mount especially, but elsewhere in Israel as well. It has also worked to destabilize the Palestinian Authority’s control over the West Bank. These are real obstacles to peace in the Holy Land that can only be brought to an end by Palestinians themselves and for this to happen, their must be a fundamental transformation of the  political culture in both the Gaza Strip and the West Bank. And that has to come from the Palestinians themselves.

Israel may be the more powerful party to the conflict, but it cannot bring an end to Hamas’s misdeeds through some magical combination of peace offers and withdrawals. It tried that in 2005 when it withdrew from the Gaza Strip and got rockets in return. This is one of several stubborn realities that CC’s stubborn Judeo-centrism has obscured. Its authors continually rail on Israel, because it is easier and safer to do so, while remaining relatively silent about Palestinian misdeeds, whose deeds are less satisfying to talk about.

For example, the article fails to mention the lack of elections in Palestinian society, even as it described Israeli politics as “deadlocked” as Israeli voters headed […] to their third parliamentary election in 12 months.” The article chided Israel for having so many elections but said nothing about the Palestinians having so few!

Mahmoud Abbas, the President of the Palestinian Authority, is about to finish the 17th year of his four-year term, having last been elected to office in early 2005. Numerous polls indicate that a majority of Palestinians want him to step down. Given this reality, just how reasonable is it for Israel to negotiate with the Palestinian Authority? Does the PA even have the legitimacy to do the things Nelson requires of it? And more to the point, when will Christian Century produce an article titled “Understanding Palestinian President Mahmoud Abbas” that addresses his lack of legitimacy, highlights his corruption and documents his authoritarianism?

Whoever serves as editor at CC needs to remember this: the chair they are sitting in (metaphorically speaking of course) has been occupied by two inveterate antisemites who used their power at the magazine to portray Jewish power in singularly malign terms.

Charles Clayton Morrison assailed Jews and Zionists during the Holocaust and Wall assailed Jews as they were being murdered by suicide bombers during the First and Second Intifadas. After he left the magazine for good, he lionized terrorists and threw in his lot with white supremacists, not because he was a white supremacist himself, but because he agreed with what they said about the evils of Jewish power. Their shared communion was contempt for sovereign Jews exercising their agency and right to self-defense.

Every story, ever paragraph, every sentence, and every word published in the magazine that relates to Jews and Israel will be read in light of this history.

This is a shameful legacy that every future editor of the magazine will labor under.

If the magazine wants to get out from under the shadow of antisemitism cast by Morrison and Wall, it must abandon its Judeo-centric treatment of conflict in the Holy Land — and the Middle East in general — and assess the behavior of Palestinians with the same force with which it interrogates Israeli and Jewish behavior.

Maybe it will happen, but not anytime soon.