Israeli citizens Musa Hussein (100 years old), Amna (98) and Ahmed (74) all remember the day in 1956 when Israeli minorities officer Haim Tzuri brought the Abu Al Qian tribe to their new home. They had been expelled from their lands in the Negev desert, and moved several times. Tzuri promised them in the name of the State of Israel, both orally and in writing, that here they could rebuild their lives. They received long term leases.

When I was young, my parents taught me that promises must be kept. We read in Psalms, “Adonai, who may dwell in Your tent, and who may dwell on Your Holy Mountain? S/he who….Who gives his/her word and, come what may, does not retract.” (15:4)

However, the State of Israel has retracted.

Eviction/demolition orders for 100 year old Musa and another 30 family members go into effect on Monday. Ahmed has already been forced out of his home. Amna knows that her turn is coming.

Frail and unable to get out of bed without help, Musa recalls detail after detail from 1956. However, he becomes agitated and fearful when he contemplates his immanent expulsion. His words fail him. My words also fail me. What have we wrought? What can I say when my country is breaking its promises and turning a 100 year old fellow citizen out of his home simply because he isn’t Jewish, and the Jewish State is determined that Jews should live there?

Ahmed and thirty family members were forced last month to “agree” to move to the nearby Bedouin township of Hura, and demolish their own homes. Otherwise, Israel would have demolished their homes and billed them for it. Despite all the talk of generous compensation, they now live in tin shacks with holes in them in a “neighborhood” of the Hura township. The beginnings of what might eventually be a proper street leads to their “neighborhood,” and there Is a pipe sticking out of the ground that might one day be a water main. Even the NIS 900 per square meter Ahmed’s family was promised for their abandoned homes hasn’t materialized, and Ahmed doesn’t believe it ever will.

Interior of one of the rooms Ahmed and his family now live in.

Why? For what possible reason are Musa, Amna, Ahmed and some 400 additional men, women and children being turned out of the homes they were promised? KKL-JNF bulldozers began work in August 2015 to build Jewish “Hiran” on the rubble of non-Jewish “Umm al-Hiran.” 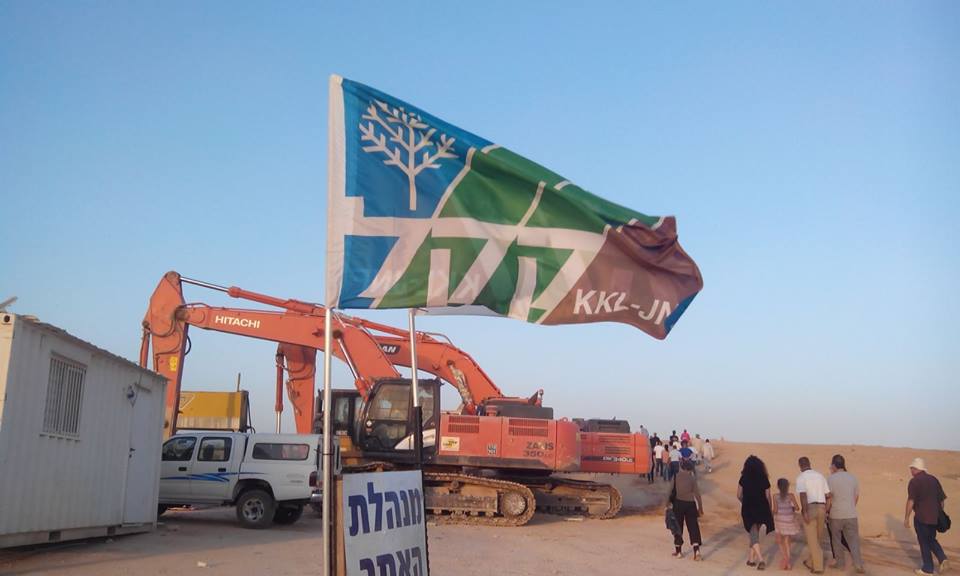 This is part of the greater Arad development plan. In fact, while the Begin-Prawer legislation that would have led to the demolition of tens of villages, the transfer of some 40,000 non-Jewish citizens from their homes and massive dispossession was frozen in 2013, many elements of the plan are being implemented without legislation throughout the Negev. (If Minister Uri Ariel has his way, there will also be a return to legislation. A draft already exists.)

Umm al-Hiran residents bitterly compare themselves to Amona. They have lived for 62 years on State land inside Israel proper, where the State put them. Amona residents put up homes without permission on lands belonging to others. The plight of Amona residents has elicited tremendous empathy, demonstrations and Knesset resolutions. The government is offering them tremendous amounts of compensation and is determined to relocate them to an acceptable location. While the Israeli judicial system has been unequivocal regarding the implementation of justice in the case of Amona, they have been incredibly equivocal regarding Umm al-Hiran. Top Israeli legal experts Professors Mordechai Kremnitzer and Hanoch Dagan have written on behalf of the Israeli Democracy Institute that the Israeli Supreme Court agreed that the cause of Umm al-Hiran is just, but refused to intervene because “they appealed too late.”

At one level it seems like a win win agreed upon solution is agonizingly close, but then it becomes apparent that everything is smoke and mirrors. Umm al-Hiran residents are willing to live in Hiran along with Jews, but the religious former settlers encamped in the nearby forest until they can move in will hear none of that. Israel says the community will be open to all, but we all know what chances non-Jews have of making it through the acceptance committee. The residents are willing to talk about a new location that allows them to continue to live their lifestyle, and negotiations at high levels over such an option seemed to be progressing well-until Israel demanded that everybody immediately move to Hura with no agreement or guarantees. For some strange reason Umm al-Hiran residents fear that, once they are out of the way, the State will never speak to them again. Why should they come to agreement, as the State did with unrecognized Bedouin village in the north? Who cares whether the residents and their children, or even the entire Negev Bedouin community feel they are a part of the State? We can use the full power of the State to get what we want without the need for an agreement, or conceding anything. Last week the Negev Bedouin Development and Settlement Authority sent Umm al-Hiran residents a letter saying that, despite everything that had been said when there had been discussions, there were no agreements and the Authority preferred to negotiate separately with each family.

We Jews, who have known much suffering, are commanded not to treat others as we were treated, “You shall not oppress the non-Jew living among you, for you know the soul of the stranger, because you were strangers in the land of Egypt. (Exodus 23:9) The ancient rabbinic midrash teaches that, when God was considering having mercy on the Egyptians, the angels reminded God how the children of Israel had suffered.

I fear that one day in the heavenly court, a hundred year old man named Musa Hussein Abu Al Qian who was expelled from the home Israel promised him will stand in silent testimony against us. No amount of past Jewish suffering, no references to Arab injustices against us for which Musa is not responsible, and no comparison to greater evils committed in other parts of the world will be of any avail.

But, it isn’t too late to stop this injustice, if we all do our part. We can freeze the eviction/demolition orders, and return to negotiations. It still could be that in the heavenly court and in the eyes of the world Musa will be a witness that the Jewish State knew how to get a hold of itself, remember our people’s past, actualize the dream of equality ensconced in our Declaration of Independence, find the way to solve problems through agreement and build a shared future for all Israelis.

Ken Yehi Ratzon. May it be God’s Will, and ours.