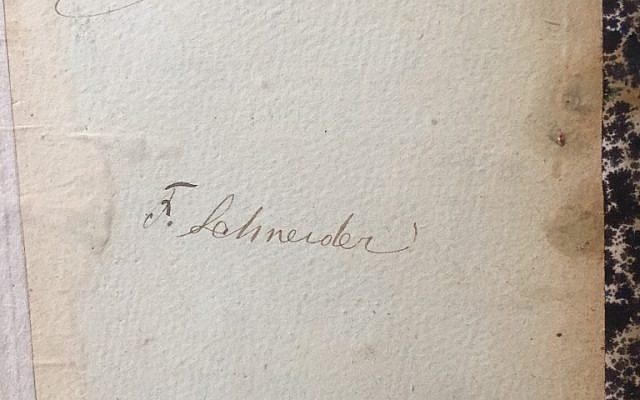 We are part of a collective history and destiny, perhaps the strangest and most miraculous the world has ever known. That is our inheritance, and the most important thing we can do is to hand it on to our children.”
—Rabbi Jonathan Sacks

“Might you want the siddur (prayer book) that belonged to our great-grandmother?”

The woman’s voice on the answering machine was unfamiliar but warm, belonging to a cousin whose name I recognized at once. Our mothers, both deceased many years, had been first cousins. They were close, despite a significant age difference. But the next generation, my generation of cousins, did not know each other well.

I called my cousin back immediately.

She explained that she was sorting through things when she came across our great-grandmother’s siddur. Around the same time she noticed my name listed as a speaker on Judaism for a community education course. She thought that the book might mean a great deal to me.

For someone who didn’t know me, she did, in fact, know me very well.

And I knew something about her too– that she had reverence for our heritage and a generous heart.

We soon met for lunch.

‘Here it is’, she said, and placed a box on the table.

Inside was a slim Hebrew volume titled ‘Seder S’lichot‘, a book of penitential poems and prayers, recited by Jews in the period leading up to the High Holidays and on Fast Days. The book was published in 1901 in Vilna, Lithuania. It’s delicate pages were golden with age. 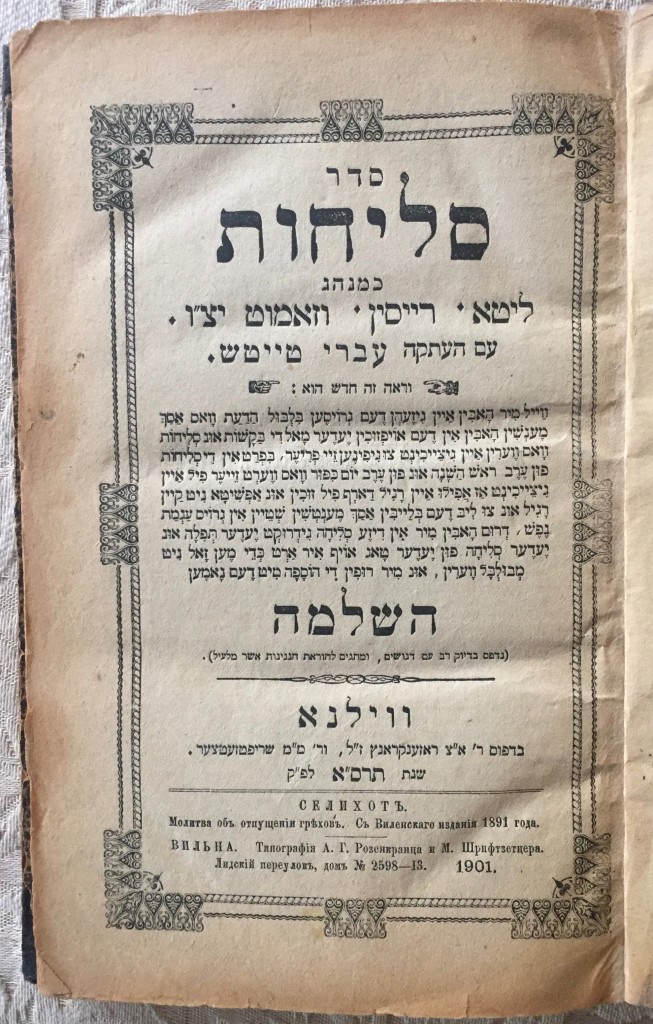 On the inside cover, written in elegant, perfect Hebrew script, was my great-grandmother’s name: Fruma Schneider. 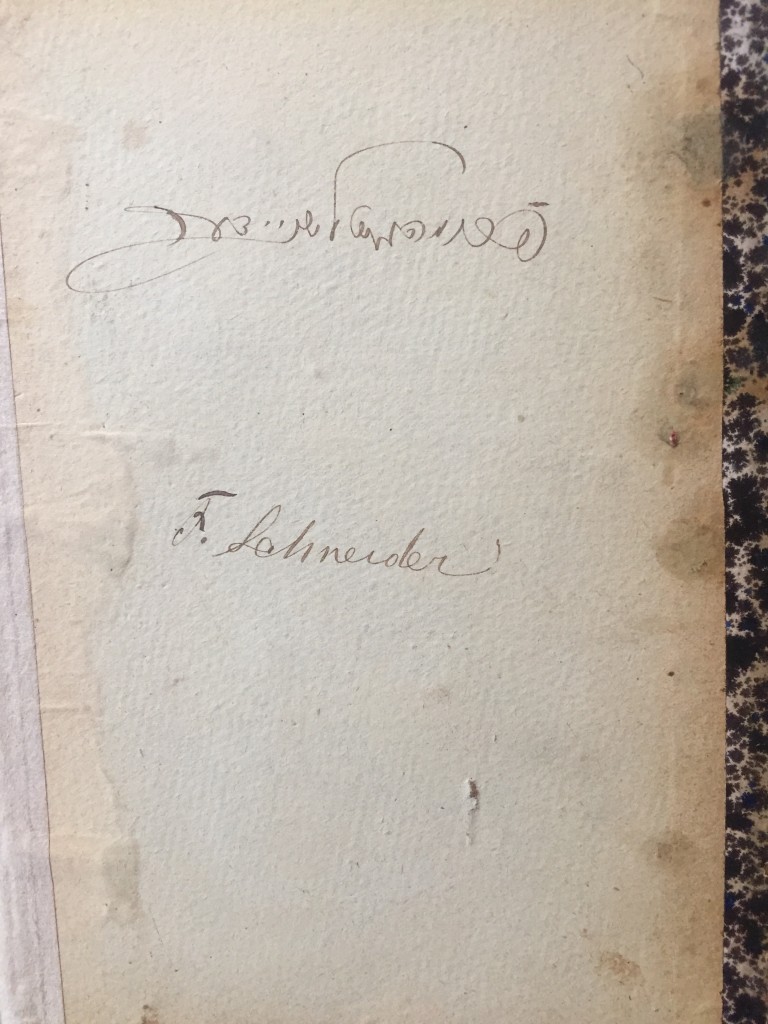 My delight that she could write her full name in Hebrew (how many non-Israeli Jews can do that?) was matched by the realization that this siddur really did belong to her. Not to her husband. Not to the family. It was hers.

My Schneider great-grandparents and their three children left Lithuania for America in 1906. My grandfather, their youngest child, was seven years old.

When Fruma Schneider left the ‘old country’– forever– she could have left the siddur behind. No doubt there were many items she left behind. But not this one. Maybe she thought, ‘Do they even have Hebrew prayer books in this strange new country? I’d better bring my own.’ So she squeezed the siddur into an overstuffed trunk or tucked it into a heavy bag on her arm.

I know nothing else about Fruma Schneider, who died years before I was born. Anyone with first-hand memories of her is long gone too. I can only look at the siddur and speculate on what Judaism meant to her, on what she hoped to pass along to her children. But this much is clear to me: A woman who’s packing up her possessions, and thinks a siddur is worth taking along, is a woman who believes in Jewish life.

Today in America, when it is easy to be a Jew, many Jews opt out. Secular life is irresistible. Shaking off Judaism’s endless obligations feels liberating. Sailing through life, weightless, seems like the ultimate freedom. The wisdom of a four thousand year old tradition is replaced with the wisdom of one’s heart.

Back in Fruma Schneider’s time and place, the issue of Jewish survival was a physical one — how to keep Jews alive. Now, at least in the diaspora, the issue is how to keep Judaism alive. The question is often asked, ‘Will we have Jewish grandchildren?’

I wish I could tell Fruma that by this measure, she achieved spectacular success. She is having a baby boom of Jewish great-great-great- grandchildren, with still more on the horizon.

A hundred years from now, will I have even come close? That’s my challenge, that’s every diaspora Jew’s challenge. And that is why this fragile old siddur means so much to me. It’s more than a treasured piece of family history. It’s an object of aspiration, a reminder that Judaism is a treasure we bring to vivid life and then pass to the generations that follow.

About the Author
Sally Abrams co-directs the Speakers Bureau of the Jewish Community Relations Council of Minnesota and the Dakotas. She has presented the program “Israel and the Middle East: the Challenge of Peace” at hundreds of churches, schools and civic groups throughout the Twin Cities and beyond. Sally speaks fluent Hebrew, is wild about the recipes of Yotam Ottolenghi, the music of Idan Raichel, and is always planning her next trip to Israel. Visit: sallygabrams.com
Related Topics
Related Posts
Comments
Advertisement