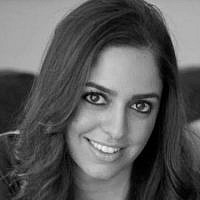 The Blogs
Adelle Nazarian
Apply for a Blog
Please note that the posts on The Blogs are contributed by third parties. The opinions, facts and any media content in them are presented solely by the authors, and neither The Times of Israel nor its partners assume any responsibility for them. Please contact us in case of abuse. In case of abuse,
Report this post.

The vandalization of Nessah Synagogue in Beverly Hills, California, the most renowned Persian Jewish Temple outside of Iran, in December is the vile tip of an iceberg of anti-Semitic hate that has been lurking and expanding beneath the surface of civil society and the West. Nessah Synagogue serves as a place of worship for the largest population of ex-patriate Persian, or Iranian, Jews living in Beverly Hills and the surrounding area, many of whom forced to flee Iran over religious persecution and harassment for the crime of being Jewish.

On Friday evening, December 14, 2019, before morning worshippers arrived for their Shabbat prayer services Saturday morning, Rabbi David Shofet and several congregants were met with a scene that would make the stomach of anyone with a similar set of circumstances churn. The place of worship was ransacked, Torah scrolls were torn, Jewish artifacts destroyed, talliot (fringed traditional prayer shawl) strewn across the floor, and windows shattered.

This hatred for the Jewish people has grown so large and gotten so dark that there is no longer room for it to hide beneath the surface. Sunlight is the best disinfectant.

“History can, indeed, repeat itself,” Rabbi Shofet cautioned. “When I saw the Torah thrown upon the ground, I not only wept but and felt an internal revolution, but I also felt that Am Israel Chai; the Jewish nation will always live on.”

Persian Jews know far too well the pain of exile; it’s a hurt that is felt by so many other ethnic communities throughout the United States. Many of them came to America to escape the threats to their religious freedom and liberties. And this latest crime only reaffirms that there is a major problem in the West.

Anti-Semitism is an issue encompassing hatred, bigotry, and racism. And we’ve seen it rear its hideous face time and time again; even more so in recent days.

The Nessah incident is only the latest in a string of ant-Semitic and hateful incidents to affect our nation and arrives just over one year after the massacre that claimed 11 lives at the Tree of Life Synagogue in Pittsburgh, Pennsylvania. And six months before that a gunman opened fire at the Chabad of Poway synagogue outside of San Diego, killing one person who gave her life to protect the rabbi, who was injured along with two others.

Also in December, in Jersey City, New Jersey, a couple opened fire in a heavily Orthodox Jewish part of town killing four people, including a police officer; countless lives shattered as a result. An investigation uncovered a The incident had anti-Semitism at its core. Video captured non-Jewish neighbors saying they “blame the Jews. ‘Cause we never had a shooting like this until they came. If this had been the other way around, they’d be killing us,” the unidentified African-American woman said. ‘Look how black people act. We can’t do it to them?’” she said. “My children are stuck at school because of Jew shenanigans.”

Another person, a man, could be heard saying, “if they was dead, they got shot dead, that’s great.” A second woman was captured on camera saying, “get the damn Jews the f*** out of here… get the Jews out of Jersey City.”

It was later revealed that the man and woman who gunned down the police officer and several Orthodox Jews were also carrying explosives in their van that were capable of causing damage extending the length of five football fields; dozens if not hundreds more could have died if their explosives had been detonated.

The issue has reached government levels.

This past September, in Paterson and Trenton, New Jersey, two Democrat officials made revolting anti-Semitic comments, saying negotiation tactics employed by a Jewish city attorney were an attempt to “‘Jew’ us down” and the other saying, “They were able to wait her out and Jew her down for $22,000 with pins in her knee that can never ever be repaired.”

Typically, this virulent hate has come mostly from the far-left, although elements of anti-Semitism certainly exist on the far-right and from radical Islamists. Many Democrat officials refuse to address the rampant bigotry amongst their own party leaders, and the media refuses to give fair coverage of the events that follow. In far too many cases, they fail – either willingly or out of sheer ignorance – to report the facts that are at the heart of these dangerous and unacceptable incidents. The Democrat Party had, at one brief time in history, done some good things for America. That party no longer exists. That party is dead. The Democrat Party claims to be the “party of peace” but it has clearly been outed as the party of bigotry, discrimination, intolerance and hate.

And let’s not even get started with Sen. Bernie Sanders (D-VT).

This same hatred against Jews has affected Hindus too. In April, Devendra Shukla, a Hindu priest who preaches in Mahwah, New Jersey, was with his 6-year-old daughter when he was branded a “dirty Indian” and punched in the face. Journalists revealed that Shukla’s assailant had a Facebook account featuring flags in support of the Democratic Confederacy. Those images have since been removed and the attack investigated as a hate crime.

Following the attack on Shukla, 62-year-old Hindu priest Harish Chander Puri was brutally beaten near a New York temple. His attacker screamed “this is my neighborhood” during the horrific assault. Puri’s injuries were so severe that he had to be rushed to the hospital.

Across the pond, in Europe, there has been a mass exodus of Jews from France to Israel over virulent anti-Semitism to the point where it is literally unlivable for Jews to live there. In fact, the situation for Jews in France only continues to get worse. Approximately 7,000 Jews are leaving France annually over anti-Semitism.

And following the recent elections in the UK, the far-left in France blamed the Jews for UK Labour Leader Jeremy Corbyn’s defeat. French far-left leader Jean-Luc Mélenchon both alleged that Britain’s Chief Rabbi and “pro-Likud networks” had orchestrated a campaign against Corbyn, adding that “unlike Corbyn”, he would never give in to Jewish groups. France has become infamous for a mass Jewish exodus from its nation following a rise to what has hopefully reached its crescendo in anti-Jewish hatred.

At home in America, it’s seemingly the far-left wing of the Democrat Party that has taken up this mantle of hatred. The party has expressed nearly unabashed support for Linda Sarsour, who was even asked to become a campaign surrogate for Bernie Sanders, despite her repeated anti-Jewish comments and support for oppressive Sharia Law.

Hate, bigotry, anti-Semitism cannot be ignored and allowed to fester, as they have for decades, beneath the surface. Every elected official and person who believes in religious freedom and upholding the values and principles that govern our great nation has a responsibility to stand up and speak out against these crimes against humanity. The only way we can defeat this is through unity.