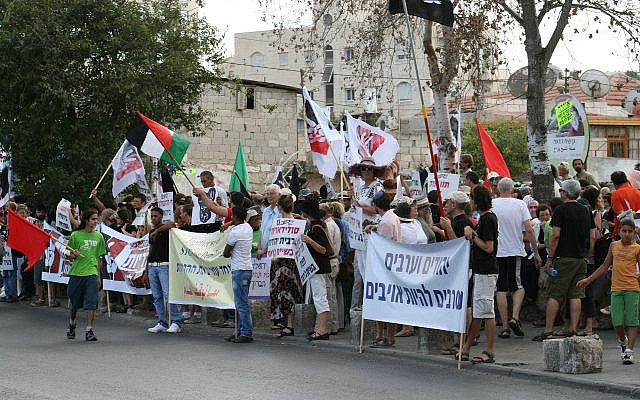 Since we (the Jewish people) are a “righteous nation, keeping faith”, our “conquest” (of the land of Israel) can only take place via the path of peace, by means of fair purchase… It [must be] our will to uphold the commandment to “love your neighbor as yourself” not only with individual people, but also with the [other] nations.  ~ Rav Kook, M’amrei Ra’ayah

Every judge who does not judge truth unto its deepest truth (emet l’amito) causes the Shekhinah (divine presence) to flee from Israel (meaning the Jewish people or the land). And every judge who takes from this one and gives to that one not according to law, the Holy One excises life from him, as it is said (Prov. 22:23), “and those who defraud [the poor, Hashem] will defraud them of life.”  ~ Maimonides, Mishneh Torah, Hilkhot Sanhedrin 23:9

Sheikh Jarrah is one of the points of grave inflammation that have led to the current fighting in the streets, to Hamas’s rocket terrorism, and to Israel’s retaliation (the other being the rioting and police crackdown on the Temple Mount/Al-Aqsa).

It seems absurd in this moment to talk about Sheikh Jarrah in isolation, but we need to do that if we want to have moral clarity.

We have to ask, are the legal cases in Sheikh Jarrah being judged according to the deepest truth, as Maimonides would demand? Rav Kook has in mind how Arabs are treated when he talks about “fair purchase” and when he applies “loving your neighbor as yourself” to the “other nations”. But could the judges in Israeli courts extend the commandment to “love your neighbor” to the residents of Sheikh Jarrah, even if they wanted to?

We know that the Jews who want to move into those homes do not uphold that commandment as Rav Kook understands it. According to their belief, “love your neighbor” only applies to other Jews.

Then there are the facts, which are not so ambiguous: In the Arab neighborhood of Sheikh Jarrah, a group of Jews who avowedly seek the ethnic cleansing of Jerusalem want to take over houses in that neighborhood’s center. True. In homes built for Jews before ’48, Jordan’s government settled Palestinian refugees from the ’48 war. True. After Israel took over in ’67, Jewish organizations claimed the title to the houses in Sheikh Jarrah. Also true. They secretly sold that ownership later to the organization representing these Jewish “settlers”. Also true.

Can ownership of the houses in Sheikh Jarrah be claimed by Jews who have no historical connection to those houses? Just because they purchased those rights?

Of course, you might say, that’s how property law works! But if so, then the families of those ’48 refugees now living in Sheikh Jarrah, who had homes in West Jerusalem, in Haifa, and other places—people who had not only ownership and title but also a living connection to those homes, who may have even built them—they should also have the right to move back into their homes. Either both are true, or neither are true.*

And if we want to compare these property claims on a deeper level of truth? What would be the perspective of the One who said, “you will not sell the land in perpetuity… each person may return to their family’s holding (ish el achuzato)”? (Lev. 25)

Shouldn’t the rights of the families in Sheikh Jarrah, who have been living there since the 1950’s, come before the rights of the Jews who have zero familial connection to Sheikh Jarrah? The Jewish settlers who want to move in say that because they are Jews, they can claim those properties “on behalf of the Jewish people”. Many halakhic sources would agree with that idea, even probably Rav Kook, but it’s definitely not “ish el achuzato”, it’s not returning a person to his familial land. More importantly, in this context, it’s a cover for racism.

Technically, the rule of “ish el achuzato” only applies after the land is distributed equally among all the Israelite tribes, and halakhically it only applies to Jews. But the spirit of the rule is more than that. The only way the rights to those homes could be acquired through “fair purchase”, as Rav Kook demands, is if the families of Sheikh Jarrah had first been offered the chance to acquire those rights and turned it down. Of course, that did not happen.

Letting homes be taken over for the sake of ethnic cleaning goes against one of the most fundamental legal principles in Torah, k’ger k’ezrach – one law for citizen and stranger.

So should we support upholding “property rights” under those circumstances? Is that “according to the law”? Or is there something sacred and worthy of legal standing in the tenancy of these Palestinian families in their homes for seven decades?

Give the Sheikh Jarrah families back their properties inside Israel, and then you can talk about property rights. Until then – be quiet.

(I shouldn’t have to say this, but I do: None of this can justify Hamas’s rocket terrorism.)

In the same section of Mishneh Torah, Maimonides also wrote:

Every judge who judges truth unto its deepest truth, even for one hour, it’s as if he fixed the whole world entirely (tikein et kol ha’olam kulo) and caused the Shekhinah to rest upon Israel, as it is said (Ps. 82:1), ‘God stands in the council of the divine.

In the year 2021, the eve of Shavuot, when the Torah of justice was revealed, falls on the date Palestinians call Nakba Day. The reality may be complex, but the path of justice, the path that would allow the Shekhinah to rest upon Israel, is the path that supports the families in Sheikh Jarrah.

May Shekhinah protect the innocent, Jewish and Arab, Israeli and Palestinian, along with all who pursue peace, from racist gangs and rapacious laws, from rockets and missiles. May there be time and will enough to pursue justice in Sheikh Jarrah. May the judges judge truth unto its deepest truth. And may we act to strengthen the hands of righteous judges.

*  If you want to know more about the actual law that is the basis for denying Palestinians the right to reclaim even their own houses where they once lived, you can read the “Absentees’ Property Law” on the Knesset website.