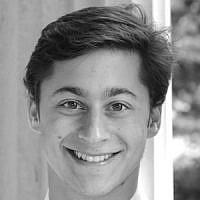 I called her one Tuesday afternoon in grade 12.

“Hey Bubbie, I’m working Thursday night at Clatworthy, right near you. Should I come for dinner beforehand?”

I didn’t mark that day down in the calendar. Maybe I should have.

What business does a 17-year-old kid have calling his bubbie to say “make me dinner?” Grandmothers of all religions are famous for their unconquerable compulsion to deliver copious amounts of food to their descendants at the drop of a hat, but asking for it seems presumptuous, almost selfishly patronizing.

I soon learned the price I’d have to pay.

“Zachary I need you to help me print these pictures”

After fulfilling my tech support duties (or at the very least, admitting defeat and advising her that my brother is better with computers anyway, a statement that gets more true with my growing frustration and/or hunger) it’s time for dinner. While these are not the feasts that I’ve experienced at this table in years past, it’s always filling and always delicious.

My first dinner, I had no idea what to expect. What would we talk about? A 17-year-old guy and an almost-80 woman don’t really have that much in common, besides for a mutual and comical misunderstanding of the generation dividing us. And until that first dinner, one-on-one conversations were far from rare, but more often a part of a larger family gathering.

As it turns out, there was nothing to worry about. She regales me with tales of my father’s generation and youth, of her youth in Mile End, Montreal. Her father, Shulem’s kosher butcher shop. Her dates with Canadian legend author Mordechai Richler (my favorite is the time that, during a movie, she decided he was too… handsy, so excused herself to the powder room, and took the streetcar home. Such Chutzpah!). Their late 70’s exodus from La Belle Province. The early days of my life, before the stuff I can remember. In return I talk about school and work and my friends and my dating life. We argue over politics, Israeli and Canadian, mainly over details. I exalt my deeply held and often contradictory beliefs. She chuckles and reminds me how much I’m yelling at myself.

Afterwards we talk more, as Jeopardy plays in the background. I casually interject the answers I know. She’s impressed by my knowledge of the information, but not impressed with me. I need to wake up a lot earlier in the morning than that. So I do.

Eventually I look at the clock and realize that I have to get to work. But next week, I’m right back at the same table.

The next September, I go away to school. Guelph isn’t too far, but it’s too far to come home for dinner on a Thursday night. But every winter break, every reading week, every summer vacation, Thursday nights are officially booked off in my calendar.

We talk about the same things over and over, and more and more, and there’s no such thing as information that’s off limits. I cry to her more than once when I’m having problems with my family or friends, with my schoolwork, with my relationships. She’s always ready with hot soup, a good meal, a pile of fruit for dessert, and a truly sympathetic ear that challenges you to tell the truth, the whole truth, and nothing but the truth, even when it hurts.

If you want a true friend, someone who always has your back, but will never hesitate to let you know how much of an idiot you are sometimes, call your bubbie and go for dinner. Bubbies have seen it all. They raised your parents, and both they and your parents survived. They have stories about where you came from and who you came from. That kind of thing is important to know. My high school history teacher used to edit George Santayana’s famous quote “Those that don’t study history are doomed to repeat it”. So knowing your family history can be beneficial. More than that, you’re no special snowflake; chances are you’ll end up having more than a little bit in common with someone who gave you ¼ of your DNA. And you’ll never find anyone else that will love you unconditionally, even when you’re being a schmuck.

So whenever I go home and stay with my parents, if I’m home on a Thursday, you’ll know where to find me: pretending to know things about technology, eating a good meal, and playing Jeopardy with my Bubbie.