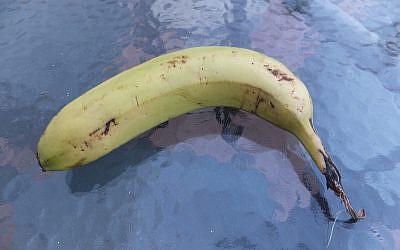 A Banana.  Would you fight a war over this?
(Photographed and Eaten by the Writer.)


American comedian Joey Adams had the right idea. Born Joseph Abramowitz, which sounded a little too Jewish for his liking, he came up with the immortal one-liner …..
“With friends like that, who needs enemies?”

We in Israel have a good “friend”, the United States of America.
In the latest show of friendship, we have been told that the Allenby Crossing for Palestinians must be open 24-7.

Perhaps we should emulate our good friend and open the border from 06:00 to 22:00 as do the Americans open their border with Mexico. No crossing at any time there.

What gives our American “friends” the right to tell us anything, let alone when to open our borders. Perhaps they do not know that we are surrounded by people who hate us and will do anything to destroy our new-born country. There is no shortage of murderous terrorists looking for an open border.

Perhaps we should remind our good friend that they were happy to finance and direct the invasion of another, independent country. In 1961 some 1,500 Cuban exiles tried to get ashore at the Bay of Pigs in an attempt to overthrow Fidel Castro. Fortunately, this interference in another country’s internal affairs failed.

The United States has a long history of invading other people’s countries. I present some examples, selected at random.

In 1983, it was the small island of Grenada that suffered the wrath of the United States. Operation Urgent Fury was intended to protect US students, restore democratic government, and eliminate Cuban influence.

In 1989 they were at it again. Operation Just Cause, the invasion of Panama. This time they were after Panamanian leader, General Manuel Noriega. He was suspected of racketeering and drug trafficking. It did not end well for him.

In 2001, it was Afghanistan’s turn. In the so-called War on Terror the USA invaded. To try and legitimise its military operations it gave them names such as Operation Enduring Freedom and Operation Freedom’s Sentinel. Who could argue with that?

In 2003 the USA invaded Iraq. The U.S. President, George W. Bush, declared that the intention was to disarm Iraq of Weapons of Mass Destruction. He seemed unaware that a UN inspection team had not found any evidence of WMDs just before the invasion started.

Of more interest is the next country to be invaded by America.
As they say … Watch this space.