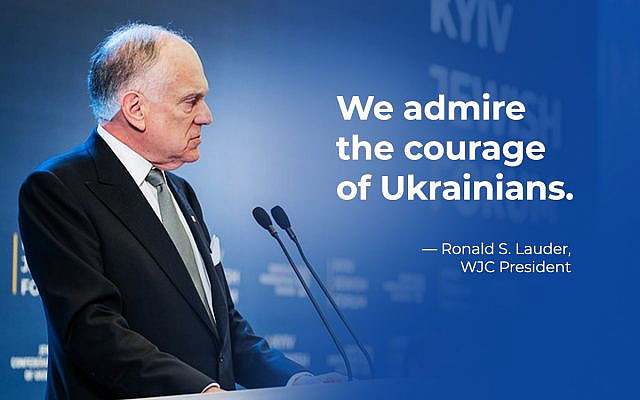 Picture by Jewish Confederation of Ukraine
Words of respect by World Jewish Congress President Ronald S. Lauder addressed to the Ukrainian people at the meeting of the WJC executive committee in Prague were the most sincere: “We are watching the destruction with horror, but at the same time we admire the courage of Ukrainians.”
The Jewish world is not just watching the Ukrainians who resist the aggression that has become the identification of Nazism of the 21st century. Since the start of the Russian invasion, the WJC has already provided tremendous assistance in the evacuation of thousands of civilians from Ukraine – not only Jews, but everyone who needed it and whom it could help. This help will not stop, promised Ronald S. Lauder.
On behalf of the WJC, he expressed special gratitude to the neighboring countries of Ukraine: Poland, Moldova, Romania, Slovakia, to all countries that have opened their doors and hearts to a large inflow of temporary migrants.
The President of the WJC had the opportunity to form an impression about the Ukrainians even before the war: he had been to Ukraine more than once. He has many friends here, and I am glad that he has found them thanks to Kyiv Jewish Forum, in which he has already participated three times. Lauder’s signature stands under the Memorandum on the creation of the Holocaust Memorial at Babyn Yar, which a Russian missile hit in the first days of the war.