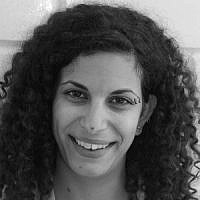 The Blogs
Or Seri
Apply for a Blog
Advertisement
Please note that the posts on The Blogs are contributed by third parties. The opinions, facts and any media content in them are presented solely by the authors, and neither The Times of Israel nor its partners assume any responsibility for them. Please contact us in case of abuse. In case of abuse,
Report this post.

Apparently a new unofficial Lego was released, Lego Strip Club. The obvious thing to say is that it is probably a toy for adults rather than for children, but honestly I think this is not a toy at all, this is a disgrace.

I volunteer in Saleet, a governmental organization to support and rehabilitate women survivors of prostitution. The dedicated team of Saleet works in the shadiest streets and neighborhoods of Tel Aviv, the areas where locals and tourists do not dare to visit, where the unseen people are located: prostitutes, drug addicts, migrant workers. The team makes huge efforts to assist women that want to try and leave the vicious circle of prostitution.

Many of the women in Saleet first “met” prostitution as part of their “job” in strip clubs. They say that striptease is the most humiliating thing to do: you are hardly treated as a human being, anyone can (and does) touch you while you are dancing and even when you are not. So for many of the strippers, prostitution is a better option. Can you imagine? Preferring to make your living as a prostitute, because being a stripper is even worse…

Such a toy limits the children’s conception of gender roles and preserves gender inequality. Furthermore, it teaches our children that consuming humans is ok, that abusing women is cool. The next generation deserves to get a better world for us. To do that, we must not accept such messages in toys. Don’t buy this shit.

About the Author
Or Seri was born and raised in the center of Israel She spent several years abroad trying to extend her cultural boundaries. She believes that the world was inherited from previous generations, and is also borrowed from future generations.
Comments