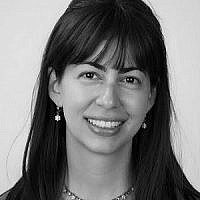 The Blogs
Lisa Septimus
Apply for a Blog
Advertisement
Please note that the posts on The Blogs are contributed by third parties. The opinions, facts and any media content in them are presented solely by the authors, and neither The Times of Israel nor its partners assume any responsibility for them. Please contact us in case of abuse. In case of abuse,
Report this post.

There is a discussion about the how to light Chanukah candles in Mashechet Shabbat 21b. The basic requirement of the mitzvah is that each household lights one candle for each of the eight nights.  The mehadrin, those who beautify (or chase after) mitzvot, have each member of the household light one candle. The mehadrin min hamehadrin – the uber-mitzva-beautifiers (or uber-mitzva-chasers) – light one candle the first night and add another candle each night (according to the view of Beit Hillel).

Practically speaking, in most Sephardic homes (where Rav Yosef Karo is the ultimate authority), the head of the household lights for everyone; whereas in Ashkenazic homes (where the Rama’s rulings take precedence over those of the Rav Yosef Karo), each family member lights his or her own Chanukiah. It might then seem curious that in many Ashkenazic homes women do not light. However, the reason is clear: the Mishnah Berurah rules (O”C 671:9) that a married woman can fulfill her mitzvah through her husband’s performance. Following the Pri Megadim, he applies the Gemara’s concept of ishto k’gufo , the concept of a wife being seen as an extension of her husband,(see, for example, Berachot 24a and Bechorot 35b).  Interestingly, this principle is applied in the Gemara to situations of personal status (can one spouse fulfill a vow made by the other).  The application of the principle to apply to fulfillment of mitzvot represents a step beyond the Gemara’s use of the principle.

The extension of this principle by the Mishnah Berurah should motivate us to examine the significance of the application of ishto k’gufo, not only to the performance of mitzvot but more broadly as well.  As women, should we embrace the moments of our own personal obligations?  (When it comes to Chanukah candles the Gemara states quite clearly that women are obligated; the question here is simply whether a married woman fulfills her obligation through her husband.)  Should we be finding our own individual paths toward fulfillment in life?  Or does such seeking threaten the ultimate bond between husband and wife – the bond expressed in principles like that of ishto k’gufo?

When people unite for any type of goal, a certain level of personal autonomy is always sacrificed. The group must find and emphasize commonalities and formulate a vision based on those common goals.  In the case of the ideal marriage, a couple works toward formulating a shared a set of values that they communicate, with much help from God, to their children.  When couples differ over any number of those values, compromise sometimes requires the sacrifice of one’s individual inclinations for the greater good of the family.   Nevertheless, as in any true collaboration, each member of a couple should be seen as an individual.

Each distinct personality must be celebrated.  The strengths of each member must have room to flourish.  And the dreams and interests of each individual should be recognized.  Not just because every human being deserves this, but because the partnership, the family unit, and the marriage benefit from it.

The concept of pirsumei nisa applies not only to the lighting of Chanukah candles but also to the reading of Megillah and to the four cups of wine on the seder night as well.  With regard to all of those mitzvot, not only are men obligated but so are women and children.  Pirsumei Nisa is about increasing and “publicizing” the miracle by having everyone in the community participate in the mitzvah.  In order for the miracle to be experienced to the fullest, every person – man, woman, and child – must be a part of it.   This is partially because for any partnership to flourish, alongside the development of a united voice, the individual voices must be preserved and appreciated.  Even women who choose to follow the simple reading of the Mishnah Berurah and to fulfill their mitzvah through the principle of ishto k’gufo must not forget that they too are obligated in the mitzvah.   That for some the mitzvah is fulfilled most ideally when husband and wife fulfill the mitzvah as a unit cannot negate each individual’s obligation.  And regardless of whether in a given scenario husband and wife function separately or as a unit, both are important.   A couple thrives when two thriving individuals are able to thrive additionally as a combined unit.

I came across a blog written in TheYeshivaWorld.com, claiming that, in the last years of her life, Rebbetzin Kanievsky began lighting her own Chanuka candles .  She lit the Chanukiyah that had been in her husband’s family for many years, since her husband now uses one that was given to him as a gift.  Rav Kaneivsky didn’t want to give up lighting his family Chanukiyah, so his wife did it for him.  What a fascinating and inspiring application of ishto k’gufo.  She performed the mitzvah on her own rather than through her husband, and yet through that act they were united as couple – helping each other fulfill the mitzvah in the most ideal fashion.  Every human being is created in God’s image.  And every human being – man or woman – realizes that image partially through self fulfillment, through taking his or her God-given talents and maximizing them as an individual.  When each member of a couple finds individual self-fulfillment, they are then better positioned to thrive as extensions of one another.

About the Author
Lisa Septimus is a Yoetzet Halacha for a consortium of synagogues in Manhattan and of the Five Towns. A graduate of Stern College’s Graduate Program for Advanced Talmudic Studies, she subsequently served as the program’s shoelet u’meishiva. She teaches Talmud, Chumash, and Ethics at North Shore Hebrew Academy High School in Great Neck, NY, where she also coordinates informal education programs and serves as Dean of the Class of 2016. In her active role as rebbetzin at the Young Israel of North Woodmere (NY) she is integrally involved with adult education and youth programming. She has taught at The Jewish Center in Manhattan, Riverdale Jewish Center, Drisha, and Yeshiva University’s Summer Learning Program. She and her husband, Rabbi Yehuda Septimus, are the parents of four young children.
Related Topics
Related Posts
Comments