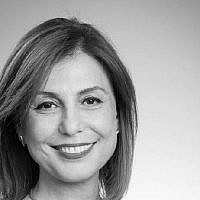 The Blogs
Maty Zwaig
Apply for a Blog
Please note that the posts on The Blogs are contributed by third parties. The opinions, facts and any media content in them are presented solely by the authors, and neither The Times of Israel nor its partners assume any responsibility for them. Please contact us in case of abuse. In case of abuse,
Report this post.

When wondering why women account for only one-third of high-tech employees in Israel, with only 20% of them in technological roles, look for the answer long before their joining the workforce. The choices we make at a young age shape our lives as adults. Often, however, these are not really our choices. Whether we are aware of them or not, many career decisions are taken based on social “tracking” and cultural and family influences. They shape the professional future and the doors that would open up in one’s career for the young women who made them in the decision junctions of their lives. These wrong decisions leave women with a smaller gamut of choices and opportunities.

Men constitute the absolute majority in the high-tech engine that has been pulling the Israeli economy for years. While the awareness of the imbalance is present in the media and the educational discourse, the small numbers of women in technological academic tracks and the innovation industry remain stagnated. The human capital report published recently by Start-Up Central and the Israel Innovation Authority shows this stagnation has plagued women’s entrance to the high-tech industry for the past seven years.

Teenagers face their critical decision junction when they choose their high-school major. Many girls opt for non-technological majors because they underestimate their technological skills, the need to belong to a less “geeky” peer group, and biased perception of computers as demanding and dull. A host of researches has shown parents and teachers alike are more forgiving towards girls who give up tech-oriented subjects than they would with boys, who are encouraged to pursue technological tracks even with lower grades.

The situation exacerbates when the girls reach the second decision junction of choosing their military service track. Many of them define themselves as “non-technological,” ruling out service in technological units even if no computer science background is necessary to apply. The sad outcome is that only one-third of IDF developers are women. In the intelligence corps, for example, a powerful springboard to the high-tech industry, only 20% of soldiers serving in computer-related professions are women. While we cannot expect the military to correct all the ailments of the Israeli educational system and society, IDF could modify the recruitment and screening to prevent gender bias.

The third decision junction that warrants attention is the choice of an academic track. Women who opted out of science tracks in high school tend to exclude themselves from academic technological paths even if they have the necessary credentials for admission. Intervention programs undertaken by  Scale-Up Velocity by Start-Up Nation Central showed targeted discussions of double-major tracks that combine computer science with another subject, and meetings with women whose careers are a model for emulation have motivated 25% of the participants to choose high-tech majors even though they had not considered it earlier.

International Women’s Day which was just celebrated in Israel and around the world, provides another opportunity to consider the distorted picture that has been with us for years. Is Israel doing enough to encourage our girls to make smart decisions that would open up opportunities to develop a career in Israel’s fastest-growing and profitable industry? None of this will happen if we continue to treat girls and boys as we do today and expect the girls to beat the stigmas. Alongside the education system, the military, and the academia, which must adjust their processes to encourage girls and young women to choose science and technology, it is also our duty – parents, siblings, educators and commanders – to adopt a different discourse with girls and teens. We ought to inspire them to make well-considered decisions and embrace the technological language as a tool that would allow them to leave their mark and shape an egalitarian future for all of us.

The glass ceiling is not an issue that only women need to deal with. The Israeli high tech and the entire economy must smash the glass ceiling since women’s absence from the industry jeopardizes growth and innovation, undermining Israel’s economic and social strength.

About the Author
As CEO Maty brings her vast experience in digital technologies and management to Scale Up Velocity. Before joining Scale-Up, Maty was the VP of Digital & Technologies at Ness. There she led the company’s Digital and R&D division, managing a unit of over 200 employees on large-scale projects. Maty arrived at Ness after eight years at IBM where she managed the Software and Infrastructure Development Groups. Maty holds a B.Sc in Mathematics and Computer Science from Tel Aviv University. Maty serves in the IDF reserves as a lieutenant colonel. During her active service she led the intelligence corps R&D units.
Related Topics
Related Posts
Comments