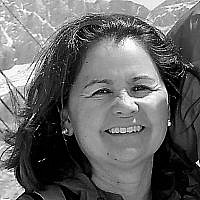 The Blogs
Jean Campaiola
Apply for a Blog
Please note that the posts on The Blogs are contributed by third parties. The opinions, facts and any media content in them are presented solely by the authors, and neither The Times of Israel nor its partners assume any responsibility for them. Please contact us in case of abuse. In case of abuse,
Report this post.

The obvious reason is that it is a fun movie. But my second thumb is up because I found Jewish themes running through it, and not simply because the star is Israeli actress Gal Gadot. By the end, I was thinking of the real life heroines and heroes who safeguard Israel everyday.

So even if a comic book story is not exactly your thing, bear with me and see if these ideas resonate for you.

Wonder Woman is a character in the DC comics stable, much like Batman & Superman. Her backstory comes from Greek mythology: she is Princess Diana, daughter of the Queen of the Amazons. Zeus created the Amazons to defeat the god of war and restore peace to the world. It is a kind of kabbalistic idea ~ the special people created by G-d, to repair the broken world.

So Diana is raised on an island of Amazon women, and is cherished by her mother, the Queen. She is a spunky, curious child, who desperately wants to be instructed in combat, but her mother forbids this, fearing for the child’s safety.

Circumstances, of course, compel her to fight. As she leaves home, she says to her mother (imagine these lines spoken with a distinctively Israeli accent) “I cannot stand by while innocent lives are lost. I’m willing to fight for those who cannot fight for themselves. Who will I be if I stay home?”

Do not stand idly by while another’s blood is spilled. Protect the orphan, the stranger, the widow. If I am only for myself who am I? Sound familiar? Are the screenwriters aware these ideas go back to Torah and Talmud?

Throughout the movie, Diana repeats that her sacred duty is to kill Ares and rid the world of war. You can hear an echo of the Biblical commandment to King Saul to rid the world of Amelek. We cannot know how history might have been different if Saul had done so, but it remains a commandment to remember Amelek and what he did to the Jewish people.

The movie is set during World War I. Though Diana is on the side of the Allies, she is also fighting British appeasement. Her companion has developed a bold plan to save thousands of lives, but a pompous British general vetoes the plan, meaning innocents will likely die. Diana upbraids him: “Where I come from Generals don’t hide in their offices! They die on the battlefield!”

Indeed.  Where she comes from ~ Rosh Ha’ayin ~ is in central Israel. Israeli actress Gal Gadot, in addition to being Miss Israel of 2004, served in the IDF for 2 years as a combat trainer. It is fairly obvious when you see her athleticism and intensity on the big screen.

This is probably not true for most American moviegoers, but for me, her words have special impact because the place where she comes from is of course Israel. Further, the generals she knows lead the most moral fighting force in the world, the Israel Defense Forces. This army, as we know, is a defense force, not an army of conquest. Their mission is to protect the people of Israel, and all innocents. They do not seek war, but are prepared for it. Their code of ethics is derived from our holy teachings.

So with these Jewish themes, spoken in this uniquely Israeli accent knocking around in my head, I could not help but think of the real wonder women of our day, those who desire peace, but are called upon to defend their people.

Specifically I remember Hadas Malka. She was the 23 year old Border Patrol Guard who was killed by a Palestinian terrorist while guarding the Damascus Gate on June 16, 2017. Many of us have passed by guards like Hadas as we enter the Old City to pray at Judaism’s most holy site, the Kotel. We have seen the sweet photo she took of herself and sent to her family and friends moments before she was murdered. “Shabbat Shalom to my loving friends,” she texted on her last Friday afternoon.

The you tube video of her funeral on Mount Herzl shows thousands of mourners. The eulogies by her father David and her younger sister Shaked are heartbreaking. They mourn a beloved daughter and an adored big sister. But she was a warrior too. Hadas had already completed her military service in the Navy, yet she went through combat training to become a member of the Border Police specifically to help protect Jerusalem. One of her friends told a TV reporter exactly what I was thinking, “She was a real life Wonder Woman.”

Only without the superpowers. When 3 Palestinian terrorists from the West Bank carried out an attack with machine guns, pipe bombs and knives, Hadas didn’t have a magic sword, shield or those shiny arm guards to deflect their bullets and blades. She fought with her murderer as he stabbed her in the neck, and she later died at Hadassah Hospital.

Since the 1990s when women first began serving in combat with the Border Police, there was one all-female company called Hanit (Spear). That company’s name was later changed to Hadar, in honor of Border Police Cpl. Hadar Cohen, who was killed at age 19 in February 2016 fighting terrorists at that same Damascus Gate in Jerusalem.

When Hadar Cohen was killed just last year, Hadas Malka posted on Facebook: “We are all Border Patrol. In memory of the warrior heroine Hadar Cohen.” It is overwhelmingly sad to read this post knowing Hadas would give her life too, in the very same way, just over one year later. You may look it up on Facebook, her family has left her page up to preserve her memory.

The Israeli papers say that applications to the Border Patrol are up and surpass applications for even the elite units and paratroopers brigade. Young Israelis compete for the privilege of doing the dangerous job that Hadas Malka & Hadar Cohen did.

These wonderful women, and men, deserve our deepest respect for their service. Because Israeli women serve as the men do, in virtually every role, including fighter pilot and combat soldier, maybe little Israeli girls don’t need movie superheroes like we Americans do to inspire courage, strength and sacrifice. Maybe they grow up with wonder women around them all the time and it is only natural for the best of them to compete for the dangerous duty of protecting their people.

So by all means, see the movie. Enjoy an escapist summer fantasy, and tell me if you feel the Jewish themes too. But most importantly, honor and pray for the safety of those wonderful men and women who see it as their sacred duty to protect Israel, even if it means they must pay with their lives. They are truly the wonder of our people. And for those like Hadas and Hadar who have fallen, may their memories be for a blessing.

About the Author
Jean is a retired psychiatrist living in Raleigh, North Carolina and Ft. Myers, Florida. She is originally from Massachusetts.
Related Topics
Related Posts
Comments