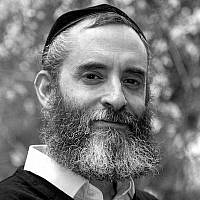 The Blogs
Tani Burton
Apply for a Blog
Advertisement
Please note that the posts on The Blogs are contributed by third parties. The opinions, facts and any media content in them are presented solely by the authors, and neither The Times of Israel nor its partners assume any responsibility for them. Please contact us in case of abuse. In case of abuse,
Report this post. 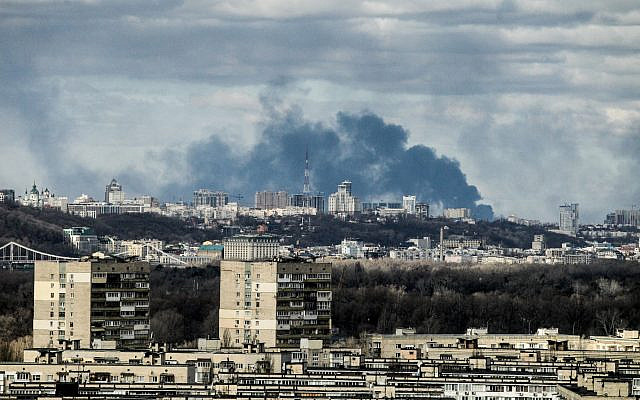 KYIV, UKRAINE - FEBRUARY 27, 2022 - Smoke rises over the part of Ukraine's capital situated on the right bank of the Dnipro River in the morning on Sunday, Kyiv, capital of Ukraine. — Photo by Ukrinform

People have taken cover and have slept in subway stations. They have watched their surroundings be blown to smithereens, reduced to rubble by relentless shelling that does not discriminate between military and civilian targets, between the army base, the kindergarten or the hospital. Russian troops have encircled their largest cities. For days, a 40-mile-long convoy of death has stretched out towards Kyiv. Assassination teams have come for the democratically-elected president of Ukraine, Volodymyr Zelensky. Some of these came from a mercenary group called Wagner, others would-be jihadists from Chechnya serving a “warlord” who is loyal to Putin.

President Zelensky shelters in a bunker, asking for help from the civilized world, asking for ammunition, a no-fly zone, military aid so that the invasion can be stopped.

I am not a politician, a military strategist or a diplomat. I lay no claim to expertise in these fields and cannot comprehend the complexity and nuance that might exist at the level of people who need to make policies or military decisions. I belong to the great mass of humanity that does not have a political post nor a commission in any army. Many of us, astonished and enraged at the carnage, feel powerless to do anything but watch this tragedy unfold.

We are enraged, but can’t simply march on foot to Kyiv to stand with the residents and the soldiers of the city as they defend themselves from soldiers of a foreign army that have been sent there to kill them. We can donate money to charity organizations; we can write supportive Twitter tweets and disgruntled-sounding Substack articles; we can pray for the welfare of the Ukrainians and for peace.

And we can write. Here goes:

I believe that above and beyond the human tragedy and material cost of this war crime being committed by the president of the Russian Federation is the existential tragedy that we are creating for ourselves, which is going to haunt us all for the rest of our lives. We are witnessing the largest land war in Europe since World War II. Many of us find it hard to conceive that humanity could revert to such a disgraceful state after a century’s worth of work in the development of international law, peacekeeping, diplomacy, treaties and conventions intended to prevent these things from ever happening again.

Several elements make the current moment particularly harrowing. Over a hundred million people were killed in wars during the 20th century, with technology that was much cruder than the equipment being deployed as we speak. In addition to cluster bombs, ballistic and GRAD missiles that are being used indiscriminately in civilian areas, Russia has brought the TOS-1 heavy flamethrower system to the Ukraine, as documented a few days ago by a CNN camera crew.

The TOS-1 can launch thermobaric, or “vacuum” warheads, which bring a devastating impact, an explosive cloud of material, and finally a pressure wave that will rupture the lungs of anyone in the vicinity who was not immediately vaporized by the blast — and of course, tear buildings apart. These devastating weapons have been tested by the Russian military on Chechen fighters during the War of Grozny, in Afghanistan, and on the Syrian population, as part of Putin’s support for the regime of Bashar Assad during the Syrian civil war. Russia’s frequent involvement in military conflicts makes for readily available quality assurance testing on vulnerable humans, which seems to leave no dent on the consciences of their leadership. The TOS-1 is merely one of many weapons of mass destruction at their disposal.  Last year, during a visit to the Rostvertol helicopter factory in Rostov-on-Don, Russian Russian Defense Minister Sergei Shoigu boasted that 320 types of weapons have been tested in Syria.

When these systems are used, the grit and determination of the Ukrainian people, who have demonstrated their worth on the field against the Russians with very limited means of defense, will probably not be enough. The lopsidedness of the fight will become more apparent.

The existential tragedy is generated by the people and entities in the world who do actually wield the power to end this war, especially the governmental and military officials of the United States and NATO.

NATO is a defensive alliance of 30 countries, with 3,317,000 armed forces personnel. It completely dwarfs the armed forces of the Russian Federation, which totals 1.5 million people, itself five times larger than the Ukrainian military. As a geographic entity, NATO stretches from North America and all the way across Europe and sits literally next to Ukraine. I cannot give an accurate figure as to how long it would take NATO to end the war, but I am sure that the actual number of hours or says is a finite number.

For nine days, a population of 44 million people have been under attack by an invading army from land, sea and air. Everyone living in the Ukraine is vulnerable to being brutally killed in war, right now. The governments of the world have provided humanitarian and some military aid, but never committing themselves to the actual defense of Ukraine against Russian invasion. Israel, by the way, has served no better. NATO has not admitted Ukraine to its ranks, and therefore its leadership exempts themselves from military involvement. Despite pleas for a no-fly zone, or military assistance, neither the United States nor NATO will provide it.

President Joe Biden stated “Let me be clear, our forces are not engaged and will not engage in conflict with Russian forces in Ukraine.” UK Prime Minister Boris Johnson articulated it as such, “When it comes to a no-fly zone… in the skies above Ukraine, we have to accept the reality that, that involves shooting down Russian planes,” Mr. Johnson said. “That is a very, very big step that is simply not on the agenda of any NATO country.” And Jens Stoltenberg, the Secretary-General of NATO, “We have no intention of entering Ukraine by land or air.”

There is nothing to stop the bombing of Ukraine from the skies, because the AIRCOM forces of NATO, which sit there on the tarmac at the Ramstein Base in Germany, have not been given the order. And because no one will lend a hand in the defense of Ukraine, there is little to check the advance of an overwhelming armed Russian force on the ground. The Ukrainians are being left to die before our eyes, while the leaders of what was known as the free world offer sympathetic glances and supportive-sounding sound bytes, and celebrate the “global outrage” they have been able to invoke in various halls of assembly.

The vaunted sanctions imposed by the US and EU target a mere seven out of hundreds of Russian banks, do not affect their energy sector at all, and do not apply to Putin or his oligarchs. Yet they are being falsely characterized with the same level of lethal power as an atomic bomb; their implementation accorded the same level of valor as Iwo Jima. These are economic measures that are intended to “make Putin pay,” but do not detract one cent from his assets, which are estimated at 200 billion dollars. The sanctions will take a month to truly impact the Russian economy and then will likely have the curious effect of starving out innocent Russian citizens, many of whom who have protested the war and filed past the Ukrainian embassy in Moscow with pleas for forgiveness.

And sanctions do nothing to protect the people of Ukraine from being killed en masse now.

How is it possible that we can delude ourselves into believing that we have upheld the value of sanctity of life while being uninvolved in the defense of people who are under attack?

It occurred to me, when there was a report of a missile striking the site of Babyn Yar, that perhaps we have reached the expiration date beyond which the horror and inhumanity of the Holocaust will no longer impact the collective human consciousness. Moreover, we may have come to a point where the experience of holocaust can not be said to be unique, for while we as Jews have carried the experience of the “six million” for nearly a century, there is now another population, this time 44 million in size, that appears marked for that level of destruction.

And the most powerful people in the world, with the capacity to do something, just sit there and watch.

The existential tragedy is the experience of a world that whose values seem to have been trampled out of consciousness, where the voice of conscience speaks but is unheard. Where precepts like, “do not stand idly by your brother’s blood” have been supplanted by concerns about what Putin might do next, or higher gasoline prices. Or World War III. Or something. Good Lord, if someone was coming after your family member, would you just let them, or would you put yourself at risk to deliver them? Based on what we see today, Taiwan should ready itself for an invasion by China, and Israel should fully expect to pre-emptively have to destroy Iranian nuclear weapons in the immediate term, because the international community has shown that there is no real price to pay for aggression, and that the “Genovese effect” is the most prominent value in the world.

When it comes to protecting life, specifically of the Ukrainians under assault, it is clear that a military solution is the only solution now. Humanity can not permit one sociopath to be more powerful than all of our values combined. Those who heretofore have restrained themselves out of the fear of Putin–to name the country which is responsible for this horror, to send Ukraine military aid, to join the very fight itself against the Russian onslaught — must cast aside this unconscionable spinelessness for once and for all. Yes, it may invite a further escalation in conflict, threats of nuclear weapons, and who knows what. But it is better that we suffer and risk our lives doing that which is right, that which needs to be done, that which requires bravery and clarity of values, than that we spend the next century building memorial museums, our hands covered in innocent blood, horrified by our inability to act when that was called for.

About the Author
Tani Burton is a practicing psychotherapist, hypnotherapist, existential analyst and educator with over two decades of clinical experience, working with individuals, couples and families to help them find meaning in their lives and take responsibility for real, positive and healthy change. In addition to his private work, he is a lecturer at the PATH Institute in Jerusalem.
Related Topics
Related Posts
Comments