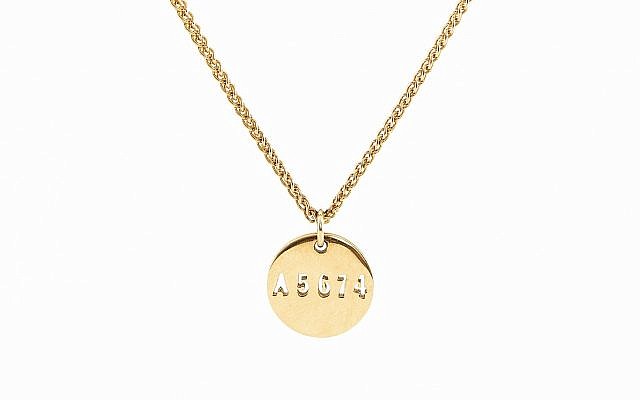 So while y’all were discussing the Nation-State Law, Peter Beinart’s detention at Ben-Gurion International, and the Petition to Stop Incitement Against Sarah Tuttle-Singer, we 2Gs and 3Gs – children and grandchildren of Holocaust survivors – were up all night again debating this:

Dana Rogozinski’s Jakob and Ella Legacy Collection, a jewelry line featuring, among other things, the tattooed ID numbers of Holocaust survivors to be worn by their offspring. What began as Rogozinski’s pendant honoring her grandmother Ella Lucak Rogozinski (who like my mother survived Auschwitz and Bergen-Belsen), morphed into a business in which people could order “Nana’s number” to wear as a bracelet or a necklace.

Julie L. Sagoskin’s recent piece for the Forward The Jewelry Brand Making Necklaces Out of Concentration Camp Numbers sparked this newly gut-wrenching round of posts on 2G and 3G forums, ranging from simply “NO!” to my own, “My parents did not have numbers. But I think that I would not want to adopt a Nazi method to reduce everything that they are.”

Some argued that it is infinitely better than the popular among Israeli 3Gs’ practice of tattooing grandparents’ numbers on their own arms, because it does not violate the halachic prohibition against tattoos.

And I expressed my understanding of a 3G’s desire to take that personal symbol forward to a time when their grandparents’ experience could be played down or forgotten:

“It’s like they’re saying, ‘Ask me about my grandparents.'”

(Ask me about my lack of grandparents. Ask my kids what family “vacations” in the States are really like. Ask us all how we put the fun back in dysfunctional. But only if you are really prepared to listen.)

Emily Wanderer Cohen argued that money made from the Holocaust may be an investment in keeping the stories and memories of our loved ones alive, asking, “How much is that worth?”

While some 2Gs and 3Gs feared copy-cat attempts to exploit the Holocaust by posers, like those who have written entire memoirs of a Holocaust which they did not experience. We are for obvious reasons a very insular and self-protective club and I feel their fear.

We are unquestionably more entitled and more equipped than anyone other than survivors to weigh in on how to preserve our parents and grandparents legacy. And needless to say, whether this discussion is purely ours is a hot-button issue among my fellow 2Gs and 3Gs. But this is not only our discussion to have – it belongs to the broader circle of all Jews (and indeed all caring humans) who unfortunately share this legacy and the obligation to preserve the memories of the Holocaust. It is in the spirit of what I believe to be a shared legacy that I am opening this discussion to a greater audience.

Here’s the thing: It was apparently not long before Rogozinski began to receive seemingly innocent orders for the ID numbers of survivors who did not live to reproduce in an alleged effort to commemorate them. Let me tell you that the slippery slope that this revelation embodies sent my little epigenetic PTSDed heart into a mini panic attack. What’s to keep nefarious forces from laying claim to someone’s number? To what extent does Rogozinski vet those who put in orders? What happens when the business plan does not account for alt-Right attempts to own someone’s grandmother?

Who has the right to sell Rogozinski the numbers of the Holocaust survivors whose memories have been orphaned? The Poles? The Germans? Yad Vashem? Where does that money go?

My utterly uncertain bottom line: This makes me extremely uncomfortable. But if we are to preserve the collective experience and memories of our loved ones for future generations who have no personal memories of a beloved parent or grandparent, we may have to stomach this and more. For 2Gs and 3Gs who have to live this and so much more on a daily basis, Holocaust jewelry is a relative walk in the park. If it means that one of my great-great grandchildren or anyone else’s internalize the real message of #neveragain, so be it.

Note to the guy who trolls me by asking, “Are all your blogs about the Holocaust?”: Don’t ask again or I’ll sic my fellow 2Gs and 3Gs on you. If you think hell has no wrath like a woman scorned – you haven’t seen the wrath of two or more 2Gs and 2Gs.

About the Author
Varda Spiegel was Nurse-Director of the Bedouin Mobile Unit of the Negev, later serving as Maternal-Child Health Director for the Ministry of Health Jerusalem District. I was the English Web Content Manager for the Israel Museum and have translated from Hebrew to English for Haaretz and the ANU Museum of the Jewish People. I'm a grandmother, mother, and beachbum.
Comments