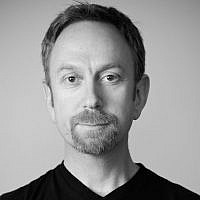 The Blogs
Aaron Davidman
Apply for a Blog
Advertisement
Please note that the posts on The Blogs are contributed by third parties. The opinions, facts and any media content in them are presented solely by the authors, and neither The Times of Israel nor its partners assume any responsibility for them. Please contact us in case of abuse. In case of abuse,
Report this post.

No, it’s Iran
It’s all about Iran

——
This is the opening to my play Wrestling Jerusalem, a solo performance about the Israeli/Palestinian conflict in which I play 17 different characters covering a wide spectrum of political, social and religious perspectives. The play premiered at Intersection for the Arts in San Francisco in March 2014 and is now touring throughout the U.S. and is being made into a feature film.

We usually host conversations following the performance where audiences reflect on their experience of the play. These conversations are profound. People in the U.S. are desperate to talk about the issues in an environment that will allow them to go beyond polemic. The play is about many things, but one central theme is listening. We are living in a such a polarized world and here is a play where audiences are not asked to pick a side, but rather to sit back and absorb the profound complexity and nuance that lives deep inside this conflict. They are asked to engage with human beings who may have perspectives different from their own.

Wrestling Jerusalem presents characters from the U.S., Israel, and the West Bank, who each have a very real stake in the conflict. Audience response is immediate. 5 minutes after the play is over, we gather. People are often moved and tongue-tied at first. Much to digest. A Jewish man listens as a Muslim woman describes what resonated for her. It’s eye opening. A Christian woman listens to a Jewish woman share her experience. Again, eye opening. A woman on the Left listens to a man on the Right. It’s a softer, more considered conversation than the one we are usually having in the public arena. My creative team and I have created an artistic event where audiences bear witness to the experience of the “other”, both while watching the play and in the conversation that follows. We need to talk to each other, we need to try to understand each other, even if we can’t agree with each other on solutions. It’s a vital step in the process that will lead to the end of bloodshed. We’re all complicated.

About the Author
Aaron Davidman is a writer, actor and director. He is drawn to stories of ethnic history and cultural complexity that challenge our assumptions of the “other”. Aaron served as Artistic Director of Traveling Jewish Theatre in San Francisco from 2002-2011. His play WRESTLING JERUSALEM, a solo performance about the Israel/Palestine story, is touring throughout the U.S. and is being made into a feature film. Aaron received his theatrical training at Carnegie Mellon University, earned a BA from the University of Michigan and an MFA in creative writing/playwriting from San Francisco State University.
Comments