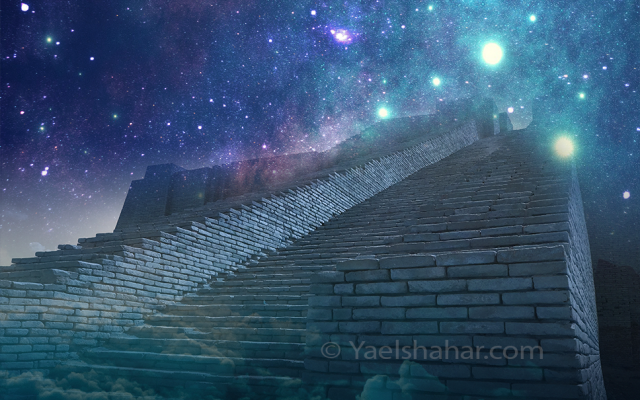 The story of Yaakov’s dream dialogues with a very different story. Recall that earlier in the Torah, we are told how men set out to “make a name” for themselves. They would build a city and a tower—a  ziggurat—with its top in the heavens. In ancient Sumeria, such structures served as observatories, used to glean useful knowledge of the seasons, and bogus knowledge from astrology. It was the way of such secret knowledge to remain the property of the elite, the “men of name”, who would use it to reinforce their power over those not in the know. Similarly, the tower builders aimed to wrest the secrets of the heavens. The name of this notorious city was Bab-El, the Gateway of God.

But the true encounter cannot be forced. Yaakov’s vision comes to him when he is at his most vulnerable—alone, at night, in a strange place, far from home and fleeing his brother, asleep and helpless to defend himself even against dreams.

This is the place from which Yaakov will henceforth encounter the God of his Fathers. His next contact with God will be when he is desperate to extricate himself from a position of near slavery with his father-in-law, Lavan. And again, when he is left alone at the Yabbok crossing, then too, at night. And once more when he faces the possibility of war, his sons having carried out a massacre at Sh’chem, defiling everything that Yaakov has struggled to achieve and preserve of his grandfather Avraham’s ways. And last of all, when Yaakov faces the uncertain future in Egypt, on the cusp of history, between a free family and an enslaved nation. Always on the cusp. Always in-between.

Yaakov encounters God in a state of vulnerability, a state of uncertainty, because it is uncertainty that clears the way for us to accept the miracle of the encounter. While the tower builders constituted a single unified society bent on wresting the secrets of the heavens, Yaakov is one man, alone in a stony land, suspended between a painful past and an uncertain future.

And so, with a stone for a pillow, Yaakov dreams of a sulam—a staircase or ziggurat, the term could mean either—between heaven and earth. He sees the messengers of God traversing the chasm, linking the transcendent heavens with the solid earth.

And God standing over it. Or over him. Again, the term is ambiguous. Is God far away, at the top of the structure, in heaven? Or is He nearby, standing over Yaakov’s sleeping form. Remote and transcendent? Or nearby and immanent? We struggle to bridge the gap, uncertain of what it is we see.

Upon awakening, Yaakov is moved to say, “How awesome is this place! This is none other than the abode of God, and that is the gateway to heaven.”

The gateway to heaven leads through doubt, uncertainty, and utmost vulnerability. Is it any wonder then, that the tower builders failed in their attempts to build a “Gateway of God”? Their strength was their weakness. United in their goal, they had disparate reasons and longings. In the end, their unity was revealed to be an illusion by the fragmentation of language.

“Every word that issued from the mouth of the Almighty [at Sinai] was fragmented into seventy languages,” says Rabbi Yochanan. (B. Shabbat 88b) Why seventy languages? Because each language represents a unique point of view, a worldview different from all others.[1] Absolute truth is unreachable by any one human mind. Every human being represents but one aspect of this greater truth, and only in combination can these fragmented truths approach a greater whole. Only the combined weight of all human truths can approach the one divine truth. Thus the seventy languages of humanity are met by the One voice of God.

But the corollary is that anyone who relies on one opinion only—his own or someone else’s—and believes that he has the whole truth in his hands is arrogating to himself a position of divine knowledge. Reliance on a false truth is bad enough; believing that the false truth is absolute is far worse. Or, in the words of modern philosopher of science:

The characteristic of all fundamentalism is that it has found absolute certainty…a certainty of the person who has finally found a solid rock to stand upon which, unlike other rocks, is “solid all the way down.” Fundamentalism, however is a terminal form of human consciousness in which development is stopped, eliminating the uncertainty and risk that real growth entails.”[2]

The tower builders were shown the impossibility of approaching God via a single unified viewpoint. Their certainties were replaced by the vulnerability of fragmented knowledge. But, really, they were merely shown the true nature of all human knowledge. Truth (capital T) is in heaven, and is the domain of the transcendent; human truth is immanent, bound to the created world. For this reason, the Talmud glorifies competing views as facets of an overall truth, which can only be approached via the inclusions of opposite viewpoints. “These and these are the words of the living God”—not one or the other, but the combination of both.

The dreaming Yaakov, resting on the rock of uncertainty, discovers a deep truth. His vision comes at a liminal time, between home and the unknown, between hope and danger, between night and day. And so it comes as no surprise that his is a liminal vision, between immanent and transcendent. For this is precisely what “kedusha” (holiness) is; it is the interface between the transcendent God and the immanent manifestation of the divine in the created world. Thus, Yaakov encounters God in that liminal state of neither here nor there, bereft of the comforts of home, family, and even name.

It is on the rocky road of risk and uncertainty that we encounter God, between the immanent and the transcendent.