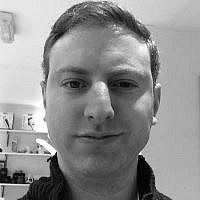 The Blogs
David-Yehuda Stern
Apply for a Blog
Please note that the posts on The Blogs are contributed by third parties. The opinions, facts and any media content in them are presented solely by the authors, and neither The Times of Israel nor its partners assume any responsibility for them. Please contact us in case of abuse. In case of abuse,
Report this post.

On top a mountain, adjacent to a forest and overlooking the beautiful hills of Jerusalem stands the campus of The World Holocaust Remembrance Centre – Yad Vashem.

It is the second most visited site in Israel welcoming around one million people a year to its Research, Archiving and Education Centres, Memorials and Museum.

Here, myself and twenty other London-based educators spent a week grappling with the challenges associated with the Holocaust and Jewish Identity.

In our first session the seminar leader instructed us to close our eyes and asked us to describe the images that came to mind when we thought of the Holocaust.

For most of the group, the dominant image was that of gaunt figures wearing striped rags, leaning against fences lined with barbed wire. In our minds these people were nameless, devoid of identity. Yad Vashem wants to change this!

A key tenet of Yad Vashem’s work is to celebrate the lives of the victims and the Jewish communities that existed before the War. The driving force behind this is the re-humanisation of those whose lives were destroyed by the Holocaust.

From the powerful Yiddish plays of I.L. Peretz to the insightful realist paintings of Maurycy Gottlieb; from the wealth of newspapers, poetry, and folk songs of the Jews in Salonika, Greece to the rich political life as exemplified by parties such as the Zionists and the Bund across Poland.

In fact, it is through talking about this thriving tapestry of prewar European Jewish life that we are able to bring meaning and identity — to restore the humanity — to this lost world.

All modern Jewish Communities must wrestle with the complex task of placing the Shoah within the much broader landscape of Jewish life. Yad Vashem places the human being at the centre and emphasises that, “The story of the Holocaust is first and foremost a human story.”

Perhaps this approach provides a good model of how we can balance commemorating the Holocaust with celebrating Jewish identity.

As the Holocaust shifts from memory to history, not only must we learn about the acts of the perpetrators, we must also ensure that the individual lives of pre-War Jews are also celebrated.

About the Author
David-Yehuda is the Head of Youth at New London Synagogue. He has a degree in Film and Television Studies, and is currently pursuing an MA in Jewish Education at the London School of Jewish Studies.
Related Topics
Related Posts
Comments