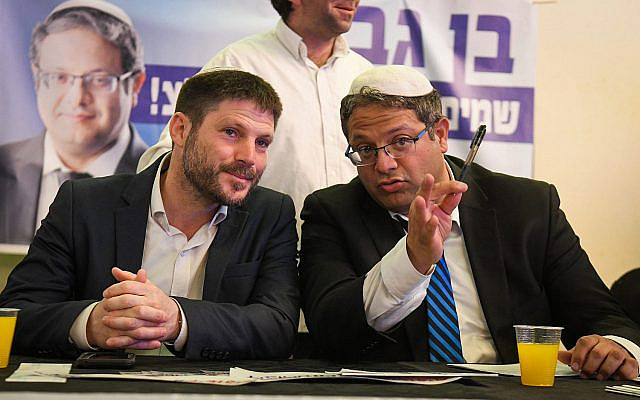 “The incoming leaders of the Religious Zionist Party are reputed not to reflect the ethos of Orthodox tradition I recognize and love. To be clear, it’s not that I can’t make textual arguments from biblical or Talmudic literature to support a homophobic, Xenophobic, and dare I say, racist positions. Nor are the views of some politicians a complete historical anomaly. It would be dishonest to say otherwise. The texts are there. Some embarrassing information appears in history books. But I believe these elements do not lie at the heart of Torah. Every traditional Jew confronts various sources and authorities and must choose which aspects of the past to emulate and which leaders to follow. Which should dominate and which others should play a minor role ultimately defines how a Jew, and any religious person, sees the will of God.

“We are given a choice on how to read our tradition… I chose the Torah of Rav [Yaakov] Meckleberg and Rav [Shimson Raphael] Hirsch… Racial elitism seems to be in opposition to what many rabbis and theologians believed was the goal of Torah. There is no room for xenophobia or racism in Judaism. This is the path of my many teachers, such as Rabbi Aharon Lichtenstein and Rabbi Yehuda Amital.”

Rav Berman’s alternative is nothing new, it is the same Modern Orthodoxy created by Rav Hirsch, developed by Rav Joseph B. Soloveitchik (whom Rav Berman references later in the article), and imported into Israel by Rav Amital and Rav Lichtenstein. Its differences with the Torah of Maran Rav Avraham Yitzhak HaKohen Kook and his students, what is often called “religious Zionism,” are clear and well established, key to understanding Rav Berman’s misunderstandings of the latter and anger and its success. Most importantly understanding these two energies is critical for charting the path forward.

The core philosophical point of deviation between Rav Hirsch and Rav Kook, and their respective students, is the purpose of Galut (exile/diaspora). For Rav Kook, Galut is a terrible curse, a punishment equal to all punishments, a hillul Hashem (desecration of the Creator), but a necessary purification for Israel from its late-Second Temple period dysfunction so that it can achieve Geulah (liberation/redemption). In Orot m’Ofel: Eretz Yisrael 3, Rav Kook likens the People of Israel to a ritually impure Jew who must cut himself off from Israel until the impurity is cleansed. The purpose of this isolation is to eventually rejoin Israel, just as the purpose of Galut is ultimately Geulah.

Rav Hirsch, however, posited the idea of Galut Lishma, Galut for its own sake. Rav Hirsch, champion of the Austritt movement and Torah im Derekh Eretz philosophy, argued that Jews must come to terms with the reality of Galut as the new natural position of the Jew. Continuing to exist as a people in Galut, as Jews had from the Roman exile to the Enlightenment, showed a lack of faith in this position and a vulnerability to the encroachments of Maskilim. Jews must cease to exist as an independent people with their own national aspirations but rather as individual “Halachic men” within Western societies.

This seemingly minor philosophical gap creates serious ramifications for how students of Rav Hirsch and Rav Kook see themselves and see each other. Followers of Rav Hirsch’s Modern Orthodoxy, seeing Galut as something to embrace, view themselves as Halacha-adhering individuals in Western civilization and Rav Kook’s followers as hyper-nationalist zealots. Devotees of Rav Kook and his Torah, seeing Galut as something to be overcome, view themselves as participants in a unique national story continuous from the Tanakh and followers of Modern Orthodoxy as atomized and Westernized sellouts.

This is the difference that allows Rav Berman to denounce Religious Zionism, its platform, its leaders, and its voters as hateful and bigoted while admitting that their stances are authentic Torah ideas and positions.

Israel is increasingly moving from the epoch of Zionism, a Yosef movement using Western tools to create the material, quantitative basis for a society, to something deeper. Similar to the transition between Kings Shaul and David, Israel’s focus is moving from material survival to the qualitative and unique characteristics of her society.

Rav Berman and others are correct to discern that Religious Zionism is not merely Mizrachi, Mafdal, Meimad, or Yamina with a different face. While those parties may have sought to represent individual Halachic men within Zionism, Religious Zionism provides a Yehuda-inspired alternative; building a holistically Jewish society on the material basis Zionism has created, preserving Zionism’s accomplishments while cleaning up its messes.

This transition is expressed through the incoming coalition. Religious Zionism can be understood as Yehuda with its satellite tribes/parties: Otzmah Yehudit as the nationalist Shimon, Noam as the moralist Levi, Shas and UTJ as the working-and-learning partnership of Issachar and Zevulun. Likud is still Yosef, but a Yosef that understands the necessary transition to the dominance of Yehuda, and this is perhaps more frightening to some than anything else.

The anxiety this transition of power has created is Israel’s new challenge. The forces of Yehuda must fully crystalize a vision for the treatment of others in her society, such as national minorities or dissidents, and global justice, on issues of the environment, human rights abuses, and global health, hunger, and homelessness, that are both true to the Torah and superiorly just to the prevailing wisdom of Western civilization.

Yehuda must establish a place for Yosef in a society it no longer leads. People like Rav Berman who feel connected to the story and values of the West are important to Israel’s future. There is a reason our patriarchs Yitzhak and Yaakov in creating Israel explicitly sought to marry from Nahor’s line, the brother of Avraham who settled in the cosmopolitan center of Aram, adopting Aramian identity while independently maintaining Hebrew adherence; this impulse to engage with the wider world is necessary to Israel. It is understood that Yosef will strike the final blow against Esav (i.e.: Western civilization, Amos 5:6), eventually developing the tools to challenge the West’s monopolistic claim to political and moral justice on the world stage to which it craves engagement.

One may look to Yehoshua for a model of this type of leadership. Yehoshua was a tribesman of Ephraim but a student of Moshe, a Levi. In the Yosef style, Yehoshua sought to uplift Canaanite society and use its material tools to build an Israelite civilization, however, he did so in a way true and grounded in Torah; marrying Rahav (Megilla 14b), offering conditional peace and coexistence to the Canaanites (Yerushalmi Brachot 6:1, Mishneh Torah Milachim U’Milchamot 6:5), and dividing the land into tribal areas and familial inheritances. By grounding his material focus and international engagement in Torah, Yehoshua developed and political and moral doctrine not only worthy of rule but fit to benefit all mankind.

This is the ultimate goal, to benefit all mankind (Yeshayahu 49:6). To this end, Israel must look to the dominant civilizations and build the material structures for survival and growth. This was the Kingship of Shaul, the epoch of Zionism, and the tribal leadership of Yosef. Then, Israel must embrace her unique civilizational character, her values, aspirations, and folkways. This was the Kingship of David, the rise of Religious Zionism, and the transition to Yehuda. Finally, Israel must use its unique character and strengthened position to bring justice to all throughout the world. This is the Kingship of Shlomo, the rebuilding of the Beit HaMikdash, and the fulfillment of all of Israel’s tribal energies under Yehuda’s leadership.

The anxiety expressed by Rav Berman shows how much work is left to be done, the bridges that are yet to be built between Israel’s tribes. History does not move backward; we must progress forward into the next stage of our national story continuing to refine both ourselves and our expectations for each other.

The ways of Torah are both pleasant and peaceful, but they are just that, ways. To move forwards into this great future, into Geulah, we all must learn to accept and refine these many, ideally complementary ways in the glorious tapestry that is Israel.

About the Author
Yishai Edberg is a member of the Religious Zionist Party's youth wing. He has previously served as a spokesman and graphic designer for the Yamina Youth and has written for such publications as VISION Magazine, The Post Millennial, and The Israel Press. Jesse is a student at the Tulane University of Louisiana where he is pursuing a degree in political science. The Complete and Translated Poetic Works of Avraham Stern by Avraham Stern, translated with forward and footnotes by Yishai Edberg is available today on Amazon and where books are sold.