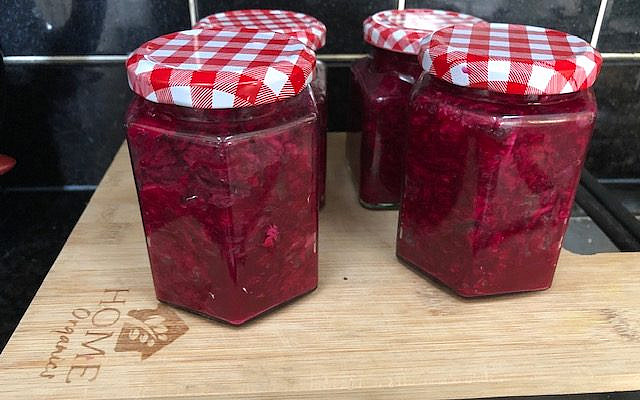 Walk down the vegetable garden at this time of year, there’s not a lot to see. Our 24hp Kubota tractor has tilled the beds, which are now sown to green manure or covered with muck from the goat-shed. Embryonic buds are forming on the skeletal currant bushes. Autumn-planted strawberries are visible, but shivering. The leeks are shivering too. Most of the root crops have been lifted and stored (or eaten). Here and there, rows of carrots, parsnips and celeriacs are overwintering, their leaves barely visible. Still erect, proud and strong are the hardy beetroots their red leaves flecked with mauves and purples, tips blackened by frost.

We grow round beetroots. Rhonda is a popular variety. Boltardy, as its name suggests is less prone to bolting in its first year. Should it bolt, all the energy will go into making flowers and seeds, consequently the roots are pitifully small. We also grow cylindrical beetroots which, my visitors tell me, you never see in the shops. I don’t know why not, they are prolific and delicious.

If you know where to look there are some permanent beds: amongst them artichokes, both Jerusalem and Globe. They are not related. Globe is a form of thistle, and we eat the flower. Jerusalem a type of sunflower – the Italian ‘girasole’ (turning towards the sun) was bastardised to ‘Jerusalem’ – and we eat the tubers lurking underground.  In amongst them, two metres wide and five metres long, a bed of horseradish.

Horseradish is a heritage plant for Ashkenazi Jews. It evokes memories of the shtetl. As maror, it is found on our seder plates. Wedges from the crown of the plant, with early green shoots attached, are for dipping in charoses. Grated roots are used for korech – that’s a maror sandwich invented by Hillel 2,000 years ago. My grandmother called the grated form “tseraibenes”. As a child I thought that meant ‘ribbons’ but I have since learned that raiben is Yiddish for rubbing or grating.

My Sephardi and Mizrachi friends insist that authentic maror is Romaine lettuce – and the Talmud endorses that view. All well and good for those in Mediterranean climes, but there is no way you could have produced lettuce in der heim, in March, without greenhouses and artificial heat. Instead my forebears used the most bitter fresh vegetable they could find, and freshly dug horseradish is seriously bitter.

That is not to say that horseradish is exclusive to Eastern Europe. It grows wild in many countries including Britain. Our neighbours grate it and soak it in vinegar and eat it with roast beef. Perhaps it is because of the ‘bittersweet’ nature of Jewish experience that we like to mix it with beetroot (beets are full of sugars) to make ‘chrein’ (or ‘chrane’ if you prefer).  The word itself is of Slavic origin and means, quite simply, horseradish.

I recall as a child taking a slice of challah, spreading it thickly with butter, piling ‘horseradish in beetroot sauce’ on top and folding it into a sandwich. My aspirational mother remarked (disapprovingly) to my father that this was how his father had enjoyed chrein, but that I could not have learned it from grandpa Johnny because I was barely two when he died. Clearly she thought it was a faulty genetic trait which had no place in St Johns Wood. Despite her best efforts I continue to enjoy chrein like that to this day, sometimes adding a chunk of cheddar cheese.

Grandpa Johnny had fought in France in World War One. He had inhaled copious amounts of mustard gas and had been a semi-invalid for the rest of his life. I heard the other day, in one of Stuart Russell’s excellent Reith lectures, that 200,000 soldiers died in the trenches after exposure to that primitive but highly effective chemical weapon, with another 100,000 surviving to return home and die a slow, painful death. Grandpa must have been one of the 100,000; he coughed his lungs out for another 35 years and died at 58.

The first time I made chrein from our own horseradish and beetroots, I was cavalier about the instructions (which recommended a well-ventilated space). Pausing only to wash and peel the freshly dug roots, I threw half a kilo of horseradish into the food processor and let the machine do the graft. I removed the lid to inspect the mash. A cloud of gas emerged, attacking my eyes, nose and mouth, even my ears. Within moments I was blinded, sneezing, coughing and wheezing – my cranium felt like it was on fire. I staggered to the sink and immersed my head in cold water. Relief came slowly, it took an hour or so. When at last the pain and congestion had subsided, when I could once again open my eyes and focus, I asked Dr Google what just happened?

Horseradish is a member of the brassica family (that’s a big family of edibles, from cabbage and cauliflower all the way to radish, mustard and wasabi). They produce toxins to deter predators. The mustard gas used in the trenches wasn’t made from mustard, but it got that name because it had a similar colour, smell and effect to the pungent gases given off by some of these vegetables.

These days I put the food processor at the end of the garden when I’m making chrein, and I use a 50-metre extension lead to bring it power. I love my chrein hot (say 3 parts horseradish to 1 part beetroot) but for the guests I make it considerably milder.

Whenever I eat it, I think of grandpa Johnny. It is a bittersweet memory, a life ruined by mustard gas but sweetened by chrein. Sometimes I also think of Bill Clinton who (so he said) didn’t inhale.