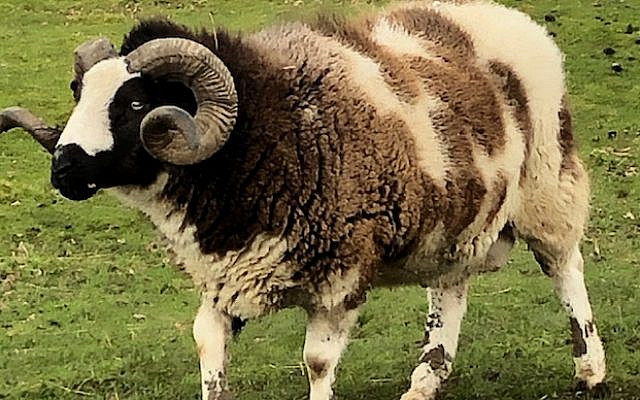 Although their true name is “Piebald Sheep” they are known colloquially as “Jacobs”. They are the ovine mimics of the British Friesian cow, mostly white but with black spots, or patches. They get their common name from the story of our patriarch, Jacob, who outsmarted his double-crossing father -in-law by generating flocks of spotted and speckled sheep.

All that took place in the fields of Aram, in Syria. When I search for Syrian sheep on the web (I wonder how many have survived the hostilities of the past decade) I find pictures showing a very similar conformation and colouring to those in our field.

The legend is that Jacobs reached these shores from the Middle-East, by travelling along the Mediterranean coast of North Africa and then via Spain, in the 17th Century. English aristocracy coveted them, to grace their newly landscaped parks and estates. It strikes me they had a similar trajectory to our Spanish and Portuguese brethren (omitting a century or two in the Low Countries). Others say that they are Scandinavian in origin, via the Scottish Islands

As a “heritage” breed they are robust and self-sufficient. Yet they were never much favoured by commercial sheep farmers and their numbers diminished in the 20th century. There were only a few hundred left in the 1970s when a movement was formed to “rescue” them. Today there are tens of thousands in the UK and their survival is assured. Their rescue gave birth to the Rare Breeds Survival Trust which has had many subsequent successes.

When this Jew wanted some sheep, they were the obvious choice (a few years ago I read that someone was importing them to Israel, declaring they should be the “National” sheep!). You may ask why I wanted sheep (wool is worthless these days and we don’t eat meat). The answer is that Jews and sheep are inextricably bound together (and we need to keep the grass down).

Abraham, Isaac, Jacob were all shepherds. Jacob’s sons (who were shepherds too) confirmed this to Pharaoh. Moses and King David were shepherds too. Sheep were sacrificed by their thousands in the Temple on Festival days. The Talmud describes how a group of sages were discussing the most important sentence in the Torah. Was it “Hear O Israel…..” or “And you shall love your neighbour as yourself”. The winning contestant was the command to sacrifice “one sheep in the morning, and one sheep in the evening”. The daily sacrifice consisted of these 2 sheep, day in and day out. It was the constancy, the devotion to fundamentals, that won the first prize.

Our little flock is headed up by Tufty. A statuesque, 7-year-old ram with horns that curve a full circle, and then another half circle, before tapering to a blunt point. Every child who comes here comments on what marvellous shofarot those horns would make. I would be very happy to keep them as a souvenir when Tufty (bis zwanzig) finally shuffles off his mortal fleece. Sadly, post BSE, this is not possible. Horns, like many other blood-containing animal parts, cannot leave the abattoir.

Tufty has a harem of ewes. Some are as old as him. He is the father of a multitude, around eighty lambs have gone forth from his loins since we acquired him as a scraggy adolescent. He has been working since the end of August ensuring that all his females are tupped. This means we can expect lambs in late January and February (gestation is 5 solar months less 5 days). He has a smug look today, he probably thinks he can rest for the next 10 months.

This year a nearby smallholder who has a few Jacob ewes, but no ram, has asked to borrow him for a few weeks when he has finished here. Instead of resting on his laurels, the old Lothario should be building himself up for another few weeks of passion. I’ll give him extra pellets in the morning.