America’s Right Bloc, voters who voted for right leaning candidates, earned more votes than the left bloc. If there had been a runoff election, Trump would have won without difficulty. Nevertheless, America’s election system is in desperate need of an upgrade. 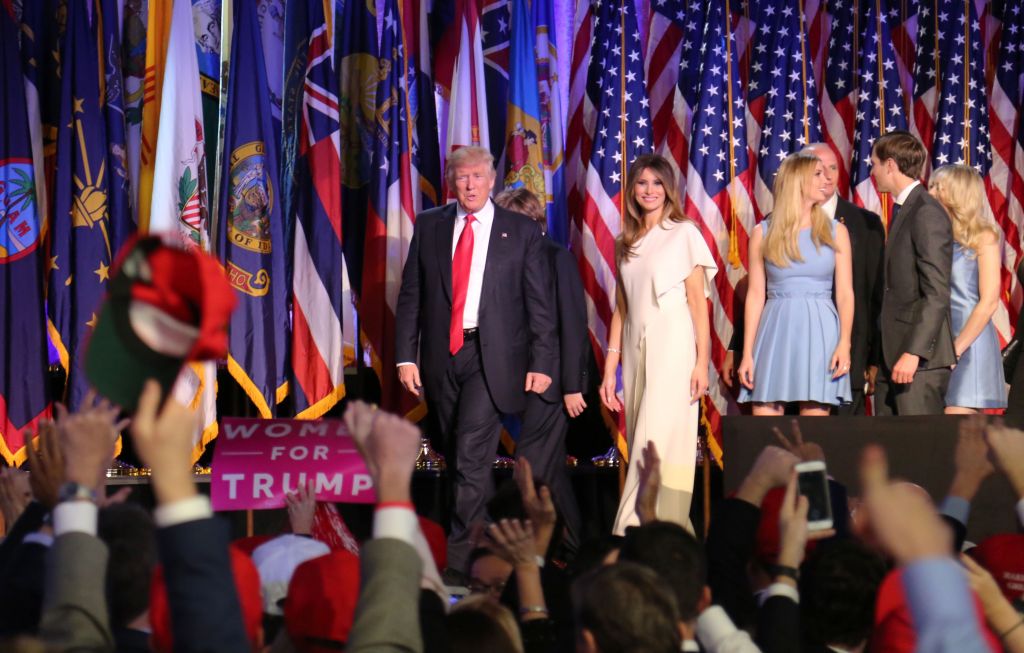 A popular narrative has arisen since the election that Business Mogul Donald Trump won the majority of the votes in the Electoral College (EC) necessary to be elected President of the United States, but failed to win the popular vote which went to former Secretary of State Hillary Clinton. There have been arguments about the undemocratic nature of America’s honestly archaic election system on one side, arguing that somehow their candidate would have won but for the EC, and some on the right are defending the EC as an electoral system that balances rural and urban interests. In truth, this is all nonsense.

The Constitution requires a majority of the electoral vote in order for a candidate to win the presidency, a plurality is not enough. Many of our elections in the United States, with a few notable exceptions, are “first past the post,” that is, the candidate who wins the most votes wins, regardless of whether this is a majority or a plurality. In some elections it has been possible to win office having earned little more than 1/3rd of the total votes cast. This is an election system which is especially susceptible to electoral anomalies. If two candidates run on the left and one on the right, for example, though the votes divided between the candidates on the left may total over 60% of the votes cast, the candidate on the right could win with less than 40% of the vote, but with more votes than either one of the two candidates on the left. Something like that has happened in this election. Evan McMullin, a conservative who was on the ballot in 11 states, won about 450,000 votes. Had these votes been in Trump’s tally instead, Trump would be much closer in the popular vote.

Which is not to mention that 4 million voters in the United States cast their votes for former New Mexico Governor Gary Johnson, the Libertarian Party nominee. By contrast a further 1.2 million votes were cast for Green Party nominee Jill Stein. If we look at the election in terms of right bloc vs left bloc, as we infrequently are forced to do in Israeli politics, the right bloc, which includes both McMullin and Johnson, won about 2.5 million more votes than the left bloc, with Clinton and Stein. 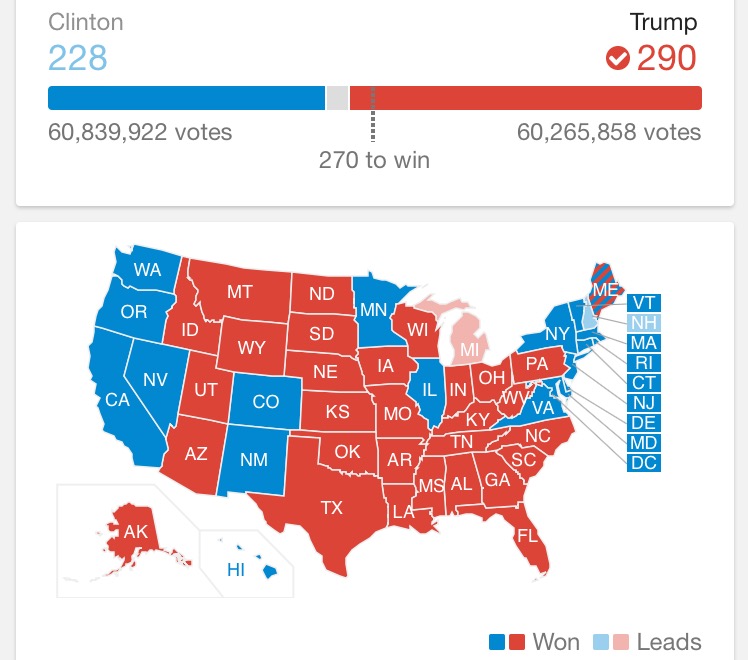 If a majority of the electoral votes are necessary to elect a president why would we even use a “first past the post” plurality system to elect our President? Surely the most important office in the United States would require a majority of the votes to win? If the US switched to direct election we would thus have to adopt an election system on the French Model with a national runoff election between the two candidates who earned the greatest number of votes. In this way, only a candidate who earned a majority could be elected. It is more likely that Donald Trump would win such a runoff under the circumstances than that Hillary would have. The argument that somehow Hillary would have won a direct election is thus as fraudulent as the arguments for the Electoral College.

There are arguments out there that the Electoral College was developed by the Framers with the deliberate intention of balancing rural and urban interests. This notion is so far beyond ridiculous it barely warrants a mention except that it has been preferred by those knowledgeable of American History. In 1787 America was a highly rural country with a population of but 3 million. The largest cities had no more than 30,000 residents. The notion that urban needs had to be balanced with rural ones was present in the British system, the so called Court-Country philosophical discussion. America’s founders were overwhelmingly Country Whigs who preferred dispersed power and rural interests, that is true, but America was so rural at the time and had so much land to grow into that the notion that urban centres were to become a serious issue was not at all nettlesome. In other words, it was not on their radar.

What was among their concerns was the logistics of conducting a direct election in the late Eighteenth Century in a new nation with precious little infrastructure. No less a figure than Benjamin Franklin, endorsed direct election and James Madison did likewise in the hopes that it would lead to expanded suffrage, since, at the time, only property owners could vote in most states. Another problem was that the Presidency was too important not to include in the infamous compromises that had already been reached.

When the New Jersey Plan was defeated, a plan which included voting by state, smaller states had a bad taste in their mouth. Sure, the new national constitution would be better than the extant Articles of Confederation, but what about poor little Delaware and Connecticut? The result was the Connecticut Compromise whereby the US Senate was apportioned equally to the states. This gave small states an undue influence on the nation’s legislative agenda. If one wishes to speak of balancing the rural with the urban, the Senate is already sufficient counterweight to the House of Representatives which is apportioned by population and favours larger states.

The House became the focus of the most unfortunate compromise, and by far the greatest error in judgement of the founding generation: the Three-Fifths Compromise. The population in the South was a mere fraction of that in the north, well the free population anyway. A majority of people living in the South were technically property. Southern states wanted their slaves counted for the purposes of apportioning the House. In the end it was decided that each slave would count as 3/5ths of a person for the purposes of House apportionment. For over nearly eighty years the South would have a disproportionately higher number of representatives relative to their free population. The Electoral College was a means of rolling these two compromises into the presidency and avoiding the logistical difficulties of a direct election.

The Framers understood that they were bringing together 13 disparate states that did not necessarily want to be united. These men made compromises as stopgap measures to knit the country into one with the hope that in the future Americans would mold together into a nation and at least some of these compromises would no longer be needed. The results of the American Civil War and the 13th and 14th Amendments would bring the Three-Fifths Compromise to an end, although the equal apportionment of the Senate remains.

The original election system involved each elector casting two votes with the winner serving as President and the runner up as Vice President. This was all fine and well so long as those two men were the friendly George Washington and John Adams. When the latter ran for president in a heated race against Thomas Jefferson in 1796, the latter ended up as Vice President. Imagine the runner up today serving as VP! This election system utterly collapsed in 1800, just thirteen years after its inception, when Thomas Jefferson and Aaron Burr tied for the Presidency. While it had been understood that Jefferson was running for President and Burr for VP, the latter allowed the House of Representatives to hold him up as a real choice for President in the Contingent Election. Jefferson ultimately prevailed.

The election was such a disaster that by 1804 the 12th Amendment had been ratified to separate the Presidential and Vice Presidential elections as they are today. The “winner takes all” method of casting Electoral Votes came thirty years later as Andrew Jackson sought to increase the likelihood of his party winning a presidential election. America has generally been stuck with this ill-conceived, half-broken, and makeshift electoral system.

Nor does the Electoral College balance urban and rural interests. In fact, urban centres like Los Angeles and San Francisco dominate California’s now 55 electoral votes in spite of nearly 20 million rural voters in that state. New York City dominates that state’s 29 electoral votes as does Chicago Illinois’ votes. For that reason, the more urban party, since the mid-20th Century the Democratic Party, comes to the election with about 230 Electoral Votes without really having to work for them, while the rural party, the Republican Party at this time, starts with only about 190. As a result, the urban candidate is automatically a likely winner while the rural candidate must fight for votes, in among other places, the urban centres of battleground states like Florida and Ohio.

Can we be rid of this antiquated election system, please? If they were here, the framers would hang their heads in shame that we have yet to improve upon it. The errors they made in their time should not be a burden upon us in ours. Let us put forth an amendment for the direct election of the President to include a runoff when necessary and give Congress control over election laws to streamline and secure our election process. This reform is desperately overdue.