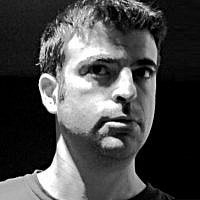 The Blogs
Ben Jacobson
Apply for a Blog
Please note that the posts on The Blogs are contributed by third parties. The opinions, facts and any media content in them are presented solely by the authors, and neither The Times of Israel nor its partners assume any responsibility for them. Please contact us in case of abuse. In case of abuse,
Report this post.

I’m not sure if I’ve ever seen this many construction workers in one place. And they’re all scurrying about, cutting stone sidewalk tiles, installing huge video monitors, wiping down freshly affixed glass panels. A few meters away, two journalists from an unidentified publication are overheard debating whether or not Yes Planet will even be ready for its grand opening in three days. We’ve been invited here by the Rav Chen multiplex chain’s publicity apparatus, eager to show off an NIS 200 million facility like no other Israeli movie theater.

The transparent elevator towards one corner of the gargantuan entrance atrium isn’t operational yet, but packages of chocolates and sour gummies are already lined up nicely behind the snack bar counters. Protective plastic is draped over the popcorn machines in the hall, which might actually be larger than Ben Gurion Airport’s indoor open space centerpiece rotunda.With an enormous silver screen behind him, Rav Chen/Yes Planet CEO Mooky Greidinger describes his organization’s meteoric and seemingly unstoppable growth trajectory. He has PowerPoint slides demonstrating the consortium’s market share in Eastern and Central Europe, its always-rising numbers of silver screens in Israel, and a timeline dominated by “most”s and “first”s (opening the first cinema ever in Haifa in 1930, opening Israel’s first multiplex in Dizengoff Square in 1982, etc.).

South Korean 4DPlex engineers were flown in to configure the 4DX system, which is like 3D, but with the addition of moving seats, fans, rumbling cushions, strobe lighting and – I kid you not – scented schpritzes.

The Auro 11.1 sound system is likewise hardcore, with several rows of equidistant speakers lining the fronts, sides and ceilings.

There’s an entire section, surrounding a café/lounge, dedicated to VIP viewing, a cluster of four rooms for about 50 movie-goers each, lined with remote controlled leather recliners. A convention center will host corporate events. Ten restaurants will serve pizza, Big Macs, espresso and more.

Wait a minute – isn’t this 2012, the era of the cinema’s slow demise? Conventional wisdom has it that today’s pop entertainment junkies are rooting for the suddenly underdog movie-going industry to survive the current trend of plummeting global revenues. Sure, it can be argued that Hollywood doesn’t need to be dependent on cinema box offices in order to keep churning out content. But in Yes Planet’s orbit, the Rav Chen people insist, there’s still something magical and sacred about a night out at the movies. And with nearly 200 more Rav Chen screens showing movies in 2011 than 2010 – their biggest growth year ever – it’s hard to argue with them.

Not all pop entertainment junkies like paying for the content they enjoy, some prefer the comfort of their own couches to the cineplex schlep, and many prefer their movies without the distractions of non-2D “embellishments.” Yet the idea of industry game-changers that can keep the masses from abandoning movie theaters is a unifying rallying cry. Bigger screens, extra booming sound, more immersive viewing technologies – Hollywood is betting on it all, while the geeks cheer them on.

These technologies are works in progress. There were power outages during the press event. As a format, 3D doesn’t always work well, stench isn’t something people like paying for, the augmentations’ usefulness in the creative toolbox has yet to be solidified as a standard, and the excessive jostling of 4DX conjures images of dark rooms full of people reaching for their barf bags.

But you’ve got to hand it to the leaders of Israeli commerce, the superstars of Bibi-nomics. They’re undeniably bucking global business trends with their vision and growth both domestically and overseas. Working in cahoots with Rishon Lezion’s urban planners, they’ve successfully positioned the town as central Israel’s premiere mega retail and entertainment destination. The Superland amusement park is adjacent to Yes Planet, while Ikea, plus several big box stores and malls are all within five minutes of driving – itself enabled by new exits off the Ayalon freeway and the super-fast Route 431, which opened in 2009.

Based on the questions they asked of Rav Chen/Yes Planet CEO Mooky Greidinger, some of the journalists at the event seemed bent on squeezing a social justice wrongdoing angle out of their coverage of the opening. And those storylines shouldn’t be so hard to find. But for the captains of industry and the pop entertainment junkies, the opening of Rishon Lezion’s Yes Planet clearly qualifies as just cause for celebration.

About the Author
Ben has contributed culture and entertainment content to a variety of publications, including Haaretz, The Jerusalem Post, GoJerusalem.com and Jerusalemite.net. Since 2007, he has served as the co-director of Action Packed Media, a new media managed service boutique specializing in content and marketing for entertainment brands. Action Packed Media's newest initiative is ManagedForMimi.com, which offers content marketing services on a subscription basis. Ben also serves in the Israel Defense Forces' reserves, in the IDF Spokesman's social media department.
Comments