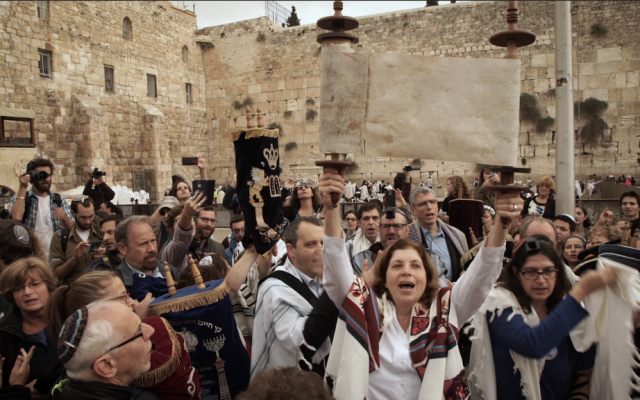 Illustrative. Anat Hoffman, director of Women of the Wall, holds a Torah scroll at the Western Wall, November 2, 2016. (Luke Tress/Times of Israel)

In recent years, Judaism seems to be relentlessly tearing Israeli society apart. The growing enmity between Israel’s religious and secular tribes threatens the very solidarity on which the Jewish State has always relied on to survive. Religious intolerance — and the backlash it engenders — constitute the proximate cause for the unprecedented failure to form a coalition after the April election. We desperately need to change the dynamics.

Sadly, extremists and cynical politicians have hijacked the debate, leaving many Israelis despairing. It is time that fresh, responsible, Zionist leadership offer new thinking about what the elusive balance between a Jewish and a free society should look like.

Yes, the upcoming elections are about accountability for an unapologetically corrupt prime minister; the continued independence of Israel’s courts; and preventing the annexation of 2.5 million Palestinians in the West Bank. But they are also very much about whether Jewish citizens will enjoy a healthy, open, tolerant — Jewish society. That’s why it is time for old formulas and unsatisfactory status quos for life in a “Jewish and Democratic” state to give way to a better national strategy.

For me, the most compelling part of the Blue and White party’s vision may be its blueprint for changing the relationship between religion and state — a relationship which leaves so many Israelis dissatisfied and resentful. Rather than accepting a state that suffocates and alienates its citizens, the party insists on giving the Jewish public the freedom to celebrate its colorful cultural and religious heritage .

Blue and White — presently the largest party in the Knesset — by design brings together leaders from society’s disparate tribes and ideologies. From this religious diversity, a shared formula has emerged that points the country towards a healthier path forward. I believe the party’s platform offers Israel the best chance for a fresh start that both respects citizens’ religious freedom and their traditions.

Sadly, in recent years, election campaigns drift toward the lowest common denominator and the press almost systematically avoids reporting any substantive discourse. Indeed, most of the public has little idea what the parties actually believe. So for those who care to hear about what policies should govern Jewish life in Israel, here are five of the key changes that Blue and White would make:

For arcane historic reasons, towns like Haifa have public transport on Shabbat. Surely this hasn’t undermined the quality of religious life for its many Orthodox residents. Sabbath observance should not be imposed by a central government based on coalition deals. Rather, it should be a decision that reflects a community’s values and priorities. If the vast majority of people in Ramat Gan decides that public transportation and theater on the Sabbath improves their quality of life it, proscribing it is ill-advised. On the other hand, an Orthodox city, like neighboring Bnei Brak should be able to prohibit buses and businesses on the Sabbath, if this constitutes the predominant local sentiment.

3. Allowing civil marriages: Israelis’ disenchantment with the Rabbinate’s heavy-handed oversight of weddings has led to an increasing percentage of the population – including many Orthodox Jews – to opt out, conducting their nuptials outside the confines of the official religious establishment. With a significant non-Jewish population interacting with Jewish Israelis’ across society, the historic ban on marriage between Israelis of different persuasions is deemed by many couples as little more than racism. These policies serve to foster animosity towards the magical elegance of traditional Jewish wedding ceremonies. Blue and White calls for permitting the so-called “Brit HaZiguit” – essentially civil weddings – for heterosexual (and same sex) couples. Ironically, by granting more options and leniency, an open approach promises to actually help many Israelis find their way back to time-honored, but far more consequential and creative matrimonial rituals.

4. Granting the many streams in Judaism access to Western Wall: The cancellation of the painstakingly negotiated “Western Wall” compromise due to the opposition of a small Haredi minority, was a low point in the past government’s abysmal management of religion and state. Not only does it constitute a dismissive insult to the majority of affiliated Jews around the world, and their ability to access Judaism’s holiest site. It also taught that religious extremism and intolerance pays. It implicitly supports cynics who believe that the different factions that make up Israeli society will never be able to get to “Yes.” But the fact is, that the vast majority of Israel’s competing interests had already found common ground.

Allowing for egalitarian prayer at the Robinson’s Arch section of the Western Wall makes sense and confirms that there has never been a single way for Jews to seek spiritual inspiration and communication with the Almighty. As Benny Gantz explained at this year’s AIPAC convention: “As a proud owner of a red beret, worn by the liberators of the Kotel I can tell you with confidence that the Western Wall is long enough to accommodate everyone. Everyone.”

5. An end to religious compulsion: Yair Lapid for some time has explained why he does not support separation of church and state in Israel. When the best of Jewish tradition informs public life, it makes life more meaningful. But wishing to live in a country with a Jewish character does not mean that people should be forced to live according to the narrow confines of Halacha. Indeed, he argues that until pork was specifically prohibited – most Israelis never touched traif. As long as there was no formal ban on eating bread at Passover, most Israelis were perfectly happy eating Matzah during the festival. Ironically, once laws were passed and the long arm of government intervention reached people’s plates, it became a matter of principal and many Israelis adopted contrarian behavior.

Lapid argues that Israel’s powerful solidarity in refraining from driving on Yom Kippur is explained by the same rationale. Israel has not yet banned driving on Yom Kippur – and so secular Israelis are just fine with being respectfully asked to honor the Holiest day on the Jewish calendar. This is the spirit that the country needs to embrace. That’s why the Blue and White platform calls for a complete reform in the way the country oversees Kashrut: calling for transparency and openness for those who want supervision. The same is true for conversions which need to be welcoming and accessible, giving potential converts a rich menu of different, local programs, based on the Jewish tradition that inspires them.

Let’s face it: the status quo upon which much of Israel’s religious policies are still based was a political exigency which David Ben-Gurion was forced to accept over 72 years ago. In the lead up to the United Nations debate over establishing a Jewish state, Ben-Gurion sought to ensure that Zionists and their political allies around the world not face extremist ultra- Orthodox opposition at the UN. The compromise may have served a tactical purpose at the time, and subsequently offered a modicum of societal stability. But in recent years, the status quo mostly creates acrimony among the secular and traditional Israeli majority who resent the central government’s imposition on matters of conscience.

This can be fixed. It doesn’t mean that the Sabbath shouldn’t be venerated as a national day of rest and recreation. It doesn’t mean that Jewish heritage and the wealth of meaningful messages and traditions it contains that should be ignored in the spirit and policies of the Third Jewish Commonwealth. But it does mean that by offering Israelis more freedom on matters of conscience, they will be more able to embrace the beauty and wisdom of their heritage.

Some people assume that as a centrist party, Blue and White by definition must be a timid, wishy-washy political player, paralyzed by its moderate inclinations. That’s simply untrue. Blue and White reminds us that most of Israelis actually are able to agree about how to live together harmoniously, even in the controversial arena of religion. A party, whose leadership is made of secular, Orthodox, traditional and even Haredi leaders has both the stature and culture of tolerance to take bold steps to restore our enthusiasm for living in a Jewish homeland — along with respect and solidarity for the rich, diverse, social mosaic that makes up modern Israel.