Hours before the second days of Pesach, I attended a gathering of education activists questioning the recent recent weakening of Yeshiva school standards met on the steps of City Hall in New York City. 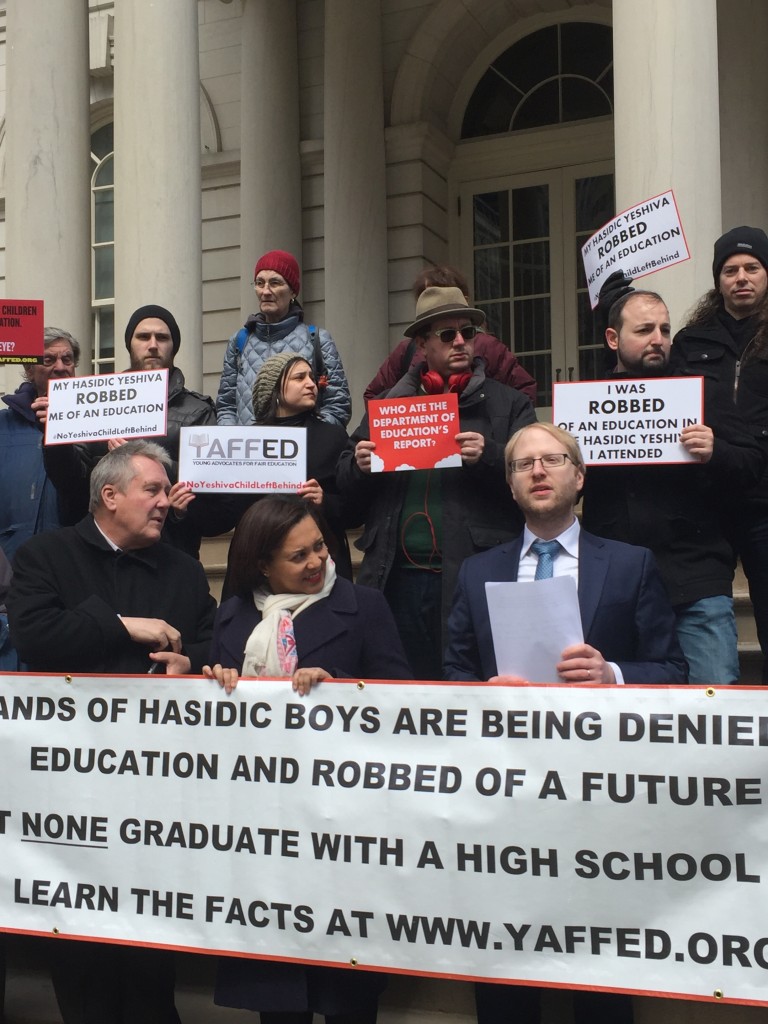 According to Yaffed, a new law passed as part of the 2018 NY state budget was crafted specifically to affect only Hasidic and Orthodox Jewish children. It seeks to weaken the NY State Education Department’s ability to provide sufficient oversight to ensure that these children receive an adequate education. This law was passed as result of the efforts of Simcha Felder, a State Senator from Brooklyn who alone held up the state budget in order to insert language intended to deprive students of their right to a basic education that will prepare them for good-paying jobs and success in life. New York State law requires non-public schools to provide an education that is “at least substantially equivalent” to that of public schools, so that no student is left in ignorance. The law requires non-public schools to provide instruction in “arithmetic, reading, spelling, writing, the English language, geography, United States history, civics, hygiene, physical training, the history of New York state and science.” But this law has not been enforced for decades, by either the state or the city. The Mayor and the NYC Department of Education has delayed taking any action for over two and a half years, even after they had promised to do so repeatedly. The NY Commissioner of Education was in the process of drafting new guidelines to enforce the law, which apparently prompted Sen. Felder’s actions to attempt to exempt Yeshivas from meeting any educational standards. Meanwhile, tens of thousands of children are not receiving the basic education to which they are entitled.

The protest, organized by Yaffed, Young Advocates For Fair Education, discussed the validity and the ramifications of the recent New York State bill tied to its annual budget The Curious Case of the Yeshiva Carve-Out – The New York Times
www.nytimes.com/…/yeshivas-budget-new-york.html

Yaffed’s Executive Director, Nafuli Moster, a leader the past several years of exposing policy formation, execution and outcomes, suggested a six-point alternative to the new policies, including but not limited to: verifying if the bill is indeed constitutional, connect with pro-Bono attorneys to battle its legality in court, further study the bill and develop alternative standards, applications and research into success rates, seek full enforcement of law, demand objective measures for critical thinking and continuing the discussion of the issue of standards in yeshivas in community meetings, education gatherings, visits to elected officials and in the press.

Multiple small organization leadership and several speakers reiterated Moster’s sentiments in one form or another. One speaker, Michael Rebell, executive director for the Center for Educational Equity, and Professor of law and education at Columbia University, tried to make the case that this bill is unconstitutional and that it puts yeshiva students under more and unequal pressure.

This seemed to contradict previous remarks citing that these standards under-develop students, making them dependent on government subsidies and controllable by a few rabbinic leaders and ignorant of independence and choice of employment opportunities.

David Bloomfield, professor of educational leadership of law & policy at Brooklyn College, of the CUNY system, pointed out similar questions and further cited the lack of accountability of those aforementioned leaders.

Two Democratic elected officials spoke. NYC Council Member Daniel Dromm, from Queens is demanding answers to the financial ties to this issue. State Senator Marisol Alcantata, part of the Independent Democratic Conference, spoke about how this legislation impacts Catholic Schools, a subject close to her. She is an immigrant and graduate of a private, Catholic School.

While I believe that yeshiva schools have an obligation to educate students that includes a curriculum of core subjects with accurate facts and competitive accountability, we must remember, we choose these schools. We can not label all yeshivas in this category. There are many quality day schools stressing academic achievement, hiring certified and trained educators and administrators and offering religious classes, while promoting chesed, tzedakah and Torah.

There are candidates looking to run against Simcha Felder in a Democratic primary and question the power of the Jews.

Time will tell what happens.