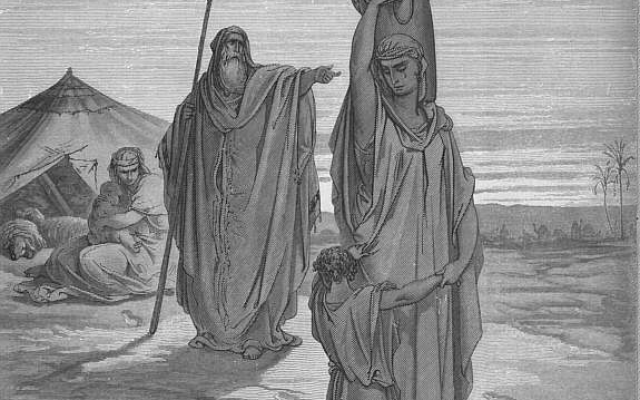 Expulsion of Ishmael and His Egyptian Mother, by Gustave Doré. (public domain)

What is the ethical and legal permissibility of the exile of Hagar and Yishmael? What justification existed for Avraham to violate the right of the firstborn and his obligation to support his wife?

The story of the exile of Yishmael and Hagar culminates in two profoundly emotional and legally complicated events in the life of Avraham. After G-d clarifies for Avraham that his true heir will in fact arise from Sarah (17:16), Yishmael’s status as an heir, and the rights of his mother as a wife, are unceremoniously erased as they are eventually exiled.

From the perspective of the Torah, this raises serious ethical and legal questions. Hagar married Avraham and bore him his true bechor (firstborn). Although later Hagar loses Avraham’s favor at the behest of his primary wife Sarah, the adept student must recall Devarim 21:15-17. Regardless of the desirability of the wife to the husband, if a child is the true bechor then he has impeachable rights of inheritance.

Avraham’s discontent with Sarah’s request suggests he too had issues with the proposition (21:11-12). Certainly he had emotional ties to both that would be enough to justify his reluctance, but there are secular legal considerations that he may have been considering as well.

The contemporaneous legal code of Hammurabi (1795-1750 BCE), which in some form may have inspired the law enforced in the land of Canaan at the time of Avraham, has very specific details pertaining to Avraham’s predicament.

Regarding Hagar and her loss of status as wife, code 145 prohibits a second wife from ascending to the level of equality with a primary wife. Furthermore, code 146 states that a maidservant who became a second wife and bore children is to be treated as a slave if she assumes equality with the primary wife. This legitimizes the harsh response to Hagar’s initial ascension and subsequent flight and explains their emphasis that Hagar remains Avraham’s maidservant, not his wife (16:5-6) .

In regards to the exile, code 137 complicates matters. If a man wishes to send away a wife that already bore him children then he must provide her with her dowry and enough material goods to raise her children. Certainly more than just a canteen of water and bread (21:14). However, code 141 states that if a man’s wife tries to ruin her house, her husband can release her and he gives her nothing as a gift of release. Given the arguments presented by Sarah of the chaos created by Hagar’s unjust assumption of equality (16:5), coupled with the threat Hagar’s son posed to their son Yitzchak (21:9-10), may have been enough justification to satisfy this legal requirement. One could even suggest that this somewhat reduces the critique of Avraham’s miserly release of Hagar and Yishmael as less cruel than the standard, as at least he sent them with a canteen and bread.

Furthermore, codes 170-171 describe the difference between inheritance rights of children from different wives. If a man has children with his maidservant, those sons only inherit alongside the first wife if the husband specifically refers to them as his ‘sons’. If he dies before doing so, then they do not inherit with the sons of the first wife. This legal insight provides an intriguing explanation to the exchanges between Sarah, Avraham and G-d. This explains why Sarah calls Yishmael the “maidservant’s son” (21:10), emphasizing to her husband the importance of understanding Yishmael as not his ‘son’, but hers. Similarly, when exiling Hagar and Yishmael, G-d refers to Yishmael as the “son of the maidservant” (21:13) and the text conveys Avraham’s perspective of Yishmael merely as the “boy” (21:14).

Further still, Avraham is never quoted as calling any child of his ‘son’ until the akeida and then does so repeatedly (22:7,8 and 24:3,4,6-8). The text conspicuously refers to Yishmael as Avraham’s son objectively many times (e.g. 16:15 and 17:23,25) but never through the lips of Avraham. Demonstrating to the reader the objective fact and emotional status for Avraham of this filial relationship, yet hinting at his delicate handling of the legally binding nomenclature.

Most curious of all, this legal perspective explains the seemingly false statement made by G-d that Yitzchak is Avraham’s “only son” (22:2).(A) Enlightened with the legal reality that likely plagued Avraham’s mind following the expulsion of his wife and true bechor, this misnomer may represent G-d confirming for Avraham that in the eyes of the law and the divine, Yishmael, is not his son. Yitzchak truly is his “only son”.

(A)  A critical detail often explained away by either reinterpreting the word “yihidha” as “beloved”, despite the fact that even Rashi and Ramban explain it as “only son” (although each explaining away the factual inconsistency in their own way).