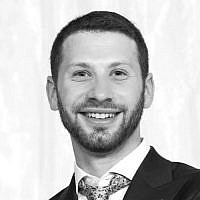 The Blogs
Moshe D. Rom
Apply for a Blog
Advertisement
Please note that the posts on The Blogs are contributed by third parties. The opinions, facts and any media content in them are presented solely by the authors, and neither The Times of Israel nor its partners assume any responsibility for them. Please contact us in case of abuse. In case of abuse,
Report this post.

As we relive our exodus from Egypt each year during our seder a central theme is to feel as we ourselves have left Mitzrayim. Most of us understand this as an obligation to use our imagination to relive this historic event. In fact our Seder is laden with audio-visual tools that support this idea. We eat Matza because the Jews left in a hurry, Marror to remember the bitter work. Many sederim even have the custom to carry sacks on their backs etc. The Rambam is Hichos חו”מ ז:א even replaces the word “לראות” with “להראות”.

However, our Chassidic masters already teach us, (much as is the derech of holy Chassidus) that Yetzias Mitzrayim was much more than a physical historical event. There is a deeper, inner meaning to Yetzias Mitzrayim that applies to each and every one of us, TODAY just as it did 3000 years ago. Yetzias Mitzrayim, “freedom” is as much a mindset as it is physical. The obligation is not only to remember but to EXPERIENCE. The Alter Rebbe stresses this point in various different essays.

In this essay, I will examine a very physical 21st century guela that myself and many others experienced and can easily relate to, and then using the tools the Baal Hatanya gives us in his various essays, we will examine this guela and see how we can apply these tools to experience a spiritual guela both in our private lives and Iy”h the ultimate Guela Shleima bkorov mamish.

I was privileged to grow up in a mid-sized midwest blue-collar American town. We had everything one could want in a small town from affordable living, to quality Jewish education. We were also extremely proud of our 3 professional sports teams; The Cleveland Browns, Cavaliers and Indians. However, beginning with a fabled World Series game on Yom Kippur no team could seem to seal the deal. Cleveland became the butt of all jokes. The sports fans reading this are surely familiar with The Catch, The Drive, The Fumble, The Shot and The Decision. Over and over again it seemed as if G-d did not want us to win. In fact in 2015 when one Googled “why does G-d” the 3rd autocomplete result ws “hate Cleveland Sports”. Then on a day so many of us will carry for the rest of our lives redemption finally came. On June 19th, 2016 the familiar voice of Mike Breen rang out “Its over! Its over! The city of Cleveland is Champions once again!”

(Pause for those who were there to relive that wonderful event).

While perhaps trivial, this גאולה גשמי mirrors a גאולה רוחני or really any sort of Guela, as ultimately the physical and spiritual are almost always reflections of each other.

In that moment I remember feeling two distinct expressions of redemption. The immediate and most poignant feeling in any Guela is finally reaching your goal that seemed so far away. The impossible has been attained, the proverbial glass ceiling shattered. It is an exhilarating feeling of liberation and you feel like you can accomplish anything.

The second feeling I distinctly remember was one of unity. Just 2 weeks later the city Cleveland was privileged to host the Republican National Convention following the nomination of our would be President, President Donald J. Trump. This convention brought with it the incredible sense of divide and conflict that to this day grips our nation. Every liberal and SJW came downtown to protest this terrible mistake Americans seemed intent on pursuing. Violence ensued, and over the course of the convention 24 arrests were made. Rewind 2 weeks and all these differences faded away. Everyone, regardless of race, religion political and/or sexual orientation celebrated together. The Cav’s motto “All for One, One for All” seemed ever so appropriate.

In Chassidus the first expression is called יציאת מצרים, and the second ביטול. The word מצרים comes from the root מיצר border. Each and every one of us feels trapped, or at least limited based on our own abilities and intellect. When one experiences a גאולה these borders fade away. This is because ultimately these borders are based on US, but we do not run the world or even decide specific outcomes, G-d does. When we come to rely on G-d anything is possible, as just as easily as G-d created the sea he can split. This is one of the integral lessons of our incredible story of Exodus. G-d bent and played with nature to prove that in truth the supernatural and the natural are one and the same. Teva, nature is all just a mirage masking the true hand of G-d in anything and everything.

Before addressing the second expression of ביטול, I would like to introduce 2 more aspects of גאולה. The first is that this amazing redemption was, as any redemption is, a gift from G-d. We do our part but ultimately any and all outcomes (as is obvious from our loooong drought) are decided by G-d. Sport Science has a video where they demonstrate that LeBron James had just a 20th of a second window to complete his legendary block. It is quite obvious that was no longer in the realm of human skill…

The second is that this redemption, like any other, was not felt equally by everyone, not even every Clevelander experienced it as I did. The same is true about the גאולה from מצרים, where only ⅕ of the Jews merited to leave. While this may seem intuitive that each person has their own unique experience, if all גאולה is truly just a gift, why do we not all feel it equally?

The answer really ties all of this together. The reason not everyone experiences redemption equally, is inasmuch as it is a gift from G-d, one must be invested in order to be prepared to receive this gift. There is a Midrash of “…ארבע נכנסו לפרדס” If one receives without being properly prepared not only are the results not positive, they can be negative or even devastating. In Chassidus this investment is known as ביטול. To be מבטל means to surrender one’s ego and become part of something bigger than himself. Now it is one thing to מבטל oneself to a sports team or a city. It is easy, trust me. However, the real עבודה is to be מבטל oneself to G-d. Because the redemption ultimately comes when we stop relying on our own abilities, and instead relying on The Ultimate Source, one can only feel it if he is attached and one with his נפש אלוקית and G-d. This is actually represented by the מצה and the prohibition to eat חמץ. חמץ rises and represents the feeling of self (ישות in Chassidus) whereas מצה represents the lack thereof. We eat the מצה to prepare ourselves for the redemption that happens כחצות הלילה. Our עבודה the entire year is to get to a level of ביטול through קיים תורה ומצות to be prepared to EXPERIENCE this גאולה on Seder night.

Iy”h we should merit to experience a real יציאת מצרים on seder night, each on our own level and ultimately we will all together experience the גאולה כללי במהרה בימיני as well.

From the Archives: I originally wrote this essay for Pesach 2018 but this is the first time I am publishing it.