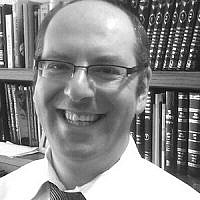 The Blogs
Shaul Robinson
Apply for a Blog
Advertisement
Please note that the posts on The Blogs are contributed by third parties. The opinions, facts and any media content in them are presented solely by the authors, and neither The Times of Israel nor its partners assume any responsibility for them. Please contact us in case of abuse. In case of abuse,
Report this post.

What is it that we are remembering when we when we say the prayers of remembrance, Yizkor?

The following is from news reports of one of last week’s terror attacks in Israel. And I ask the question – how is the following even possible? “This past Saturday night, Rabbi Aaron Benita was stabbed to death while walking in the Old City of Jerusalem with his wife and two children. His wife, Adele and one of their children, a child of two, were also stabbed, and injured…

Adele Benita described the immediate aftermath of the attack, as she pleaded with passersby for assistance. She said Palestinian youths who saw the attack laughed and cursed at her as she yelled for help. She said that one of them slapped her and another laughed in her face and told her to “drop dead” when she told him she’d give him a million shekels if he helped her get away with her two babies. “They saw that we were with two baby carriages,” she said.

Stabbed, bleeding and losing consciousness fast she used her last ounces of energy to run toward security forces for help.”

I believe people are fundamentally good. I believe that ultimately peace and morality will prevail. So why, yet again are innocent Israelis being gunned down for the temerity to walk in the streets of Jerusalem?

And I want to answer that question by saying a word about Yizkor.

Most people would say that at Yizkor the main prayers we recite are the ones for our dear relatives, and while we are at it, we add on memorial prayers for the victims of the Holocaust, for fallen Israeli soldiers, and the Av Harachamim prayer for destroyed Jewish communities.

But most people, in this instance, would be wrong. It’s precisely backwards.

We don’t know the precise origin of Yizkor, but we know enough to be able to say the following. After the first Crusades, in the year 1096 or thereabout, as entire Jewish communities died al Kiddush Hashem, to Sanctify the Divine Name, after an incomprehensible wave of violence swept away some of the most pious, learned, loving Jews who had ever lived, Jews in neighboring towns resolved never to forget their martyred brethren, many of whom had left no family behind at all.

First the Av Harachamim prayer, aa elegy to the Jews – “kehilot hakodesh shemasru nafsham al kedushat Hashem” – entire communities killed for the crime of being Jewish – and then, after wave of Crusades, then massacres following the Black Death and expulsions of centuries old communities, gradually evolved the Yizkor prayers we say today.

Yizkor was, first and foremost, about remembering Jews who were martyred – who were killed for the crime of being Jewish. Secondary to that developed the tradition of saying Yizkor for individual family members. That’s why we insist at LSS that every single person stays in for the ‘national’ memorial prayers.

The heartbreaking description of a women whose husband has been murdered, who has been stabbed, whose baby has been stabbed, surrounded by people spitting and  jeering  – that is an experience that is one thousand years old, at least.

The repeated massacres of Jews in Europe, that gave birth to Yizkor (Sephardim do not say Yizkor) came as a result of incitement against Jews.  They are a memorial to a time when Europe, the church, the monarchy, demonized and dehumanized the Jews of Europe, declared them to be contemptible, guilty, deserving of execution.

From the Crusades to the Holocaust, when you wanted to kill Jews, all you had to was persuade ordinary people that they didn’t deserve to live. And then you didn’t even need armies – all too often their neighbors would be happy to do the killing themselves.

And that incitement carries on today. A Max Blumenthal can speak of the death of Rabbi Eitam and Naamah Henkin as two “colonists”; as close to excusing it as is possible.

George Galloway, the rabidly Israel hating UK politician, can tweet “a new intifada may have begun in Palestine. Or won’t be long delayed. Whenever it comes I will support it with every breath God gives me.”

And the BBC can report the Motzei Shabbat terror attack where a Palestinian killed two innocent Israelis and wounded two others as”Palestinian shot dead after Jerusalem attack kills two.”

This, like much reporting here in America, creates a green light for terror. It signals to the rest of the world, to the Palestinian people themselves that the worst violence, murder and terror against Jews is not regarded as beyond the pale.

How could that horrific scene happen in Jerusalem Saturday night? Of an injured women being jeered by bystanders?  Because of the worst sort of incitement and a willful turning away on the part of Western governments. Because of the textbooks and media subsidized by the American government that are filled with blood libels and hate speech. In Gaza a baby is already named after the murderer of the Henkin family. Soon in Ramallah, no doubt, there will be a street named for him too.

In New York last week, Prime Minister Abbas can declare he is not bound by the Oslo accords – and is rewarded with the flying of the Palestinian flag – the United Nations is effectively saying, “We will support your use of violence, not negotiations to achieve your state, we support you in perpetuating, not ending a conflict.” And yes, then it is no surprise that four innocent Israelis die as a result. And as it happens, I personally support a Palestinian state, wish ordinary Palestinians and Jews live together in peace for thousands of years – but that can only come at an end to the violence, not as a means to wage more violence.

And that’s what regretfully we have to remember at Yizkor – our ancestors needed to warn us, us too – that when the world dehumanizes the Jew, the worst sort of danger awaits us.

The Halakhist, the person whose world view is shaped by the pure sources of Jewish law is troubled by the idea of memorial prayers on a Yom Tov. We do not usually say memorial prayers even on a minor holiday like Tu b’Shvat – yet on a full Yom Tov like today we do?

But sometimes it is minhag, custom, more than the halacha that captures the reality of Jewish life. How can we say sad prayers on a happy day? The question, though, is ridiculous! As if there was ever such a thing as a joyous occasion that we could just forget for even one moment, totally forget, all that has happened to us.

As we prepare for Simchat Torah, it will not necessarily be an easy one this year. But perhaps the following can help us frame our mood. Rav David Sperling, one of the teachers at the Nishmat seminary founded by Rabbanit Henkin whose son and daughter-in-law were so brutally murdered last week, described a visit that he paid the family this past Shabbat.

“I spoke on Shabbat to Rabbanit Henkin (when I paid a call to her and the Rav in their Sukkah – may they be comforted amongst all the mourners of Zion). I asked her if there was anything I should say to the Beit Midrash for her.

She would also like us to celebrate with joy on Simchat Torah. To hold the Torah tightly close to our hearts, to kiss it and raise it high. To dance with the joy of Torah, because now, more than ever, may we merit that the joyful light of Torah shine forth, on us, and all Yisrael.”

Let us commit to doing the same, and as we now say Yizkor, let us join our prayers to the prayers of all generations of Jews before us, every one of whom prayed to live in a world of peace, a world without antisemitism and hatred, a world where we can see the light of our people and our Torah light up all of humanity.

About the Author
Born in Glasgow, Scotland. Holds a BA in Economics and an MBA. Former Rabbi of Cambridge University and Barnet Synagogue in London. Appointed Senior Rabbi of Lincoln Square Synagogue in Manhattan in 2005.
Comments