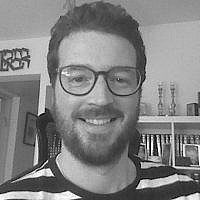 The Blogs
Ebin Sandler
Apply for a Blog
Please note that the posts on The Blogs are contributed by third parties. The opinions, facts and any media content in them are presented solely by the authors, and neither The Times of Israel nor its partners assume any responsibility for them. Please contact us in case of abuse. In case of abuse,
Report this post.

On Yom HaShoah, I arrived late to morning prayers with my one-year-old daughter’s head peeking out from the baby carrier. As I rushed into the sanctuary, I could hear that the Torah reading would begin shortly. So I quickly opened my Bible, bare of my prayer shawl or phylacteries.

Just before the Torah was removed from the ark, a much younger man rushed over to me. He didn’t look older than 18 with short cropped hair, his wispy black beard a reminder of the omer’s march forward.

“Tefillin?” he asked, pointing to his own phylacteries. I realized that this man, a boy really, whom I didn’t recognize and I doubt recognized me, was offering to lend me his tefillin. Perhaps he feared I had forgotten my tefillin, or maybe he wondered if I didn’t have any at all. At any rate, he cared enough to approach a stranger and offer to help. I was touched and assured him I had my own, after which we both turned our focus to the Torah reading.

Minutes later, while a special prayer was recited for the six million Jews who perished in the Shoah, I thought about the boy’s seemingly small, random act of kindness. I immediately felt a rush of gratitude for this boy, who had approached a father in his forties simply to offer his help.

Midmorning, I paused from work and stood on our balcony, surrounded by the sound of the memorial siren. I noticed a mother with a stroller who had stopped on the street below and I was reminded of my wife’s grandmother and her three aunts, victims of the demons of Auschwitz. I then thought of my precious daughters, blossoming in the Land of Israel three quarters of a century later, surrounded by love, family and Torah. And I thought of my dear nephew thousands of miles away, who had just begun to put on his own tefillin. In that moment, I was certain that the millions of precious martyrs of the Shoah did not die in vain, for their values and memories live on within every one of their descendants.

Often, we look at this great nation and notice the symbols of our triumph over the German monsters and our current enemies–the gorgeous landscapes, the teeming yeshivot, the multi-billion dollar technology deals, among so many other miracles. On Yom HaShoah this year, however, an eighteen-year-old boy’s tiny act of kindness reminded me that the Nazis never really had a chance to defeat the indomitable spirit of compassion and truth.

About the Author
Ebin Sandler writes about the arts, G-d, American law, and memories that refuse to fade away. He weathered Minnesota winters and New York nights before discovering his home in Jerusalem. Ebin wishes he had more time to visit the Golan with his wife and children.
Related Topics
Related Posts
Comments