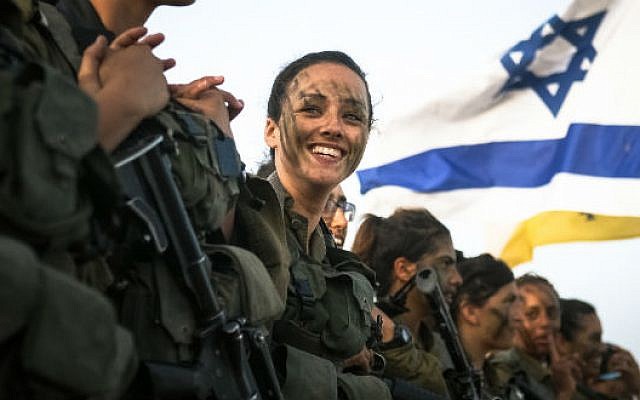 Female soldiers of the Israel Defense Forces. (via Twitter)

One of the most emotional and meaningful days of the year in Israel is Yom Hazikaron, or Memorial Day, when we commemorate our fallen soldiers. On this solemn day, families and friends will visit the graves of their fallen loved ones all over the country. Thousands of people will attend and tune into the state-run ceremony taking place at the Kotel, the symbol of the Jewish people.

Women have proudly served in our armed forces — and paid the ultimate price — since Israel’s earliest days. Mothers, wives, and sisters, have mourned the losses of their sons, husbands, and brothers. These women will be in the audience at the state’s ceremony. Yet on this day, one of the most solemn days of the Jewish calendar, we will not hear their voices. Women are not vocal participants in Israel’s Memorial Day ceremony at our holiest site. This leads to the inevitable question – Where do women fit into our national tradition?

On the international stage, Israel is often touted for its treatment of women, leagues more progressive than many of our neighbors in the region. Unfortunately, there is still much work to be done in order for women to be truly equal in this country. Our battle generally centers around our right to practice our Jewish traditions at the Kotel. We are fighting for our right to read from the Torah freely and safely at our holiest site. For this we are ridiculed, threatened, and even attacked on a regular basis. On Yom Hazikaron we are reminded that what we face at the Kotel every Rosh Hodesh is merely a symptom of a larger problem – the lack of women’s visibility in the State of Israel.

At last year’s Yom Hazikaron speech, IDF Chief of Staff Aviv Kochavi spoke about three bereaved mothers — Rachel from the Tanach, a woman named Nehama who fled Nazi Austria for Israel, and an anonymous woman representing the mothers of Israelis of all backgrounds. This speech positioned women as grieving mothers, left on the sidelines to mourn their loved ones. This narrative sadly fails to recognize the sacrifices that women have made for this country. And until women are given the opportunity to participate in the national ceremony, these stories and experiences will be ignored.

We consulted the Ministry of Defense regarding this year’s Yom Hazikaron ceremony at the Kotel, imploring his office to finally include women’s voices. We were not granted a meaningful response; instead, we were met with excuses, bureaucracy, and paper-pushing.

In a recent presentation I gave to soldiers, I spoke about Women of the Wall’s struggle for women’s rights at the Kotel. These soldiers — men and women, religious and secular — brought up the lack of women’s voices in national ceremonies. Throughout this discussion, it became clear that these issues are inherently intertwined. Women must be able to use our voices at our holiest site, whether in prayer or at our national ceremonies. Moreover, the same forces attempting to silence women on Rosh Hodesh are also actively silencing us on Yom Hazikaron. And the attempt to silence women’s voices is damaging to the nation as a whole.

How can we expect our daughters to feel empowered to take an active role in Israeli society if women are continuously shunned from national events? As a mother of two girls, I struggle to explain that Israel can on one hand lift women up, yet on the other hand silence us. How can I explain that we are still treated as second-class citizens at our holiest site? Finally, how can I explain to my own daughters that, even though thousands of women who have fought and died for Israel, we are not allowed to participate in our nation’s Memorial Day service at Judaism’s holiest site? It is too late to rectify this injustice this year, but we must do better for next year.