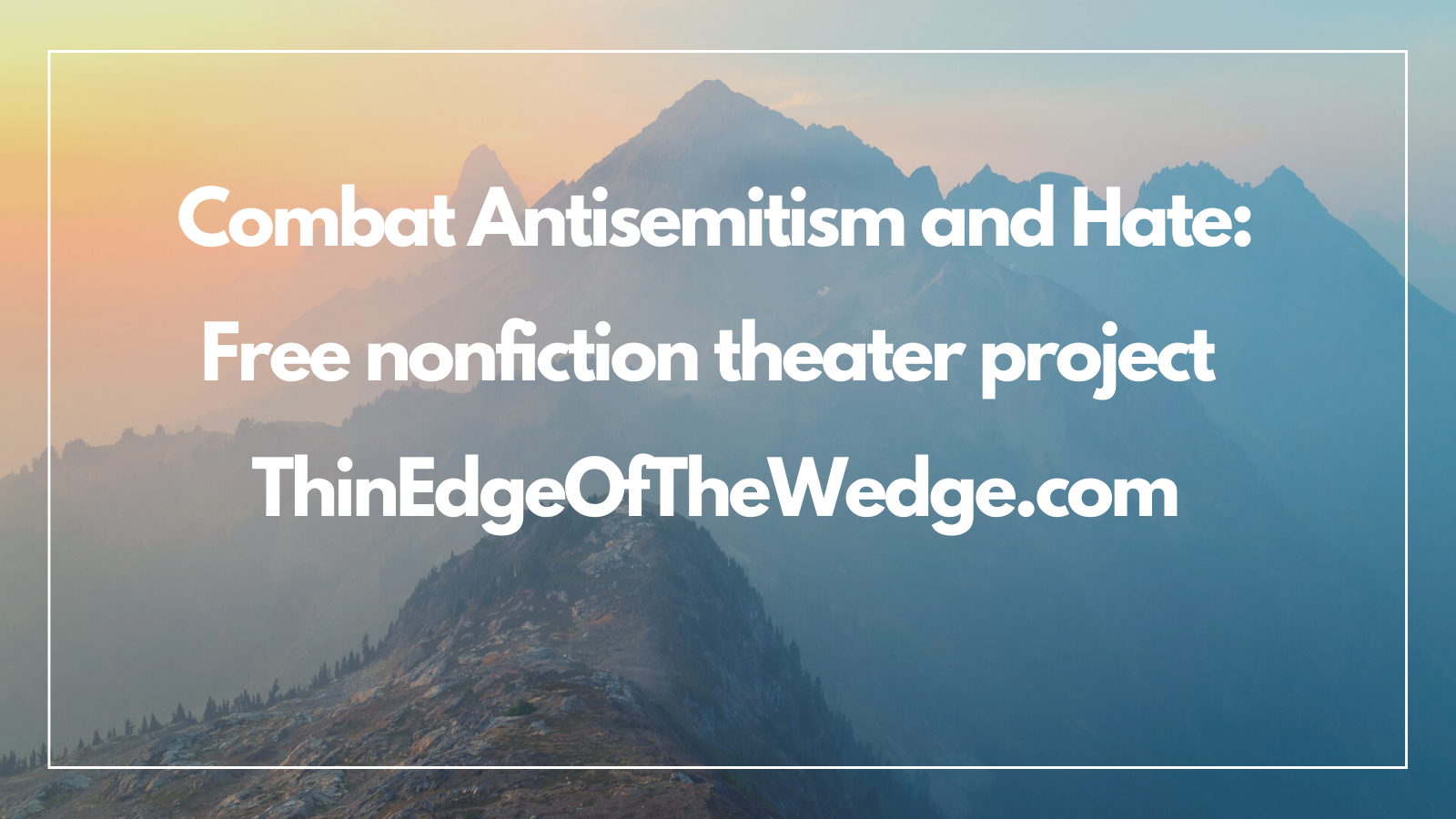 Since 1983 the Conservative congregation of Beth Am in North County in San Diego, California, has used a Holocaust Torah – a Torah from the exterminated Jewish community of Roudnice — 40 kilometers north of Prague. (You can read the story of this Torah’s journey to San Diego.) Although this Torah is used throughout the year, its use on Yom Kippur has a special significance.

The rabbi’s mention during Yom Kippur services of the synagogue’s Holocaust Torah, because it was a Czech Torah, reminded me of this firsthand account in my nonfiction play www.ThinEDgeOfTheWedge.com —

SOL
I am Sol and I am age 14 in Prague at the time of the announcement of the Munich Agreement [September 1938], for which Czechoslovakia has no say.  My father says to the family, “Go pack.”  My mother says, “Where will we go?  Our visas for Canada have not been approved.”  My father says, “To Romania.  My cousin there will supply a residency permit.”  I ask, “Why do we have to leave?  We don’t live in the Sudetenland of Czechoslovakia.”  My father replies:  “The Nazis will not be happy with eating only a little.  Their appetite is ravenous.  Czechoslovakia is no longer safe for Jews.”

PHYLLIS
Only six months later in March 1939, the prophecy by Sol’s father about the ravenous Nazi appetite was proved correct.  Nazi Germany swallowed up the rest of Czechoslovakia and there was no military response from other countries for this newest Nazi land grab.

I do not know if any Jews of Roudnice tried to escape the Nazis’ death grip, yet I do know of many firsthand accounts of Jews refusing to accept their fate as if they were sheep.

In the Martyrology Service in the Rosh Hashanah and Yom Kippur prayer book compiled and edited by Rabbi Sidney Greenberg and Rabbi Jonathan D. Levine is included “The letter of the ninety-three maidens” with this introduction:

When the Nazis captured Warsaw [September 1939], they ordered pupils and teachers of a Beth Jacob Girl’s School to prepare themselves to serve the pleasures of the soldiers. To avoid this defilement, the girls offered their last prayer, took poison, and died.

In the same prayer book section is an eulogy by Howard Kahn titled “At my Bar Mitzvah – and his” – “dedicated to the memory of a thirteen-year-old hero of the Resistance.”

While it is important to mourn and remember all the six million Jewish men, women, and children exterminated by the Nazis, we must not let the world define our fellow Jews as sheep willingly led to slaughter. We need to know that, when possible (and sometimes when not possible), many Jews did not go willingly.

To read additional information on this topic, see my blog post “Holocaust Myth: Sheep to the Slaughter” on my personal blog.

About the Author
Phyllis Zimbler Miller is a Los-Angeles based writer who is the co-author of the Jewish holiday book SEASONS FOR CELEBRATION, the founder of the nonfiction Holocaust theater project www.ThinEdgeOfTheWedge.com and the co-host of the NEVER AGAIN IS NOW podcast about antisemitism -- https://b.link/NeverAgainIsNowpodcast
Comments