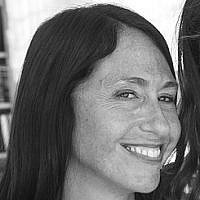 The Blogs
Lisa Ohayon
Apply for a Blog
Advertisement
Please note that the posts on The Blogs are contributed by third parties. The opinions, facts and any media content in them are presented solely by the authors, and neither The Times of Israel nor its partners assume any responsibility for them. Please contact us in case of abuse. In case of abuse,
Report this post.

My friend and neighbor who happens to be a journalist recently posted an article to her timeline on Facebook, a poignant account of the funeral of Dalia Lemkus the young occupational therapist stabbed to death while waiting for a ride home from work in the settlement of Alon Shvut.

My friend introduced the article with the sentiment that no matter what your politics, reading it is guaranteed to be heartbreaking. No sooner had I begun, and the tears were streaming down my face. For the murder of this amazing young woman, for her family, and for the unspeakable horror of parents burying children, witnessed far too often in this region for far too long. By the time I had reached the end, I had been brought to that place of raw sadness – the type of sadness where you cry with flowing tears and pouring nose.

It is the same type of raw sadness I felt when witnessing the horrifying sight of mothers buried under piles of rubble with their children in the Gaza summer sun, of entire families devastated, lives in ruins, with those left behind rummaging through what was once a home.

To test my friend’s assumption that the heartbreak would cross all political lines, I browsed the ‘comments’ at the bottom of the Ha’aretz article. I felt like I’d been sucker-punched in the guts by an aging prizefighter. The talkback hit hard enough to wind me but not quite enough to knock me out, since the vitriolic hate speech has by now become all too familiar.

“This land belongs to Palestine, israelies (sic) have no land they are a group of terrorist for going to hell”… “You palestines (sic) like to kill your children you have no value for life you give your kids guns and tell them to shoot soldiers and when they get shot you blame the jews”…“There is no such country as Palestine. Israel owns this territory and holds it with the blood of its citizens”… “Ha ha monkey corpse”…“these animals need to be driven out, this is our country, Jordan is theirs” …“lol more monkey corpses”…“no sorrow for her TIL (sic) israel demonstrates remorse for Palestinian men women children babies killed deliberately, u r nuclear state israeli cowards they r defenseless”

Even a comment that begins reasonably, that may offer a glimmer of hope soon becomes a rant: “I hate violence and killing of innocents…applying to both sides. Settlers are in fact big time terrorists as bad as Hamas if not worse”… and my personal favorite, “Israeli murderers go home!”

GO HOME? To where? Shall I tell my 84 year old friend Lotte who was thrown onto a kinder-transport to Britain by her desperate German Jewish parents, sheltered by Scottish nuns during the war, and then found her way to a kibbutz in Israel, that she must “go home”? Where exactly would that be? Should I tell my child’s teacher that she and her parents should return to the ancient Jewish community of Aleppo, Syria from where they fled all those years ago? Seriously? While the accusations, the denunciations, the vilifying, humiliating, mocking, dehumanizing and above all polarizing comments from both sides ceaselessly fly, it’s the “Go home!” that gets me every time. It arouses in me a rage, a pain, that deep sadness that lingers – perhaps because I thought I finally was home.

The notion that Israel is the result of a colonial enterprise has irrevocably damaged every effort at peace, at reconciliation, at reaching some kind of peaceful, even tolerable, co-existence here.
The very fact that the overwhelming majority of the people that poured into the state shortly before and especially after its founding were refugees who had absolutely nowhere to return to, renders the label ‘colonial’ nonsensical. These were not strong, armed, wealthy Europeans come to exploit the resources and labor of the natives. These were people who had either barely escaped ovens and death marches, or who had been viciously expelled from other Middle Eastern countries with only the clothes on their backs. Colonisers do not revive Hebrew, nor do they reclaim an indigenous culture rooted in an ancient past. You will not find a New Minsk or New Tripoli here!

Israel cannot – dare not – simply come to an end in the way that the French colonization of Algeria eventually did, or the Belgian colonization of the Congo The narratives of the “Nakba” and the “War of Independence” are so opposite, so mutually exclusive, that it is simply not possible to untangle them here. Suffice is to say that to speak of colonialism in this context muddies the waters to the point where the two sides in this conflict are not even inhabiting the same planet, and certainly not speaking any kind of common language.

I usually dislike comparing the Israeli-Palestinian conflict to that of Apartheid South Africa, but in this case it is illustrative. In South Africa, throughout the long and very trying process of negotiation for a new political dispensation that was to dismantle Apartheid and build a new society based on a new constitution and a bill of rights, THE LEADERSHIP made sure there was never any talk of white South Africans having to ‘go home’. THE LEADERSHIP made it perfectly understood that although the white population had come to be there through the odious process of colonization, they were now unquestionably South African with the right to as much protection and equality under the law as any other person. It was never a consideration that those South Africans would somehow ‘go back’ to the colonial power countries. It would have been completely ludicrous in that context and it is even more so in this one.

However one interprets the beginnings of the state of Israel – a highly contested question and one which contributes in no small part to the continuation of the conflict – it should be obvious by now that the state exists, that there are 6 million Jewish citizens of the state and that we and our state are NOT GOING TO GO AWAY. There is absolutely nowhere else to go (a fact made even more obvious by the wave of brutal antisemitic attacks that have taken place in almost every context where Jews live today from Australia to Canada to South Africa and throughout Europe).

Likewise, those Jewish Israelis who proclaim that “there is no such thing as a Palestinian people” that “they” must go back to Jordan or Egypt, are not dealing with reality. We cannot wish each other away, it will not work. It only amounts to hatred and violence, pain and discrimination. As long as opponents on both sides engage in wishful thinking rather than engaging with each other to find a resolution, this conflict will rage on. This is not about land, this is about mutual recognition and acknowledgement. As much as Netanyahu waxes about the need for the Palestinian leadership to recognize Israel as the nation state of the Jewish people, Jewish Israelis have to acknowledge the people on the ‘other side’ of this conflict. A people and their history cannot be wished away or legislated away, the only way forward is mutual recognition. The cries of “go home” only serve to strengthen extremist views, drown out the voices of moderation and entrench longstanding hatred and enmity. As long as the forces of negation on both sides are able to shout louder than the forces of acknowledgment there will be no peace.

So let us be very clear. Let us lay it out explicitly so that we can all understand what we are talking about here. Those calling for the end of Israel, those that gleefully chant “from the river to the sea, Palestine will be free” are extremist enemies of peace who refuse to acknowledge the existence and rights of the 6 million Jewish Israelis who live in the state of Israel, the overwhelmingly vast majority of whom have absolutely nowhere else they could possibly call home.

Equally, those Israelis that negate the existence of a Palestinian people, those that argue that there was never a Palestinian nation nor a place called Palestine, that the people who are claiming a right to the land are really just Jordanians or Egyptians who have fabricated a history out of Jew hatred and a desire to destroy the state of Israel, are extremist enemies of peace who refuse to acknowledge the existence and rights of the roughly 4.5 million Palestinians who live in the West Bank, the Gaza strip and East Jerusalem and who ARE NOT GOING ANYWHERE.

Those who have turned the word “Zionist” into a pejorative curse, and those that sneer at the notion of Palestinian statehood are extremist enemies of peace. Zionists exist in their millions; Palestinians exist in their millions – both with their history, with their version of how the state of Israel came to be, with their version of who suffered, died and bled the most, and with an unwavering conceptualization of who perpetrated the biggest injustices against whom. Yes I hear you dear reader, I hear the anger rising, the indignation bubbling to the surface: “There is no moral equivalence!”; “The Zionists stole the land, they must pay!”

One of my favorite songs of all time is Billy Joel’s Goodnight Saigon, a subtle anti-war song that points out the futility of it all: “And who was wrong and who was right? It didn’t matter in the thick of the fight.” Get over it! Let us move on before the mountain of corpses grows even higher, before more parents have to bury their young together with the hopes of yet another generation. Eventually we will sit down and come to an agreement because there is no other way. The only question is how many more will have to die before that happens?

About the Author
Lisa Ohayon is a South African born clinical psychologist with a Masters in Diplomacy and Conflict Resolution. She is a mother of four and has been living in Israel for the past seventeen years.
Comments