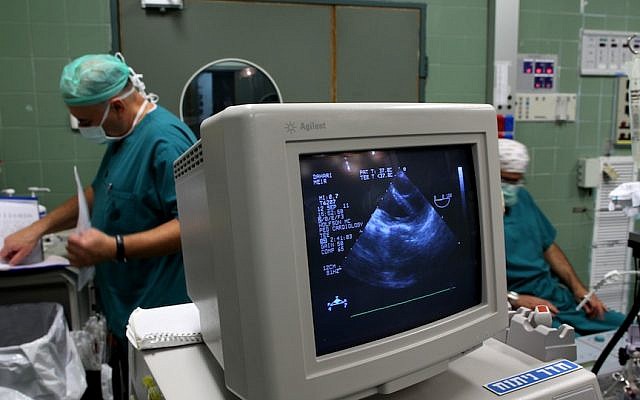 Medical devices in use in an Israeli hospital (Photo credit: Nati Shohat/Flash90)

I am incredibly fortunate to be married to a woman who opens our home to as many people who wish to be our guests on the Sabbath and holidays. The result is a very lively weekend, where we often have very strongly opinionated individuals discussing sensitive topics. Occasionally, voices get raised, but I am very proud of the fact that there is an overall air of friendship and love that really does make it all okay. I have to say also, that the food is always so amazing that people are usually distracted from getting too engrossed in any disagreement.

I have to admit that as I get older, I have become less tolerant of statements that are not founded in common bodies of knowledge. Whether it be from the newspaper, a particular magazine [like Newsweek or Time or the articles in Playboy] or a solid reference from the Internet, people should be able to quote the source on which their argument is based.

When the subject turns to medicine, which is my forte, I will often make a clear reference to a piece of research I recently read about, or the standard of care that is published by major organizations such as the American Medical Association  or the American Pediatric Association and the like. So when I say that vaccinating children for a given malady is worthwhile, it’s not based on anecdotes and personal prejudices. Admittedly, without the ability to Google a topic on Shabbat, arguments can still stray into the personal opinion arena. But most of the time, it is clear when an individual is speaking based on recorded data and analysis versus just voicing a personal opinion.

What is fascinating is how much of our “common knowledge” is inaccurate. Over this past holiday I was reading a very disturbing article about some of the events that occurred during the Yom Kippur war. If in the past I have made certain statements about how Israel managed its military during this period, I now have to update those statements based on what I’ve most recently read. Admittedly, two people can read the same data and come to opposite conclusions. But at least, both are talking from a perspective of knowledge, rather than myth.

A friend of mine once raised the point that there should be some type of service that allows you to  submit a phrase or even an entire article, and then have each statement validated based on the most recent research sources. For example, despite the fact that the newspapers have apparently forgotten about the Syrian war, the number of people who have been killed numbers in the hundreds of thousands. How many have been wounded? What services are really being made available to these people? How many refugees are there and how many countries are willing to take in a given number? I would not pretend to know the exact answers to any of these statements. But if I am writing an Op Ed piece on this situation, I should be speaking based on the most recent data. And I should be able to click a button and have any of the statements I have made, be validated based on the most recent information from multiple news sources, the UN, WHO and so forth.

This is a classic example where computers can be the ultimate assistant to an individual. Imagine being in a conversation, and an individual next to you makes an off-the-cuff statement that sounds incorrect. With an earpiece in place, and automatic validation of such spoken statements, a computer could feedback through the same earpiece a comment such as “the other speaker is incorrect in terms of the date of the war mentioned, and the other speaker is incorrect in terms of the countries that were involved in that war”. Imagine then opening your mouth and making those statements with the references. The person standing next to you might no longer wish to converse with you, but at the very least, the conversation is based on reality versus faulty memory. I should point out that if the person standing next to you is a handsome gentleman or a beautiful young lady, you might ignore what the computer is saying to you and simply agree with them in order to continue the conversation.

I’ve spoken in the past about a very near future in which we will be surrounded by an augmented reality that is constantly feeding information to us. Of course, the information will need to be set to us in such a way that it does not distract us from the action at hand [whether it is driving your car or speaking to a friend]. But in order to advance certain critical issues, whether on a small scale of an individual school, or a governmental level in relation to countrywide education,  the time is come that no one should be able to make an unfounded statement that can lead to an incorrect decision.

I personally look forward to the day when I have such an angel on my shoulder, tapping my head every time I say something stupid. Admittedly, I might very well end up with a small hole in my head, but hopefully, I will be far more careful in the statement that I make any advice that I give. If such an approach becomes standard, imagine how it would change the practice of medicine. Imagine that the director of a medical department makes a statement and immediately, all of the medical students are informed by their “Digital Angel” that the director is simply wrong. On the spot, the director’s conclusion would be challenged and the patient would benefit from the most recent data that has been selected out by the computer system. No more incorrect antibiotics. No more errors in the amount of fluids being given. No more incorrect selection of chemotherapy agents. You get the idea.

I guess my only remaining concern is that my Digital Angel will continue to tell me that the events occurring during one of the Marvel Avengers movies are impossible. So I guess we will need a “go to sleep” option as well.

About the Author
Dr. Nahum Kovalski received his bachelor's of science in computer science and his medical degree in Canada. He came to Israel in 1991 and married his wife of 22 years in 1992. He has 3 amazing children and has lived in Jerusalem since making Aliyah. Dr. Kovalski was with TEREM Emergency Medical Services for 21 years until June of 2014, and is now a private consultant on medicine and technology.
Related Topics
Related Posts
Nahum Kovalski
Comments