As many of you know, I love to listen to podcasts, and one of the podcasts that I listen to is Israel Story, an Israeli podcast that tells stories from people who represent a large range of experiences in Israeli society. Several months ago I opened the podcasting app on my phone and saw that the next Israel Story Episode had a title that I wouldn’t have expected from a podcast about Israel: Pigging Out.

Of course, Jews have long had an extremely strong taboo against eating pigs, and Muslims also don’t eat pigs, so it would seem surprising to talk about pigs in relation to Israel. The Jewish aversion to pigs is a deep one, including centuries of persecution in which the Jewish refusal to eat pig became a focal point for antisemites who see Jews as foreign. Jews have faced death rather than be forced to eat pig. However, despite the taboo, it turns out that while for some the pig represents all that is forbidden, unkosher, and even morally reprehensible, for others it represents freedom from religion and even a secular badge of honor. And, incidentally, it turns out there are wild boar in Israel. As it turns out, there was plenty of material for a very full podcast episode, all revolving around the pig.

The prohibition against eating pig, and other animals, goes back to today’s Torah reading, in Parashat Shemini. Today we read a whole long list of animals that we are forbidden to eat– the camel, the hare, seafood, birds of prey, most insects, lizards, and more and more and more.

Edwin Firmage, an academic who studies biblical laws of holiness, suggests an interesting theory in his article “The Biblical Dietary Laws”. In his view, permitted animals are similar to those which may be sacrificed to God. Cows and goats could be offered, and thus animals which could be eaten had to share similar characteristics.

At the end of chapter 11 of Vayikra, we are given a partial reason for our commanded selectivity in meat: “v’h’yitem kedoshim ki kadosh ani.” You shall be holy because I am holy.”

If eating kosher food makes us holy like God is holy, then perhaps it can be a reminder to us of the really important ways we can act like God in the ways that we treat each other. Food aside, here is something important that comes from trying to be like God. I’m reminded of a teaching from the Talmud, from Sotah 14a. In it, the rabbis ask, what does it mean to walk in God’s ways? If God, as the rabbis assume, doesn’t have a body, how can we walk in God’s ways? The answer given is that we can act like God. God clothes the naked, visits the sick, comforts mourners, and buries the dead—and so should we.

Another explanation of why we refrain from certain animals is that the food that we eat can make a statement about who we are. The medieval rabbi known as Nachmanides understands the list of animals in our Parashah as follows: “The reason for certain birds being forbidden as food is on account of their cruel nature. It is also possible that the reason for certain animals being forbidden is similar, since no animal that chews the cud and has a parted hoof is a beast of prey, while the rest all devour others.” Now this might seem counterintuitive – you might think that you should be kind to the animals that are kind, and that only the animals associated with negative traits should be eaten, but that’s not how Nachmanides sees it. In his view, you are what you eat. When you eat an animal, you internalize its qualities, and so you had better be careful to eat only animals that represent positive qualities. This explains why we do not eat birds of prey, because we don’t want to ourselves be aggressive attackers. There are a number of midrashim that seem to build on this idea, offering up depictions of some of the forbidden animals that associate them with negative qualities or behaviors. 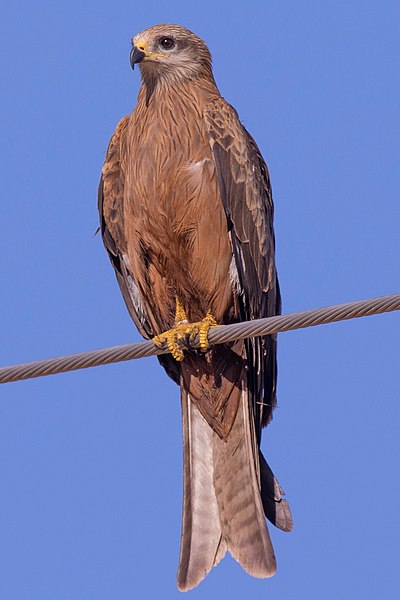 Rabbi Jonathan Sacks shares a midrash from the Talmud about the da’ah, or the kite, one of the birds listed in our parashah as being forbidden. “The da’ah flies around in the skies of Babylon and from there it can see a Neveilah (a trief animal) lying on the ground thousands of miles away in the Land of Israel’. Rabbi Sacks explains that the kite notices dead animals from far away. He understands this as an analogy to a person who looks far and wide for things to criticize. Even from hundreds of miles away, the kite notices a dead animal, in the same way that some of us may notice every error, every problem, no matter small, and we may latch onto that. He sees the prohibition against eating the kite as a call for positive thinking and for appreciating the blessings around us.

Another midrash centers on the hasidah, often translated as a stork. Since the name hasidah means “pious one,” it might seem like Nachmanides’s logic doesn’t hold. Rashi elaborates, saying that this bird got its name because it deals kindly with its fellows, giving them food. Well, isn’t that a good thing? Rabbi Eliyahu Safran explains. He points out that Rashi specifically says that the hasidah is generous with its own fellows, implying that it isn’t generous with anyone else. When kindness is only directed towards people who are similar to us, that, he says, is not truly righteous behavior. When we are only kind towards people who are like us, that is discrimination! This behavior can widen perceived gaps between groups of people, and can cause tremendous resentment and hurt. To eat the hasidah, then, would be to symbolically internalize division and discrimination.

The anafah, or heron, is also associated with particular qualities. The Talmud tells us that the heron is hot-tempered. In a play on words, it says that the anafah is mena’efet, quarrelsome. When we avoid the heron, we remind ourselves of the importance of keeping calm and getting along well with others.

If we see forbidden animals as symbolizing behavior that we want to avoid, then steering clear of them is just one way of trying to, like God, behave in a way that is “merciful, compassionate, gracious, slow to anger, and abundant in kindness and truth.”

Now of course, this type of explanation could probably be found for any animal. It is always possible to pick up on some trait or some word play on a name or some sort of aspect about an animal, and create a story about why that animal is worth emulating or not. In other words, none of these interpretations actually explains anything about why those animals are forbidden. Certainly, they are not historical explanations. Given that we know those animals are forbidden, however, these midrashim try to help us to imbue our food choices with added significance. They help make a dietary restriction into another opportunity to reflect on who we are and on who we want to be. 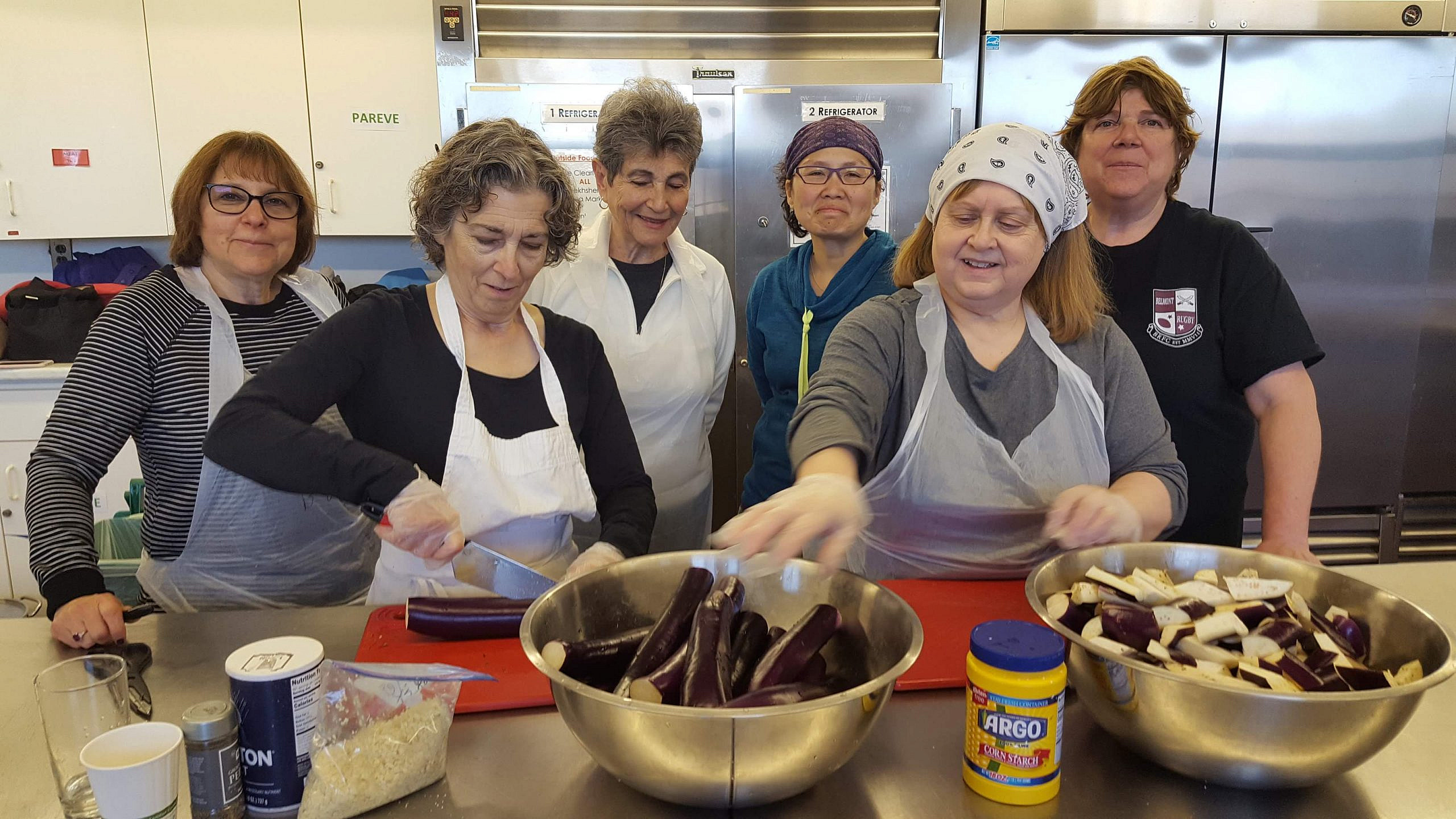 Cooking in the Temple Emunah kitchen

The experience of eating is so much more than simply nutrition. When we eat, we are connecting to cultural traditions, to personal memories, to ideas and feelings that we have about food and to messages we have internalized about food. Food can be an emotional experience– and it can also be a religious one.

A quick note: As many of you know, I am a vegetarian, so the idea of the symbolism of which animals we do or do not eat may seem somewhat irrelevant for me. However, I love the idea that, whatever types of food we eat, we can use our food choices to help remind us of the type of behavior we would like to embody.

May the food that we eat bring us closer to God not only by following the laws of kashrut, but by serving as a reminder to act like God by taking on God’s charitable and other positive qualities.