After Shabbat, I saw the reports that arsonists believed to be Palestinians from a nearby village, piled up Torah books in the synagogue in Givat Sorek, a Jewish community of Karmei Tzur, south of Jerusalem, and set them on fire. The outpost overlooks the location where the bodies of Naftali Frankel, Gil-Ad Shaer and Eyal Yifrah were found in 2014 and the synagogue was erected  their memory. The report was accompanied by a photo of the charred Torah books. 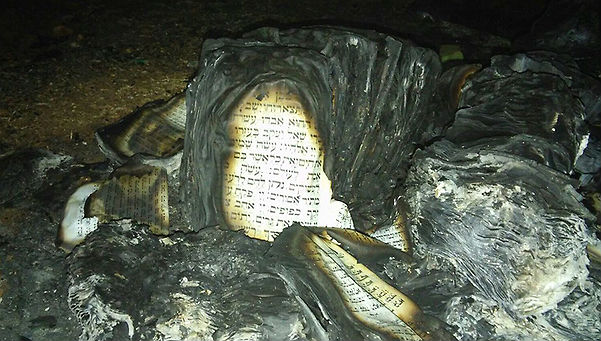 One report said,  “there were no injuries in the incident, but the books were badly damaged.”

Those words repetitively pounded in my mind like bad lyrics of a rap song and made me uneasy. I tried telling myself to calm down. We have been through much worse. My bitter reaction seemed disproportionate compared to all the loss of life we incurred at the hands of callous murderers. Yet the morbid feeling persisted and wouldn’t let go of me.

Anyone recalling scenes of book burning in history can relate to the morose feeling it elicits. Multiply that by the desecration of the holiness of these books of Torah and the posthumous degradation to the memories of Gilad, Naftali and Eyal made the incident too much for me to stomach.

The wave of nausea that I experienced when seeing the picture of our burnt holy books was overpowering. Jews are described as people of the book. Our entire identity is rooted in the Torah. Burning the Torah is not just burning ink and parchment. It is a destruction of something G-dly. Something meant to be eternal. It is symbolic of an attempt to destroy our past, present and future.

I went to sleep with a heavy heart knowing something beautiful and holy, that had the potential to live forever, was now gone. Then this morning I woke up to see on my Facebook feed that the powers that be had removed a post that simply says “Am Yisrael Chai” because it “doesn’t follow facebook community standards.”  If this is true as stated, one has to wonder why such a post necessitates removal. Is it against their standards that our people live and thrive? I wish I could say I am appalled or mystified, but sadly I am not. It seems to be the theme of the day. It’s yet  another symbolic attempt to destroy our legacy.

In an effort to defy the countless forces bent on our destruction I reposted  the banner “Am Yisrael Chai” and urged everyone I know to do the same.

In addition, I reaffirmed my commitment and devotion to Torah and I will try to learn more. The battle is overwhelming and tiresome. We shouldn’t have to fight this in our homes, on our own soil after all these years.

Will it ever change? I don’t know, but what I do know is that we have no other choice but to persevere. So I will do my best as I sign off singing “Am Yisrael Chai.”

About the Author
Aliza Lipkin fufilled her biggest dream by making Aliya in 2003 from the US. She resides happily in a wonderful community in Maaleh Adumim with her family. She is a firm lover and believer in her country, her people and her G-d. Her mission is to try and live a moral and ethical life while spreading insights based on Torah values to bring people closer together and help build a stronger nation.
Comments