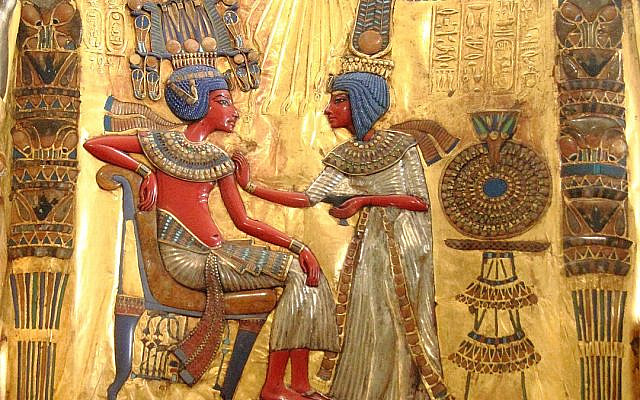 Did you ever pack for a trip not really sure what to expect when you arrive at your destination? You tend to throw things into your suitcase that  you may need such as a can opener, knife, rain gear etc. The Ancient Egyptians were the most advanced packers when preparing for their journey to the world to come. Apparently, archaeological evidence indicates that they knew they would need kitchen utensils, boats, food, and even servants for their trip.

In contrast, the Torah does not inform its readers what to pack. It doesn’t even tell us what to expect when we get there.

The parsha of Bechukotai contains the chapter of the blessing and the curse. If you keep God’s commandments, you will be rewarded, and the opposite is true for those who ignore God’s will. When we examine the verses describing the reward and punishment, it is surprising that all of the ramifications of our actions are described as occurring in this world.

Mitzvah observance is a spiritual endeavor; shouldn’t the rewards or punishments reflect that? Why is it that the rewards bestowed on the righteous are decidedly unspiritual and temporal?

Rabbi Tarfon in Pirkei Avot 2:16 says, “Know that the righteous are given their reward in the world to come.” The immortality of the soul is assumed based on its Divine source, so, presumably, the wicked also reap the consequences of their behavior in the next world.

Why does the Written Torah make no mention of the World-to-Come, instead stressing the material reward or punishment instead?

Throughout the generations, there have been a number of suggestions. In the 10th century, R. Saadiah Gaon explained that logic dictates the type of reward that awaits the righteous in the world to come and therefore it was not necessary for the Torah to mention it. Scrupulous devotion to God and His precepts are fundamentally spiritual acts that can only constitute reward properly in a limitless, non-physical world. Therefore, he continues, one cannot be rewarded appropriately in this world.

Unfortunately, the world is fraught with apparent injustices: the wicked prosper and the righteous suffer. It then follows that there has to be an alternative environment where everything balances out and everyone gets what they deserve.

Malbim (19th century) explains that the World-to-Come is not as much reward as it is consequence. If a person’s soul is elevated, developed and purified in this world, then it will naturally enjoy the spiritual nature of the return to its Godly source. Therefore, there is no need for the Torah to explicitly reference the World-to-Come.

The 12th century commentator Ibn Ezra believed that the concept is too deep to be elaborated on in Torah. Since the majority of the people would not understand the idea and the Torah was given to all, this complex theological construct was omitted. Inherently physical human beings can‘t fully grasp the prospect of non-physical reward and retribution. The Abarbanel (15th century) adds that that is why the Torah needed to report the rewards and punishments with physical expressions. This way, even the average person can understand, that eventually he will be rewarded. This aligns nicely with Rav Saadiah Gaon’s approach that it is illogical to conceive of physical rewards for spiritual actions and therefore needs further explanation than the Torah is wont to do.

Similarly, Ramban, in the 13th century, claims that our vocabulary is limited to those ideas and concepts with which we are familiar. Since no one has experienced the World-to-Come, we do not have the tools to describe or conceive this experience and any attempt to do so would trivialize and limit the reward (and punishment). The Maharal (16th century), points out that as opposed to other religions, Torah only promises physical rewards like peace and prosperity because that can be objectively measured and observed. Promises that need to be taken on faith alone are not included.

Maimonides (12th century) explains that descriptions of physical rewards are not actually compensation for positive acts rather, the Torah promises that God will remove impediments that could distract one from attaining spiritual heights by serving God. It is particularly difficult to serve God during times of war, disease, or famine, so God will remove these obstacles to allow one to follow the path of the righteous. Therefore, worshiping God should be for its own sake and not because of some expected payback in the future. In this world, then, there is no real reward, just Divine support (or the opposite) for continued practice.

Alternatively, one could simply say that the Written Torah is not meant to be a theology textbook. Its purpose is not to discuss the nature of God or the metaphysical and therefore refrains from any extended discussion relating to topics such as the afterlife, resurrection, or reincarnation.

The Torah’s goal is to instruct humanity on how to reach perfection and thereby enhance the world. Then, the world will function properly with the rain coming on time, for example, health, and peace. Nachmanides (13th century) suggests that the material blessings or punishments described in these verses are bestowed upon deserving communities, whereas spiritual rewards and punishments, which are reserved for the next world, are distributed to individuals. According to the Ramban, what is being described in Parshat Bechukotai is actually a hidden miracle. The Torah delivers a crucial message — that indeed a person’s actions do influence nature and world events. These collective rewards and punishments pertain to the conduct of the nation in their homeland. The soul’s immortality is obvious; because of the world’s miraculous nature, it is the seemingly natural consequences which need to be taught by Torah.

Abarbanel and Akedat Yitzchak (15th  century commentators) reject the question entirely, claiming that undoubtedly there is reward in this world! One only needs to see the elation and contentment experienced by those who connect to the Divine. Proximity to God, as stated in Torah, is the ultimate spiritual reward.

And you who cleave to the Lord are alive everyone of you, to this day.