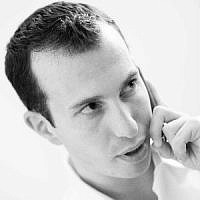 The Blogs
Avi Hyman
Apply for a Blog
Advertisement
Please note that the posts on The Blogs are contributed by third parties. The opinions, facts and any media content in them are presented solely by the authors, and neither The Times of Israel nor its partners assume any responsibility for them. Please contact us in case of abuse. In case of abuse,
Report this post.

I wrote the following on Facebook after absorbing the news that my college buddy Steve Sotloff had been savagely executed by ISIS.

Steve…
Your story was cut short but you told it well my friend.
You travelled far and wide and became at one with the tale. You told the stories that others ran away from. You ventured into lands that knew no order and made order, to tell the world what you saw. You partied hard and studied hard, because for you half a story wasn’t a story. You were a friend to everyone and everyone’s friend. Most of all you told us what lay behind the hype and headlines. You knew your subject because you became at one with it. You kept your own story close to your heart but never forgot where it began.


It shook us all to the core to see your last chapter. What should have been a great comedy twisted out of control into a colossal tragedy. Yet you told the last chapter in person, face to face with the world. You did what a million newspapers and TV channels couldn’t do. You took us into hell and let us look the devil in the eye. You no longer wrote in ink, you had become the story.

The 2LivesFoundation was established in Steve’s memory:

About the Author
Avi Hyman is a Jerusalem based PR professional with over a decade of experience in both the public and private sectors. He is a veteran of the IDF Spokesman's Unit and graduate of the Interdisciplinary Center in Herzliya.
Comments