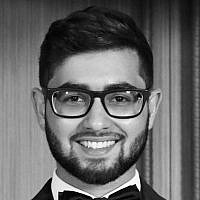 The Blogs
Avner Yeshurun
Apply for a Blog
Advertisement
Please note that the posts on The Blogs are contributed by third parties. The opinions, facts and any media content in them are presented solely by the authors, and neither The Times of Israel nor its partners assume any responsibility for them. Please contact us in case of abuse. In case of abuse,
Report this post.

In November, students at the University of Miami attended a discussion at the Braman Miller Center for Jewish Life with Mizrahi activist Hen Mazzig about the experiences of Mizrahi Jews and their connection to the State of Israel. His story is the story of so many Mizrahi Jews. Now more than ever, it must be told and understood.

In 1941, Hen’s Iraqi grandparents survived a series of Nazi-inspired pogroms against the Jews of Baghdad known as the Farhoud, meaning “violent dispossession.” On June 1st, 1941 and for several weeks thenceforth, masses of armed terrorists took to the streets and massacred, tortured and robbed their Jewish neighbors. The wave of violence was a tragic blow to the once vibrant ancient Iraqi Jewish community.

The attacks came after years of intensifying antisemitism at the hands of the new Iraqi government backed by Haj Amin al-Husseini, the Grand Mufti of Jerusalem and a Nazi collaborator. Between 1936 and 1941, Iraq banned the Hebrew language in schools, barred Jews from access to schools and universities, ousted Jewish politicians and eventually treated Jews as outlaws, allowing Muslim leaders to extort and murder them without consequence.

Fearing for their lives, Hen’s Iraqi family fled Iraq for the Jewish homeland, carrying what was left of their lives in a single suitcase.

I connect with Hen’s story as a Mizrahi Jew of Persian-Yemenite descent. My great-grandmother and grandfather emigrated from Yemen and Iran, fleeing persecution in their respective countries. Our families are among the 850,000 Jews displaced from their communities across the Arab and Muslim world.

Jewish communities have lived across the Middle East and North Africa even longer than the religion of Islam has existed. Despite living in the shadow of great empires that imposed forced migration and exile, these communities retained their connection to the land of Israel. The land of Israel (Zion) has been continually present in our prayers and traditions for thousands of years.

With the rise of Islam in the seventh century, Mizrahi Jews were made to live as second-class citizens and persecuted. They were eventually forced to either convert or leave. This led to periodic attempts to return to the Land of Israel, which proved difficult because of discriminatory policies that limited movement in the Middle East. Despite this, small long standing Jewish communities remained in the land of Israel in Jerusalem, Hebron, Safed and Tiberias, while some Jews living across North Africa and the Middle East made the arduous journey home.

The return of Mizrahi Jews to Israel has brought an end to centuries of second-class citizenship, ethnic cleansing and repression. Unfortunately, a vocal minority remains unwilling to accept the integration of both Jews and Arabs and the reality of Jewish indigeneity to the land of Israel.

For instance, Susan Abulhawa of Al Jazeera, a media outlet known for peddling antisemitism and spreading conspiracy theories, published an article with a fabricated account of Israel’s founding:

“Although it [Israel] was a project conceived in Europe by Europeans and for European Jews, they lacked sufficient numbers to build a population large enough to conquer the indigenous Palestinian population. Thus, the recruitment of Jews from the surrounding Arab world was a necessary inconvenience. They did so through propaganda and by creating false flag terror incidents (bombing of synagogues or Jewish centres) in order provoke an exodus of Arab Jews.”

Abulhawa’s account is simply wrong. Jews in Arab lands were not “recruited” by propaganda or otherwise; their Arab neighbors drove them out; violent dispossessions fueled by years of second-class treatment and antisemitism took place between 1948-1951. Furthermore, Abulhawa’s use of the term “Arab Jews” is incredibly problematic; Jews were not considered Arabs or treated equally because of apparent ethnic and religious differences and to suggest otherwise is disingenuous. See CAMERA Fellow Rahel Friedman’s recent article for more on this topic.

Sadly, erasure of Jewish history and other forms of antisemitism are not confined to propagandistic, biased media sources like Al Jazeera.

Recently, the University of Miami School of Law hosted Ahmad Abuznaid–who openly supports the movements of Yasser Arafat and Leila Khaled and who has claimed that Israel is indistinguishable from the KKK–in an event focused on Black-Palestinian solidarity. In a scene reminiscent of the antisemitic atrocities of the Middle Ages, a panel of non-Jews debated the right of the Jewish state to exist, vilified the only majority-Jewish country on Earth, and erased Jewish culture and history before the eyes of an earnest audience who knew no better. The most startling point was the apathy displayed by the deans, who, despite repeated attempts by me and others to contact them before the event about its dangers, did not so much as reply. Read CAMERA Fellow Shannan Berzacks’s in-depth analysis of the event here.

Additionally, speakers advocating for Mizrahi visibility have been met by angry protestors, who often shout them down with antisemitic slurs and threats, forcing events to be canceled.

In November of 2019, a mob of protestors disrupted an event with Yoni Michanie, an educator with Syrian Jewish ancestry, at a student-organized event at the University of Florida. Michanie tweeted a video and had this to say about the disruption:

“100 people walked out of my event to protest. Holding signs that accused me of being a Nazi. A war criminal. And a filthy colonialist. Posing as peace activists, they shut down dialogue to promote violence.”

The time has come to demand that the world educate itself about Israel and the Jewish people. I am proud to have participated in Mizrahi Heritage Month. It has been enriching to revive the stories of Jews from Arab lands. If not for our longstanding connection to the land of Israel and the establishment of the State of Israel, I would not be here today. Hen would not be here today. Educate your friends and family about the reality of life for Jews in the Middle East and North Africa. Be like Hen. Stand for the truth and defend it.

About the Author
Avner Yeshurun is a student at the University of Miami, studying finance and accounting. He is a 2021-2022 CAMERA on Campus Fellow, and the president of the campus pro-Israel group, Canes for Israel. He lives in Miami Beach with his wife Elisheva.
Related Topics
Related Posts
Comments